In an attempt to justify Westpac’s 45 basis point jump in standard variable mortgage rates, Westpac Bank created a longwinded video parable drawing an analogy between the worldwide financial crisis and a storm that devastates a crop of bananas, thereby driving up prices of banana smoothies.

“Once upon a time, there were big lush fields of banana crops, but one day a terrible storm rolled in and hit the banana fields,” the video’s narration says. “So the crops were damaged and there were not enough to go around. Because of the devastating storm, the price of bananas went up and it cost more to make a banana smoothie, that’s why the price of smoothies increased.”

“In some ways a bank is really just like the company that sells banana smoothies,” the narrator continues. “In 2007, the world of money changed. The money that banks needed to buy started to cost them a lot more, just like the bananas for the smoothies.”

Reality Check: The video is condescending. Even worse, it’s a lousy analogy.

Westpac’s attempt to rationalize its cost structure comes off as an childish oversimplification. The video seems similar to the wildly popular internet animation, “The Crisis of Credit Visualized,” but Westpac’s lame logic only makes the bank look farcical and cartoonish. It’s almost as if the bank is saying, “We have done nothing wrong. It’s not our fault we increased our rates more than any other bank. Besides, the only reason we hike interest rates is to make the dream of home ownership a reality for more Australians.”

It’s worth noting that Westpac’s current stated marketing aim is to “delight the customer.” Meanwhile, the company’s top banana got a $2 million bonus on top of her $10 million salary last year, something unhappy Westpac mortgage customers are quick to point out.

Westpac sent the video to its customers via email a few days following a recent rate hike, and the bank has been under fire across Australia ever since.

The bank’s banana blunder has transcended into Aussie pop culture. Now known as “Bananagate” or “Banananomics,” the Westpac video has been parodied on YouTube, mocked in blogs and editorials, and sparked a petition that has already been signed by thousands of Australians. Even the Australian Prime Minister Kevin Rudd is blasting the bank.

“I think Westpac should have a long hard look at itself,” Prime Minister Rudd said on an Australian radio show.

In his view, the bank had done “the wrong thing” with its rate hike, and urged people to take their business elsewhere.

“Customers out there should be looking at where else they can do their banking,” he said.

Despite the criticism, Westpac feels confident about its policies and offers no apologies.

“We understand that people have different levels of understanding about the way banks get their funding,” a Westpac spokesperson said. “We also know that people don’t like our explanation for our rate rise.”

Reality Check: If you want to get yourself out of a hole, the first thing you should do is stop digging.

NAB, the only major bank to follow the Australian Reserve’s 25 basis points increase in interest rates, decided to take advantage of the situation by sending out street teams to canvass Westpac branches for unhappy customers. Even if NAB doesn’t attract as many new accounts as it hopes, the move is still a PR boon. 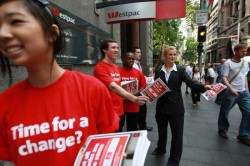 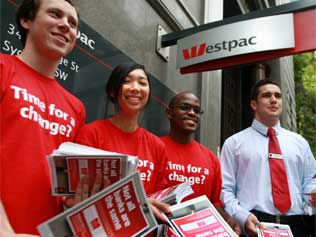 NAB STREET TEAMS
Smelling opportunity, NAB had employees hand out pamphlets outside the branches of its rival Westpac in response to ‘Bananagate.’

Indeed it would seem every home lender in Australia owes a bit of thanks to Westpac. The bank has inadvertently elevated “refinancing” to the top of every Australian’s mind, right in the wake of something that would normally be seen as a big negative — a mortgage rate hike. Westpac has, in effect, created an opportunity for its competitors to say, “See, everyone’s rates have gone up, but we’re not that bad. You should come in and talk to us about refinancing your mortgage… perhaps over a banana smoothie?”

Once upon a time there were big lush fields of banana crops, but one day a terrible storm rolled in and hit the banana fields. So the crops were damaged and there were not enough to go around. Because of the devastating storm, the price of bananas went up and it cost more to make a banana smoothie, that’s why the price of smoothies increased by 50 cents. The end.

We all understand this story right? A plus B equals C. But the same formula seems so much harder to understand when it comes to talking about money, about lending, about mortgages, and about banking.

In some ways a bank is really just like the company that sells banana smoothies, a bank is a business that buys and then sells something, only in the bank’s case, that something is money.

When an Australian family wants to buy a home, they borrow the amount of money they need from the bank, and the bank ‘sells’ them the money, and they buy the house.

Now here’s the thing. One of the bank’s biggest secrets is that they don’t have all the money they need to do this, so they borrow it from somewhere else. And then suddenly, there was the equivalent of a terrible storm.

In 2007, the world of money changed. The money that banks needed to buy started to cost them a lot more, just like the bananas for the smoothies. All across the world, there was tremendous worry and fear. This created a ‘knock on’ effect, and soon, money to buy at any price was in very short supply.

The fear and worry continued to grow, and move all around the world until the unthinkable happened when some of the biggest, most respected institutions went down and the governments did not come in to bail them out. This increased the fear that the global financial system might actually collapse.

Belts got tightened. Banks stopped lending to each other. And governments finally had to step in and help in the hope that things could be saved.

As Australians first bank, Westpac has always held close the need to do the right thing by our customers — today, and every day, but not at the risk of harming tomorrow. When a storm blows in, we have to ask ourselves some very serious questions. We need to batten down the hatches but still ensure our foundations are safe for future storms.

Many Australians dream of owning their own home, and we don’t take that lightly. Our dream is to make sure Westpac can weather any storm, so that we can turn dreams into reality for Australian families. At times, we have to make decisions that make us unpopular, but being popular is not our focus. Our focus is to ensure that we remain a healthy Australia business, so that we’ll there for Australian families when they need us. And that means being there for today and tomorrow.