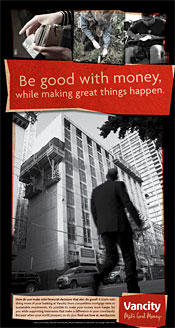 “Make Good Money.” That’s the new positioning statement anchoring Vancity’s brand strategy. The $15.5 billion community-focused financial institution based in Canada’s beautiful British Columbia chose the new catchphrase for the blend of messages it sends: That people can (1) make money do good things in their community while (2) making “good money” for themselves by (3) making good money decisions. To put it more simply: Banking with Vancity is good for you… and for the community.

The underlying psychology of “Make Good Money” is that consumers can make a difference without it costing anything; it’s easier and cheaper than making a donation.  It’s a slogan that assumes a certain morality inherent in money — that there is “good” money and “bad” money.

The campaign eschews tired shots of tourist Vancouver, favoring documentary-style images of scenes that are familiar only to locals.

Vancity will be expanding this online interactive map with examples of how it puts people’s money to work in good ways. This is a brilliant component of the campaign, and something other community-based financial institutions should consider. 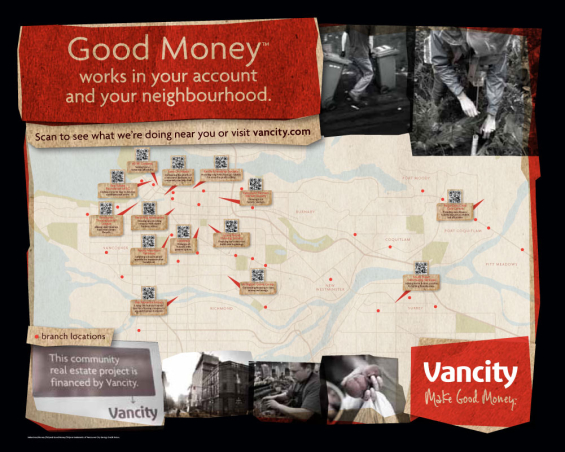 At the center of Vancity’s brand is the concept of ‘balanced prosperity,” a strategy driven by a “triple bottom line” of financial returns, social returns and environmental returns.

“The new brand theme establishes a connection between consumers banking and the good that Vancity does,” Seres adds. “It speaks to the impact people can have on their community simply through the financial decisions they make.”

Socially responsible banking is not a new concept to Vancity. For the better part of a decade, Vancity has steadily built its brand around a passionate belief in community reinvestment — using people’s money to do good things.

One of the first socially responsible products Vancity rolled out was its EnviroVISA card, where 5% profits go to an environmental fund chosen by cardholders. In 2004, they rolled out Bright Ideas Home Financing for energy efficient home renovations — a first in Canada. They have term deposits and mutual funds that invest in socially responsible companies. The Clean Air Auto Loan provides preferential rates to buyers of fuel-efficient cars. And Vancity’s Shared Success program returns 30% of overall profits back to members and the community. Since 1994, Vancity says it has invested over $194 million of its profits into communities through grants and various other programs.

While Vancity is technically a credit union (Canada’s largest, with 417,000 members and 59 branches), it is this elevated sense of social consciousness that makes them feel like an idyllic local banking cooperative — a place where people pool their financial resources to collectively make the world a better place.

Key Takeaway: Brands are built by what you do, not what you say or promise. There are many financial institutions out there claiming to be strong supporters of their communities, but often they don’t do much more than donate to a few charities.

“It’s nice to have integrity behind your claims,” adds Seres.

Vancity does more than just design do-good banking products. Back in 2005, Vancity committed to being carbon-neutral within five years. It took them only three, making them the first North American-based financial institution to achieve that goal.

Vancity goes further. They target segments of the community often overlooked by financial marketers. For instance, they created a micro-credit toolkit for non-profits serving new immigrants. They have programs specifically for Canada’s aboriginal peoples. And Vancity’s support for the LGBT community is well documented. They even created a special subsite — vancitypride.com — built specifically for a gay audience (now inactive). 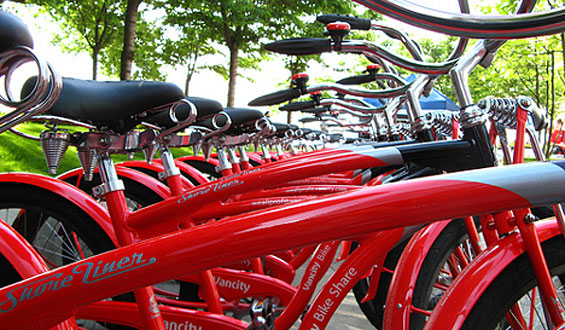 A Work in Progress

Before they found their footing with socially conscious banking, they were using slogans like “It’s Right Here” and “Expect Better.” It wasn’t until 2006 that Vancity started weaving messages about its “mutually beneficial banking” philosophy into marketing. That year, as themes of “Shared Success” first started to percolate, they rolled also out ChangeEverything.ca, a social media community that fostered social activism in local communities.

The new “Make Good Money” replaces “We All Profit,” a tagline Vancity had used in recent years to summarize its position. Similar to “We All Profit,” the new mantra joins the concept of banking and social goodness.

“It brings together the ‘me’ and ‘we,’” says Vancity’s Seres. “It links one’s personal finances with the collective good it accomplishes.”

But what Vancity really likes about the latest iteration of its catchphrase is its direct connection with one’s personal cash status.

“It really hits much harder on ‘money,’” Seres explains.

Internally, Vancity had been describing itself as “a good neighbor and a damn good banker.” But this statement frustrated Vancity’s leaders, who saw it as an inelegant mashup of two separate concepts.

“There was actually quite a bit of internal push against this statement because it reinforced where we were, not where we wanted to be,” recalls Seres.

“We have been desperately trying to take the ‘and’ out of that sentence because it reinforces that there are ‘two different things we do.’ Our new strategy aims to merge these concepts by eliminating the ‘and.’ That is, members make good money by putting money to good.”

“It’s an important nuance, one internal stakeholders are quite conscious of, most notably our CEO,” Seres stresses. 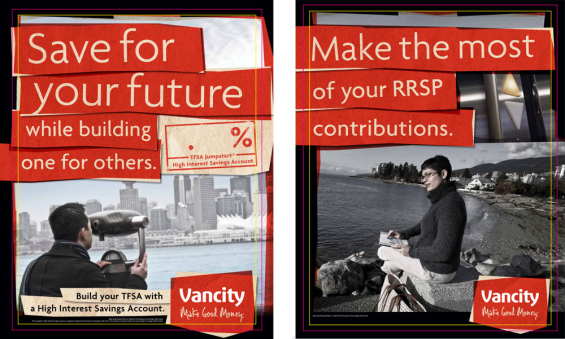 Through research conducted during the brand development process, Vancity discovered people already knew that Vancity was doing great things for the community. What consumers needed to know was that socially responsible banking wouldn’t require them to make financial sacrifices — that people could, in effect, “make good money” for themselves while doing nice things for others.

“Vancity has always rightly been recognized and loved for the contribution it makes to the well-being of its communities,” said Vancity’s agency partner Wasserman + Partners. “But what hasn’t been well understood is that they are equally committed to member wealth.”

Formal development on the new identity and slogan began in late 2010. A few months later, the concept and new Vancity look was nailed down.

And for Vancity, it is a different look indeed. Instead of the bright rainbow palette and geometric shapes Vancity used previously, the new design is more stark and serious.

“No large shoot, no video village and catering trucks,” explains Wasserman + Partners. “Instead a small team went out documentary style to capture Vancity members and communities where they live and work.”

To make sure staff were onboard with the rebranding, Seres says Vancity “spent a lot of energy getting ‘the inside’ onside.” They produced an internal video for its 2,397 employees featuring Vancity CEO Tamara Vrooman and a group of frontline staffers talking about how they live out the brand promise.

Seres says internal reaction across staff and management has been enthusiastic. “Everyone wants to put ‘Good Money’ into everything.”

Earlier in the year, Vancity began airing a one-minute brand spot and two 30-second product-focused TV commercials. All the people featured in the TV commercials are real Vancity members and staff.

“They get to the heart of our new Good Money brand platform, which connects the dots between the business our members do at Vancity and the work Vancity does to support the communities where we operate,” says William Azaroff, Vancity’s digital and community engagement director and the voiceover narrating the spots.