Subscribe Now Get The Financial Brand's FREE Email Newsletter
A survey from the FDIC in partnership with the U.S. Census Bureau sheds light on the demographics and needs of the un- and underbanked. But maybe retail financial institutions aren't interested?
Subscribe Now!

According to a bi-annual survey fielded by the FDIC, The vast majority of all U.S. households (88.4%) own a checking account. However, one in 13 households is unbanked, representing 9.6 million households with 25 million people (16.7 million adults and 8.7 million children). The proportion of unbanked households has declined slightly, from 8.2% in 2011 to 7.7% in 2013.

One in five or 24 million households are underbanked. Approximately 50.9 million adults and 16.6 million children lived in underbanked households.

The FDIC defines “unbanked” do not have any accounts with an insured institution. Anyone who has an account but has also obtained financial services and products from non-bank, alternative financial services (AFS) providers in the prior 12 months is considered “underbanked.” 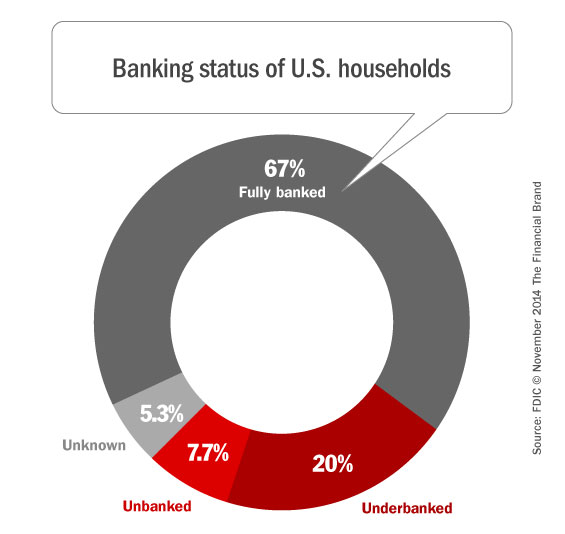 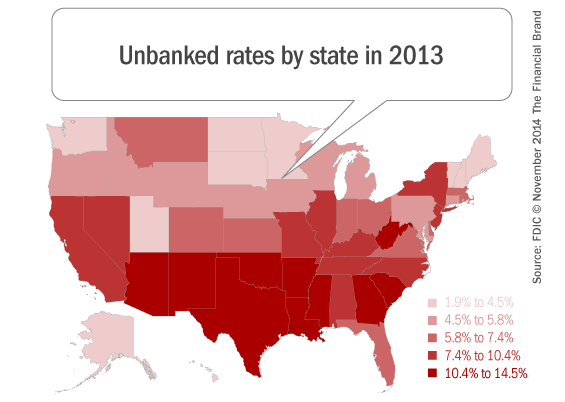 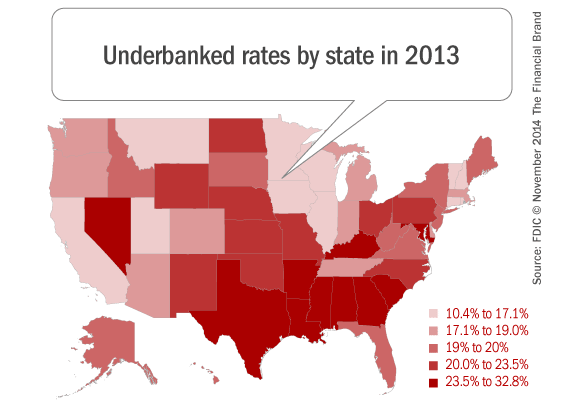 57.5% of unbanked households reported not having enough money to meet a minimum balance as a reason they did not have an account; 35.6% reported this to be the main reason.

34.2% of unbanked households reported their dislike of or distrust in banks as one reason they were unbanked; 14.9% reported this to be the main reason.

30.8% reported high or unpredictable account fees as one reason they did not have accounts; 13.4% reported this to be the main reason.

34.1% of households that recently became unbanked experienced either a significant income loss or job loss that they said contributed to becoming unbanked. 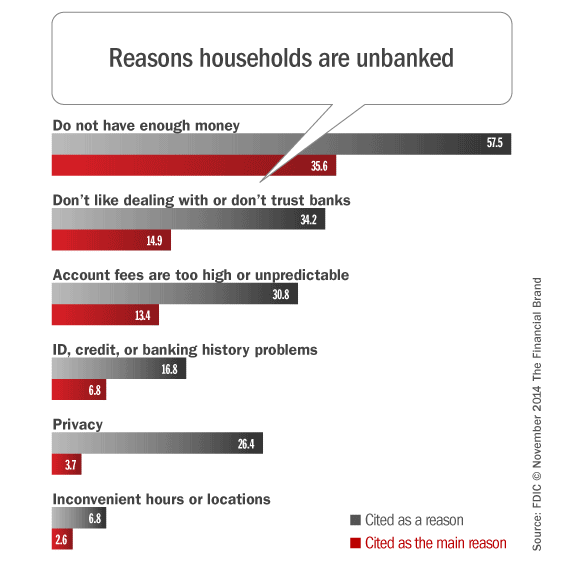 Among households that recently became banked, 19.4% reported that a new job contributed to their opening a bank account.

One-quarter of households have used at least one alternative financial service (AFS), such as non-bank check cashing or payday loans in the past year. In all, 12% of households used an AFS in the past 30 days, including four in 10 unbanked and underbanked households. AFS use is relatively high among unbanked households: 63.2% used an AFS in the last 12 months. Use of AFS transactions (e.g. check cashing) are much more common than the use of AFS credit (e.g. payday lending).

“The FDIC and the Consumer Financial Protection Bureau have been pretty vocal about the fact that they want to decrease consumer use of alternative financial services,” says Emily McCormick with Bank Director. “Will these regulators make a move to ensure that more Americans have access to a bank account?”

Whether regulators force banks to serve these consumers or not, Joan Susie at Bank Director says retail institutions are missing an opportunity.

“With well priced and carefully conceived products, these customers can be profitable,” Susie says. “Large banks, nonbank financial services companies and a few community bank pioneers are quickly realizing there is an even better reason than CRA credits to bank new immigrants and other underserved populations.”

Susie says that if banks don’t seize the opportunity, other players in the financial industry will.

“It is becoming clear that the biggest and savviest financial institutions are actively exploring ways to profitably provide access to credit and financial services for a significant segment of the population struggling financially,” Susie says. “The payday loan, with its predatory history and image, isn’t the only way to address this market.”

About 23% of bankers say underbanked customers present their greatest growth opportunity, according to a survey from KPMG.