Subscribe Now Get The Financial Brand's FREE Email Newsletter
In a Trump administration, the banking industry must take matters into their own hands and lead from the front in order to protect consumers' growing — but frail — trust in financial institutions.

So what will happen to the banking world under a Trump presidency? The bombastic candidate Trump grabbed attention with dramatic, sweeping headlines (“Donald Trump Plans to Impound All Remittances to Mexico”), giving the perception of industry-altering change ahead.

While uncertainty reigns, the President-elect’s hesitancy to expound on financial policy calls into question the difference between perception and reality. It really boils down to a question of where regulatory priorities are placed, and which leaders are appointed to oversee the financial services industry.

Among President-elect Trump’s original shortlist were a number of interesting choices, including Rep. Jeb Hensarling, current chair of the House Financial Services Committee and Henry Kravis, the billionaire private equity pioneer. The nomination, however, has gone to Steve Mnuchin, a second-generation Goldman Sachs partner and the Trump campaign’s national finance chairman. Mnuchin was also a co-purchaser of IndyMac and co-founder his current firm, Dune Capital.

The perception the Trump camp battled for a few weeks revolved around the question, “Who best fills this position?” The reality they face now? “Is Mnuchin actually confirmable?” He would be the third former Goldman employee to head the treasury since the mid-1990’s and reinforces the “Government Sachs” moniker, which does not play well with Main Street. Also called into question are cases being filed against him and his former company, OneWest Bank, after two housing advocacy groups filed claims to the Department of Housing and Urban Development calling for an investigation over allegedly redlining minority home-buyers. His appointment will require confirmation by the Senate, and these ties to the industry will likely become a major focus as progressive groups mount opposition.

Regardless of Mnuchin’s potential confirmation, the issues such as Dodd-Frank, the restructuring of the Consumer Finance Protection Bureau (CFPB), Wall Street regulation, and Congress itself is very different than what the U.S. is likely to see in reality.

When it comes to Dodd-Frank, the perception that it will be swiftly and systematically rolled back is one that Main Street may fear most. In reality, large financial services companies have worked much too hard — and spent too much money — streamlining their business units in the last five to eight years. While the administration may seek to revise pieces of Dodd-Frank (including the Volcker Rule and liquidity requirements), it is unrealistic to think Dodd-Frank will be unwound.

The CFPB is the consumer’s cop on the beat. Not keeping the consumer’s interests at top of mind is what got Wall Street in trouble in the first place. While the reality is that this organization may see some restructuring, the perception that the Trump administration would do away with this regulatory body is unlikely given his rise to office by a populist movement.

Congress itself may present the penultimate perception vs. reality issue. Republicans (who have control of both chambers and the White House for the first time since the George W. Bush administration) pushing through all legislation they choose is a myth. The most likely scenario here is that when most legislation passes, it will have done so with compromises made from both the Democratic and Republican side. For example, the Department of Labor’s “Fiduciary Rule,” targeted by the GOP for rollbacks, will be shepherded by the balanced leadership platform of Mike Crapo (R-ID) and Sherrod Brown (D-OH) of the Senate Banking Committee.

1. Do Not Actively Seek Less Oversight 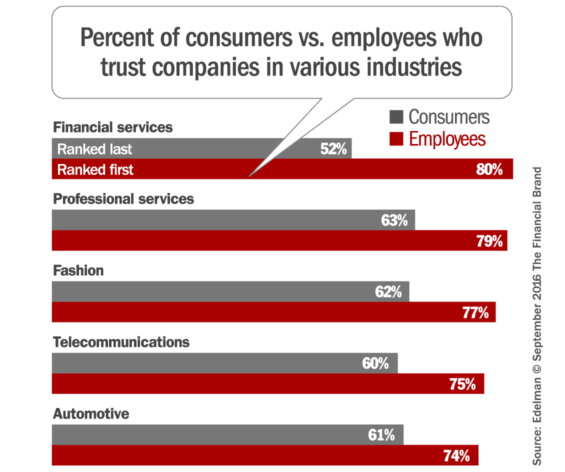 The world is moving faster than anyone would have imagined. For financial services companies to achieve success in an environment of regulatory uncertainty and leadership change, it is imperative for them to not actively seek less oversight, focus on their employees, develop deeper, more meaningful relationships and interactions with their consumers, and above all — lead from the front to earn and build trust.