Subscribe Now Get The Financial Brand's FREE Email Newsletter
The ten largest retail bank brands in the U.S. stand to lose a combined $92 billion in deposits next year. Smells like opportunity for everyone else.
Subscribe Now!

A multiyear study from cg42 ranks the top 10 most vulnerable national retail banks in the U.S. According to the analysis, Citi is now the bank most vulnerable to losing customers, deposits and revenue. Two years ago, that was not the case, back when BofA was the most likely to see high attrition and defections. BofA now ranks third.

The report is a follow-up to cg42’s previous research back in 2011. The study is based on a proprietary ” Brand Vulnerability Index” (BVI) that measures consumer frustrations and calculates the risks associated with each bank brand.

What is Brand Vulnerability?

Brand Vulnerability is a measure of a brand’s level of risk for increased customer attrition, decreased acquisition effectiveness, and the associated financial loss based on an analysis of the frequency, impact, and uniqueness of the frustrations their current customers experience.

Researchers examined four components of brand vulnerability: frequency of customer frustrations; customer sharing behavior (for example, disclosure of frustrations on social media); the impact of frustrations on customer behavior; and the uniqueness of those frustrations to a particular bank. Responses were collected from 3,662 customers, analyzed, then modeled to yield the rankings.

26% of customers said they are frustrated with their primary bank. cg42 estimates that this puts customer deposits totaling a whopping $627 billion in jeopardy at the top 10 banks, $92 billion of which is projected to exit in the next 12 month, a mild improvement from the 2011 findings when $675 billion was at risk and projected losses were $185 billion. 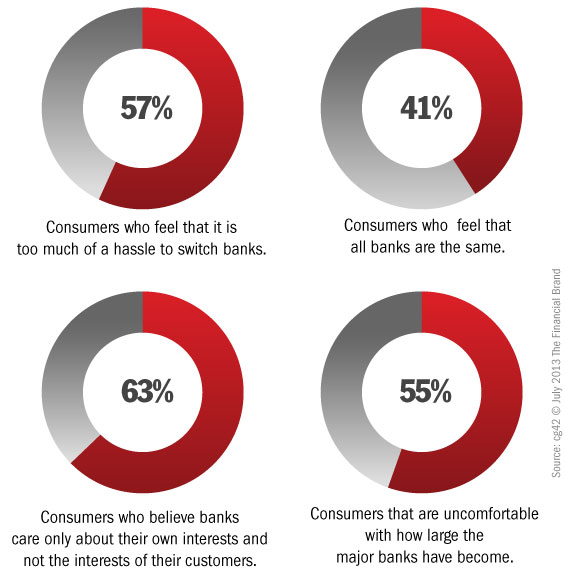 Among the major sources of irritation for customers: broken promises, being nickeled and dimed, and getting hit with unexpected overdraft charges and fees. (Note: In the wake of Reg E, It’s hard to believe anyone could feel their overdraft charges were “unexpected.”)

In the current study, TD Bank has the lowest brand vulnerability score, replacing PNC, which was the least vulnerable bank in 2011.

To get your copy of the “2013 Retail Banking Brand Vulnerability Study” or for more information, visit www.cg42.com.