OnPoint Community Credit Union, based in Portland, Oregon, is looking to honor the area’s top educators with The OnPoint Prize for Excellence in Education.

One Educator of the Year will have their mortgage paid for a full year, plus $5,000 donated to their school for resources and supplies. Three other finalists will each receive $1,500 for themselves and $1,500 for their schools.

The nomination form asks questions about the nominee’s creativity, enthusiasm, teaching methods and overall impact on students. Additionally, the contest calls for at least three letters of recommendation and a portfolio of the teacher’s work and accomplishments in order to complete a nomination. 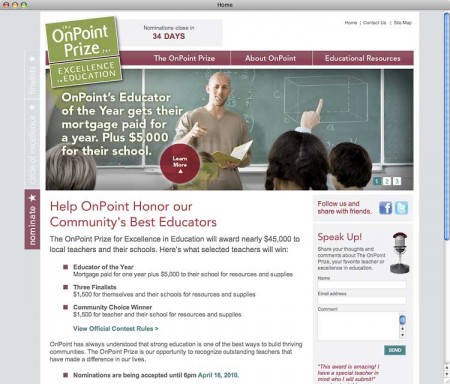 A selection committee with chose a pool of semifinalists — called the Circle of Excellence — on May 17. The public can vote for their favorite teacher at the website in the project’s next phase. This Community Choice Winner will also get $1,500, as will their school.

OnPoint’s cash awards and contributions to schools will total nearly $45,000.

The selection committee will be picking the Educator of the Year and three other prize-winning finalists from the Circle of Excellence. An announcement will be made on June 4.

OnPoint, who changed names from Portland Teachers Credit Union in 2006, has the support and cooperation of local school officials. The school district will help facilitate portions of the contest.

OnPoint’s increased involvement in the educational community is sorely needed in Oregon. The state has been deeply impacted by the recession, and programs for kids and education have been affected more than others. Compounding the problem, WaMu’s once active and avid support for educational programs in Oregon vanished when the thrift failed in 2008.

The credit union has also established a media partnership with a local NBC affiliate, KGW Channel 8. Throughout the campaign, KGW-TV will run a series of promos to support the OnPoint Prize contest. The TV station also has an unusual banner ad for the program on its website.

OnPoint plans to make the Prize for Excellence an annual event.

OnPoint Community Credit Union was founded by teachers over 78 years ago. The credit union’s unique Homeroom Loan enables teachers to get mortgages with no-down-payments and no mortgage insurance. Today the credit union has over $2.7 billion in assets and more than 200,000 members.