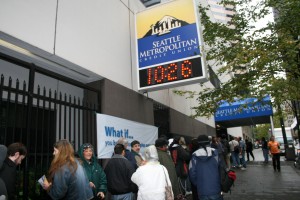 Seattle Metro Credit Union wanted to know what socially-conscious people might do with a little extra money, so it asked them: “If we gave you $10? What would you do for someone else?” For their answers, the credit union gave away $10 to people — free — with the assignment to “pay it forward.”

At this one-day event, participants had to sign a waiver that allowed the credit union to videotape their intentions, which were then posted on YouTube. People then voted for their favorite. The winner wins $1,000 to donate to the cause of their choice.

Over 300 people showed up at the event Vicente said, and they filmed about 110 of them.

Here’s one video, from “David,” who says he’d use his $10 to buy what’s needed for a bake sale, then roll the money over and do it again, so he can give the money to a kid’s program:

The credit union culled down the videos to the top seven videos. These will be posted at the credit union’s 7principles.coop microsite for voting by the general public.

The credit union also wanted to see if folks really followed through with their “pay-it-forward” promises.

“During the event we gave participants a pre-paid postcard, an email address and a phone number,” Vicente said. “That way, they could follow up on their ‘pay-it-forward’ experience, allowing us to post excerpts as part of the voting and announcement of winners.”

Seattle Metropolitan Credit Union was featured in nearly every local media outlet, including KOMO/ABC, King 5/NBC, the Seattle P.I. and more. The story was picked up nationally on CNN, and positive feedback has come from all over the place.

“We’ve had calls from non-members in other cities as far as Bellingham and Spokane telling us they paid $10 forward on their own,” Vicente said.

[UPDATE: Jill Vicente says the credit union yielded over $1.3 million in PR value. She thinks they got more than that, but they had to stop paying the clipping service because it was getting too expensive. Wow.]

Impressive results. Unfortunately, this is all the data SMCU could afford to track.

Why all the attention? The credit union thinks it has everything to do with the novelty of a credit union giving out money at a time when banks are on life support.

A grim economy isn’t the credit union’s motivation. On its blog, the credit union explained the history and timing of the promotion: “We began planning this in July, and only because the logistics of giving away money proved somewhat tricky did we push the event back to October. This didn’t happen because of the economy, but rather in spite of it.”

Key Takeaway: This a great example of how a simple, inexpensive idea can balloon into a huge PR bonanza. How much PR could you generate with $2,820 in cash, a camera crew and a free YouTube account?

Reality Check: “Cheap” and “simple” does not translate to “easy.” In fact, almost the opposite is true. Seattle Metro invested lots of time, energy and manpower into their promotion. Coming up with the idea is only the first step. You’ve got to plan ahead, anticipate all your opportunities and provide adequate marketing and HR support in order to maximize these kinds of PR-style promotions.

Vicente adds this final observation: “One outcome that I didn’t expect was the incredible upsurge in employee morale and brand buy-in. I had one employee come into my office after the event, crying, saying she was so proud to work here.”