Subscribe Now Get The Financial Brand's FREE Email Newsletter
Banks and credit unions that keep consumers happy can expect three out of four to recommend their institution to other prospects. But making people angry, with errors or other poor service, unpopular fees and policies, and credit issues like turndowns can turn potential brand advocates into enemies.

Keeping consumers happy can ensure their loyalty, but how badly does making them unhappy damage that loyalty and, critically, their willingness to recommend their bank or credit union to friends, family and others?

It turns out that dissatisfaction can slash willingness to promote a brand by a sizeable degree — from half to two-thirds.

“Consumer dissatisfaction can slash willingness to promote a financial brand by a sizeable degree — from half to two-thirds.”

Errors and Problems Can Harm Loyalty

In 2018, 8% of consumers reportedly experienced a banking-related problem or error. The chart below illustrates the breakdown of these problems and their impact on loyalty.

Of those who did not experience an issue, 75% were very likely to recommend their institution to others. For those who experienced a problem, their loyalty scores dropped significantly. 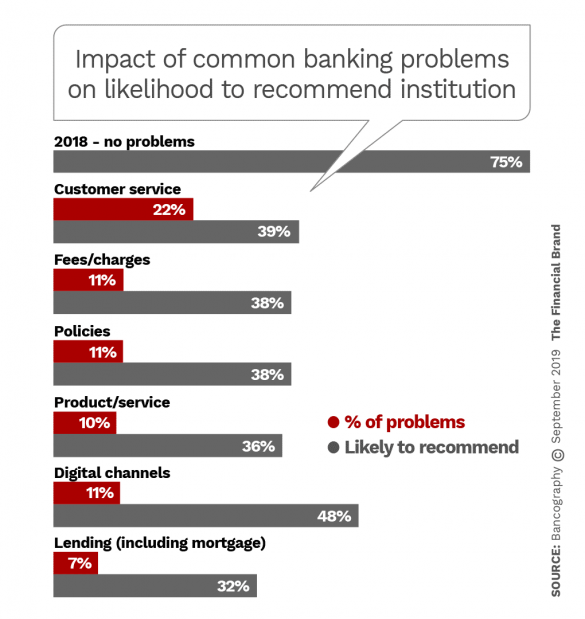 In the chart, the largest of the six groups represents issues relating to basic customer service, such as the staff’s attitude, professionalism, knowledge and efficiency. These types of issues have always plagued branches, and can infuriate consumers to the point of prompting account closure. Institutions must conduct ongoing training to combat these traditional service quality woes.

Management Decisions May Undermine Loyalty Too

While those causes hinge on interpersonal behavior, another set of issues arises when consumers react to the results of decisions made by management. Sometimes the problem comes down to poor communication.

Dissatisfaction related to fees, policies or products comprises a collection of issues related to customers and members not understanding the rules associated with their products.

Too often, the consumers’ complaints read like accusations, i.e., the customers felt blindsided by fees, ripped off or even sold the wrong product.

If this group of customers leaves the institution, they relocate to a peer institution with similar products, features and convenience. The fault usually lies with a deficient new account opening experience.

Another group of issues relates to digital channels such as internet banking, mobile banking and remote deposit capture, as the rise in use of these touchpoints has resulted in heightened problem occurrence.

Such difficulties can be anticipated and prevented. A professionally executed onboarding transaction that educates the user not only on the new products and banking policies, but also the associated electronic services, would prevent confusion, build loyalty and bring referrals.

Two-Thirds of Consumers will Nail You over Credit Matters

Loyalty and referrals may also suffer over lending issues. Comments by consumers who have experienced lending problems primarily fall into two sub-categories: those refused for the loan or those who found the institution’s credit process onerous and challenging.

We asked for verbatim comments to explain the raw numbers here. Respondents cited lack of communication between the loan officer, the applicant and the back office, and the failure to meet expectations at closing. In that these issues will also undermine referral likelihood, it is important for institutions to examine loan origination processes and training to forestall potential customer dissatisfaction.

Financial institutions cannot eliminate errors, but they can train their staff to improve the account opening process and minimize the occurrence of such errors. This will improve consumer loyalty and the likelihood of receiving their favorable referrals.