Many consumers blamed large institutions for the financial collapse of 2009. Movements were born like Bank Transfer Day to encourage consumers to move their business to smaller, more “customer friendly” banks and credit unions.

That’s water under the bridge for many consumers. In Q2 2013, more active bank shoppers on FindABetterBank selecting a national bank indicated that recommendations from a friend or family member influenced their decision, compared to shoppers that selected a smaller institution. 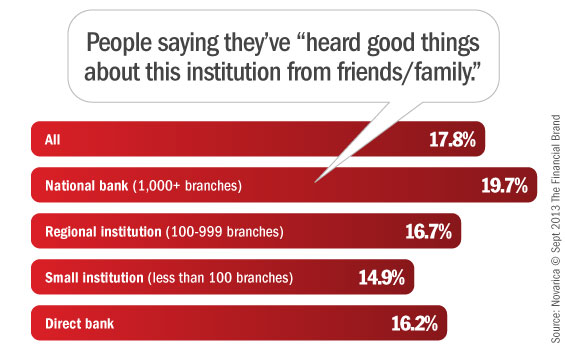 Reality Check: Many consumers are more interested in the convenience provided by national institutions, even if they must pay extra for it — despite whatever flaws, faults and hard-feelings consumers may attribute to banks.

How can small institutions retake the momentum? It’s critical to hyper-focus on convenience features like surcharge-free ATM access, mobile banking and shared branches in the case of credit unions. Forget about toppling the big banks; focus on beating regional institutions — the $10B to $20B asset-sized banks — because they aren’t as agile as smaller institutions and don’t have the technology resources of the larger institutions. Many of these regional players have been slow to roll-out new services like mobile check deposit and don’t offer surcharge-free ATM access.