Subscribe Now Get The Financial Brand's FREE Email Newsletter
Traditional banking institutions still enjoy some benefits of being consumers' financial focal point. But attitudes are changing — especially among Gen Z, which loves 'à la carte finance.' Increasing reliance on mobile offerings and toughening competition from fintechs and challengers like Chime all point to an evolution in how consumers handle their money.

Being someone’s primary financial institution continues to be important and beneficial to a bank or credit union. For all except the largest banks, however, remaining a consumer’s primary provider has already become more difficult and it will likely become even harder.

One reason is that the idea of centralizing much or all of one’s financial business is eroding, as Millennials and Generation Z come to dominate the industry’s consumer base.

Another is that the primary institution status of challenger banks and fintechs, while currently small, is increasing.

In addition, the future of primacy also gets tied up with the outlook for open banking and platformication, especially as Baby Boomers give way to younger people.

While many studies indicate that the rate of switching primary providers is generally low, currently around 6%, according to Novantas, that could change in the wake of COVID-19’s digital wakeup call to consumers.

BAI’s 2020 Banking Outlook study found that the portion of consumers anticipating that they’ll remain with their primary financial institution in 2021 has fallen in every demographic group analyzed, compared to expectations reported in 2019. On a ten-point scale, with the higher the number the more likely a consumer would stick:

And desire for digital access plays a central role now: A key reason that consumers told BAI researchers that they would move was competitors’ promise of better mobile banking apps and better digital capabilities overall. Millennials are most likely (75%) to switch for this reason, followed by Gen Z (66%), Gen X (56%) and Boomers and older (19%).

But this potential for shifting comes on top of a wave that’s already hit.

In a report, Raddon Research found that the status of being a consumer’s primary financial institution has undergone a major shift that began in 2014 and accelerated.

In 2013, 44% of consumers reported that their primary institution was a credit union or a community bank. But in 2020, the situation has more than flipped. Six large banks — Bank of America, Chase, PNC, Truist, U.S. Bank and Wells Fargo — control a total of 59% of primary financial institution status. Credit unions account for only 12% and community banks account for only 12%. 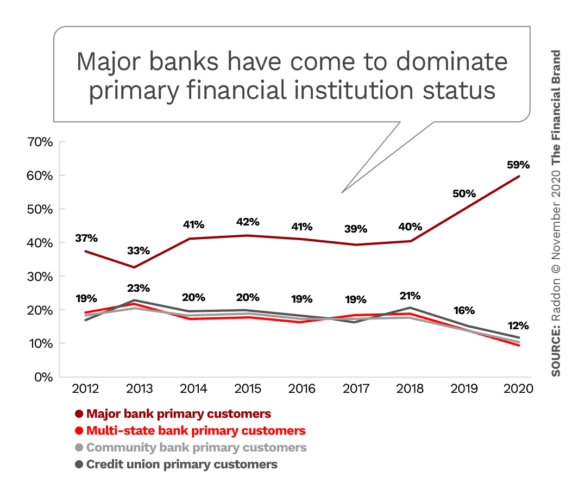 In fact, Raddon reports that its survey found that more people say BofA is their primary provider (20%) than for the entire credit union (12%) or community bank (12%) sectors.

What makes primary provider status so important builds on the classical idea of cross selling to consumers you already serve. If data is the new oil, then PFI status represents exploration rights and information to work from.

Many consumers are traditionally consolidators, preferring to keep their financial affairs in one place when possible, according to Olivia Lui, Principal at Novantas, drawing on the firm’s distribution studies. Not only do they already know the institution, and vice-versa, consumers will often pay slightly higher loan rates and accept slightly lower deposit rates from their primary institution, argues Brandon Larson, EVP at Novantas. While this advantage is not as strong as it once was, given the low rate environment and younger generations’ increased willingness to move, it remains a strong force.

Primary provider status used to be relatively straightforward. In recent decades it hinged on where a consumer maintained their main checking account. In 2015 research Raddon found that 81% of consumers identified checking as the determinant of primary status.

But much has changed since then, and now only 54% of consumers surveyed by Raddon use the checking relationship to identify their primary provider, although it remains the leading standard. The second- and third-ranking points are “Where paycheck or Social Security is direct deposited,” 43%, and “Most frequently used debit card,” 40%. While terminology has changed somewhat — many younger people have never written a check — there’s more to the shift than semantics.

Smaller but significant: Further down the line in Raddon’s ranking, “Most frequently used mobile app,” was picked by 24% — significant in light of the BAI findings mentioned earlier because no one cited it in the 2015 research

Research by Novantas takes a slightly different tack and results in a ranking based more on usage than purpose, as shown in the chart below: 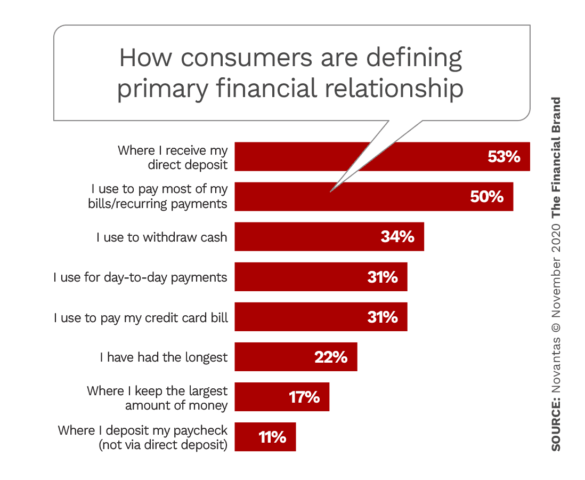 And research by both firms indicates that definition of primary provider differs from one generation to another. Looking at the same data as used in the chart above, but by generation, Novantas found that the leading criterion among Baby Boomers and Millennials was “Where I receive my direct deposit” (64% and 53% respectively), but among Gen Zers it was the institution where they withdraw cash (37%). When Novantas looked at the draws that each generation looked for, the leading one for Gen Z was “Lots of ATMs in my area.”

Access to services, notably in digital forms, plays a major part in choosing a primary institution, with mobile ranking highest among younger consumers.

While branches were the lowest-ranked means of access in the Raddon research, summarized in the chart below, they still remain a significant factor for all generations and to about the same degree. 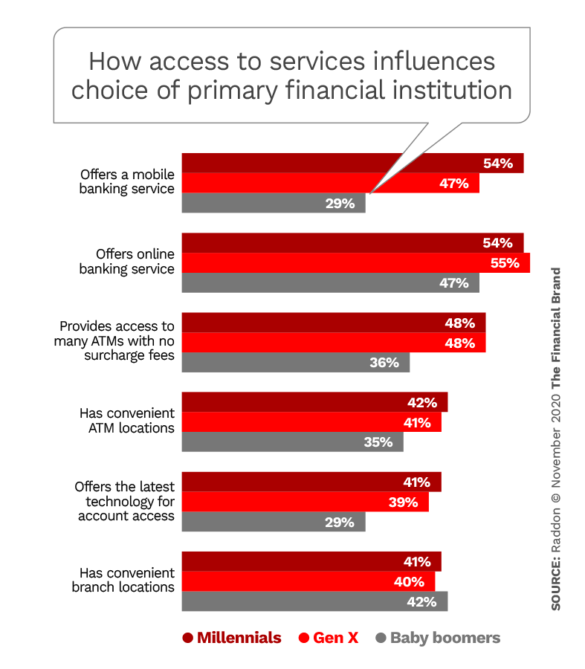 77% of all consumers still use branches at least once a month, according to Raddon. “Consumers still absolutely see a role for branching,” says Andrew Vahrenkamp, Senior Research Analyst and Program Manager at the firm. “We continue to find that people want all of it.”

Researchers have also looked at the factors that consumers use to select their primary financial institution. Interestingly Raddon found little change from 2015 to 2020, with problem-solving the top-ranked quality. 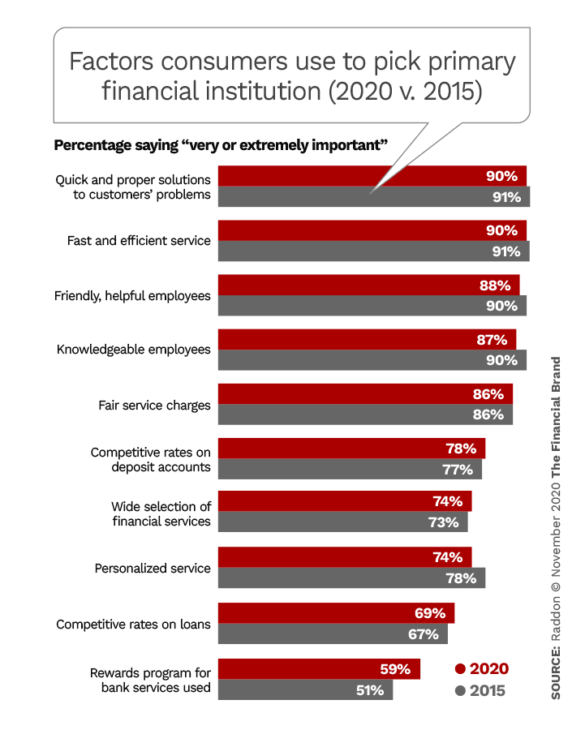 Many of these factors tend to be “human-centric,” in spite of the digital leanings spoken of earlier. This came through in other areas of research too. Raddon found that outreach during the pandemic has had an impact.

Overall, 41% of all households said their primary financial institution reached out during COVID-19. Major banks did so 44% of the time, online banks 41%, multi-state banks 39%, community banks 38%, and credit unions 34%.

“Those touchpoints bring significant value, ” the Raddon report states. But the firm also observes that major banks outdid credit unions, which have historically been praised for member service and connection. This ties into the massive shift in primary status discussed earlier.

Where all the aspects of selecting a primary institution come together is in the customer experience and why different generations will switch institutions, as shown in the chart below. 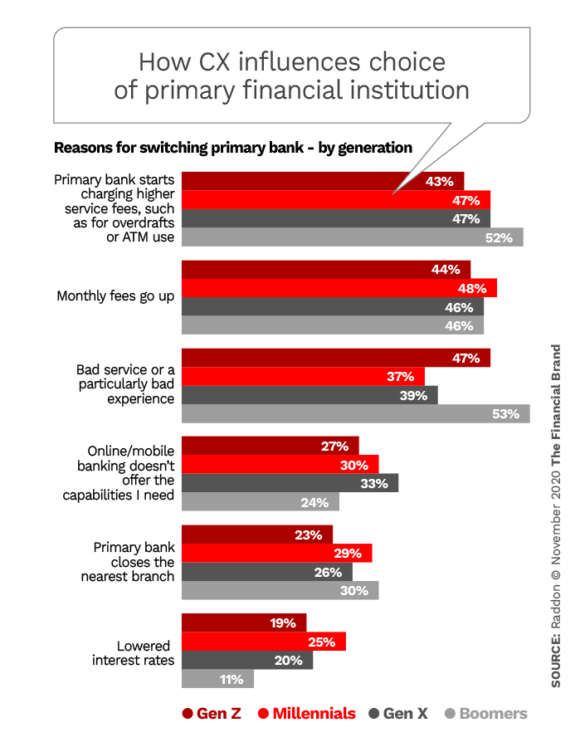 While consolidation of accounts has been the tendency for many people in the past, that idea has less significance among Gen Z. “There’s a notion among Gen Z that they can go to different places for different needs,” says Vahrenkamp. That could simply blow up the concept of primary financial institutions, or it could morph it towards the financial portal that offers a platform made up of financial products and services offered by many providers — like the new Google Pay/Google Plex combination.

Gen Z’s affinity for mobile plays into that, as does the à la carte economy they are growing up with. Who needs cable when you can pick and choose from among your choice of streaming and gaming services?

Novantas’ Olivia Lui points out that many younger consumers focus on payments the most out of various financial services. They use mobile and other payment channels frequently, so that is top of mind when they think of money. The back end of payments, typically the direct deposit, is a “set it and forget it” decision, Lui explains. The front end is where more of the action and visibility has been for younger consumers through P2P and more. Novantas’ Brandon Larson thinks primacy may become a dual affair, with primary savings institution and primary transaction provider becoming two new statuses.

Raddon’s Vahrenkamp suggests that executives making the decisions in banks and credit unions — especially if they are Boomers — must be able to step outside of their own preferences and habits to see how younger generations’ concept of primacy and loyalty differ from their own. The next stage is already here.

Chime and Its Ilk Are Coming Up Fast

Traditional financial institutions have a curious mixed mindset when it comes to fintechs, challenger banks and neobanks. They find them interesting to read about, and some make a good business selling them banking as a service. But, as Cornerstone Advisors’ Ron Shevlin notes in a blog, his firm’s research indicates only one out of five banking executives consider digital banks like Chime, Aspiration, Dave and others to be a significant competitive threat.

“The surprising shift in primacy towards the megabanks could see a replay among the newcomers if banks and credit unions don’t pay close attention.”

Cornerstone’s research indicates that as of mid-2020 6% of American adults with a checking account consider a digital bank, broadly defined, to be their primary financial institution. He says that Chime has 35% of all digital bank checking accounts, followed by Ally at 9% and Varo at 6%. (Vahrenkamp says Raddon’s study asked about all primary providers, but received few responses specifically citing fintechs and challengers. He says that while a growing number of people use such accounts, many don’t yet consider them their primary relationship.)

Shevlin and the experts at Novantas and Raddon advise against any complacency on the part of traditional institutions. Some fintechs’ game plans clearly aim solely as harvesting interchange fees from basic transaction services in a fintech shell. But players like Chime have added features designed to appeal to a broader group of consumers, Shevlin points out — he calls the company digital banking’s “800-Pound Gorilla” — including the ability to obtain early access to direct-deposited paychecks. Varo now has a bank charter, and other players are getting in that line.

The surprising shift in primacy towards the megabanks discussed earlier could see a replay among the newcomers if banks and credit unions don’t pay close attention. Shevlin says that Chime is already among the top ten banks in the U.S. if measured by the number of consumers that consider Chime their primary financial institution.

Novantas’ Lui suggests this is the time for traditional institutions to take a close look at the perks and rewards that consumers get with their accounts. The “good, better, best” hierarchy of options and competitive conditions many institutions offer may need upgrading.

Vahrenkamp says mobile banking has clearly become a key focus. While features are important, making sure the institution’s offering is easy and clear to use is more critical. That’s part of the appeal of newcomers like Chime.