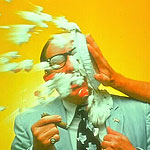 Every October, Oregon Community Credit Union reaches out to its employees to remind them of the importance of investing in their community. This year, the credit union partnered with United Way of Lane County, and more than half the staff made a donation.

Exceeding participation goals, 52% of Oregon Community’s employees contributed to the campaign, donating a total of $38,260 — a 38.14% increase from the previous year. The credit union also agreed to make a $50 donation for each employee who participates, bringing the grand total to $44,960.

For making a donation, Oregon Community employees were entered into a drawing for various prizes. Along with the usual incentives, participants were chosen for a “Pie in the Face Contest.” The contest winners were allowed to throw a pie in the faces of two credit union executives. Six members of the senior team voluntarily competed to take a pie in the face. Ethan Nelson, Director of Credit Administration, and Rosie Pryor, Chief Marketing & Strategy Officer, received the most nominations from employees.

“What a great way to give my coworkers some fun while they do good,” said Pryor. “I can’t think of a better reason than United Way for taking a pie in the face. We exceeded our goals and that made it all worthwhile.”