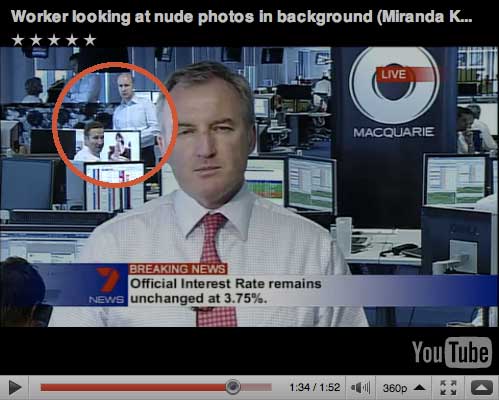 It started like any other typical Tuesday afternoon interview, as Macquarie Private Wealth expert Martin Lakos discussed the Australian central bank’s latest interest rate decision with the Seven Network. But unknown to Lakos, a colleague, Macquarie broker David Kiely, can be seen over his shoulder in the background ogling pictures of Australian supermodel Miranda Kerr.

The images of Kerr, who models for Victoria’s Secret, were from a recent GQ magazine photo-shoot, including semi-nude and topless pictures.

By Saturday, a YouTube video of the live interview had been viewed over 3 million times and rated “five stars” by 3,750+ people.

“Macquarie and the employee apologize for any offense that may have been caused,” the bank said in a statement.

Some people quickly stepped up in support of Macquarie’s decision, saying Kiely had “suffered enough and finally, there’s just too much political correctness in this world anyway.” Even Ms. Kerr came out in support of her fan, urging Macquarie to be lenient and let Kiely keep his job.

That same week, HSBC ran a cheeky ad in the Sydney Morning Herald (see below) with a snapshot of the Macquarie interview along with the headline, “We spend more time looking at your assets.” Get it? Assets…?

“He will remain an employee of Macquarie,” the statement said. 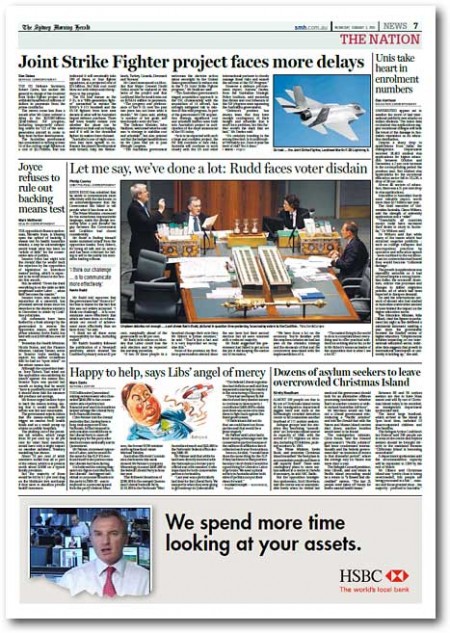