The 2012 World Retail Banking Report survey from Capgemini and Efma found that 65% of banking consumers say they are satisfied, but only 51% say they have no plans to switch.

The survey included more than 18,000 customers in 35 countries across six geographic regions, making it one of the most detailed studies of its kind. Online surveys polled samples of at least 500 retail-banking customers in every country covered.

Satisfaction levels have little impact on loyalty. Despite overall high satisfaction, 40% of customers are not sure they will stay with their primary bank, and 9% are likely to change in the next six months.

Only 51% of customers are confident they will remain with their primary bank over the next six months. 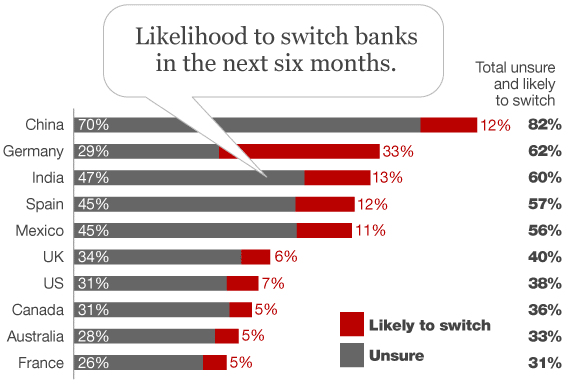 Despite low levels of trust and loyalty, customer satisfaction with banks remains high in most regions.

Globally, more than half of customers (53%) said they would leave their bank because of poor service.

The ability to carry out day-to-day banking conveniently and efficiently is more important to customers than having specialized services. 49% of customers said they would switch to find an easier banking experience.

The second and third reasons customers said they would leave their bank are price-related: fees, cited by 50% of customers, and interest rates, cited by 49%.

Factors that are less important to the switching decision include reward and loyalty programs at 28%, and a bank’s brand image or reputation, at 29%. Relatively low on the list was a desire for personal relationships, cited by 34% of customers. 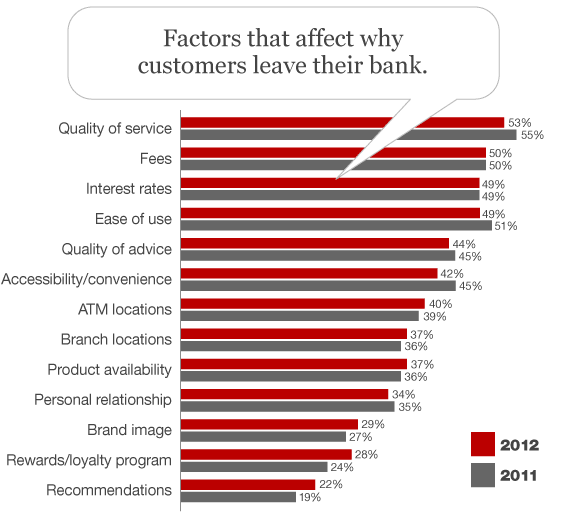 Twice as many customers around the globe (31%) say they have little or no trust in the banking system, compared to the 15.3% who say they do.

Banks in North America experienced a 7% increase in trust and confidence levels compared to 2011, while those in Western Europe experienced an increase of 3%.

Channel performance is central to the customer experience. The branch and the internet remained the most important channels, with roughly 70% to 90% of customers in all regions citing them as so. Yet banks were not effective in delivering an experience to match the level of importance customers placed on those channels. The percent of customers reporting a positive experience through these channels ranged between only about 40% and 60%

Given the importance of the branch and internet, banks could benefit by improving the customer experience through these channels. In terms of branch banking, customers are most interested in having a knowledgeable staff (67%) and low waiting times (65%). Not as important is personalized branch service (61%) and the ability to open an account in less than 30 minutes (58%).

In terms of internet banking, customers are looking for more complete services. They most highly value the ability to carry out all types of transactions (70%), as well as have a holistic view of account information (68%). They also want to be able to find answers to all their queries (64%). Less important is having personalized service (58%).

In ATM banking, basic account management emerged as the most important attribute. Nearly 47% of customers cited as important the ability to manage their accounts by being able to make payments and transfers. The ability to scan and deposit checks through the ATM is valuable for 44% of customers, and finding answers to all banking questions is important for 42% of customers. Less important is having a customized interface (39%). 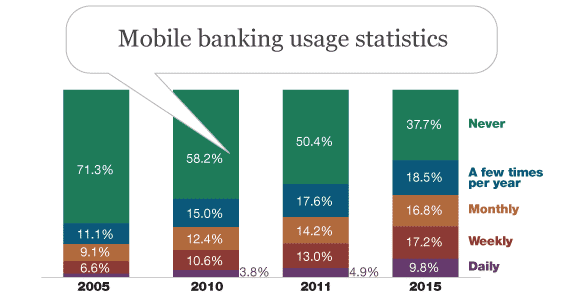 The growing importance of the mobile channel is undeniable. By 2015, 43% of consumers will be using mobile banking tools every month — 10% will be daily users.

The mobile channel had the highest increases in positive customer experience in most regions, but the branch and internet remain the two most important channels.