Subscribe Now Get The Financial Brand's FREE Email Newsletter
A coalition of bank and nonbank participants are leading a new fund established by the FDIC. They've already lined up $120 million to boost capital at minority financial institutions and CDFIs to enable them to increase lending to communities hit hard by the pandemic.

The Federal Deposit Insurance Corporation will launch a new investment fund — the “Mission-Driven Bank Fund” — to pump capital into a group of financial institutions providing banking services to minority, lower income and rural communities across the country.

“One of the things that I heard in the beginning of Covid-19 — and in particular for Black banks — was a lack of capital,” FDIC chair Jelena McWilliams said during an interview with CNBC. “Finding good capital to come to the banks was the No. 1 thing.”

The fund has three participants so far. Microsoft and Truist Financial — both of which have already invested time and funding on separate projects to bolster underserved communities — are considered “anchor investors.” Discovery Inc. is participating as a “founding investor.” So far, the fund has raised an initial investment totaling $120 million, according to the FDIC.

The agency says the new capital fund is designed specifically to support insured Minority Depository Institutions (MDIs) and Community Development Financial Institutions (CDFIs), both of which are what the FDIC considers “mission-driven” banks. Both categories of institutions commit a large portion of their lending to minority and lower-income communities.

There are about 280 FDIC-insured MDIs and CDFIs in the United States with a cumulative branch network stretching into 29 states, according to the FDIC. 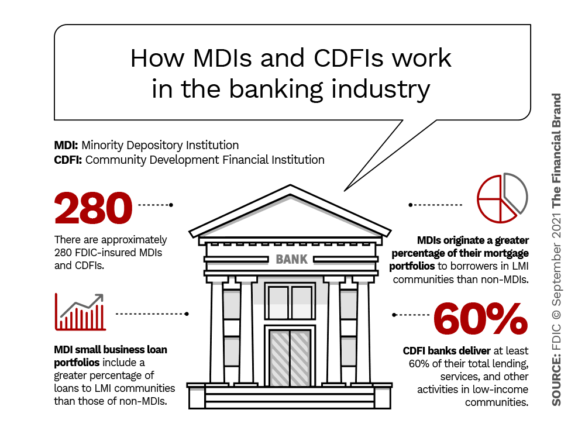 The FDIC plans for initial investment pitches to start rolling in from these institutions starting in the first quarter of 2022. The two anchor investors are in the process of hiring a fund manager and establishing the ground rules for investment pitches. Although the FDIC is inaugurating the fund, the regulator says its role will be strictly advisory. It will “not contribute capital to, manage, or be involved in investment decisions of, the fund.”

The participants in the Mission Drive Bank Fund are not the only players advocating for minority-focused banks and businesses. Bank of America, for instance, led an April 2021 conference made up of 200 and more companies and 27 minority-run financial institutions to coordinate connections between the two groups. Months later, Walmart and Verizon were just two of many to step forward and tap minority-owned banks to underwrite their green bonds.

Likewise, Wells Fargo announced in May 2021 that it finalized capital investments in 13 MDIs as part of its pledge to invest $50 million. The bank said in a press release that these investments, made in conjunction with the National Bankers Association and Sullivan & Cromwell, are designed to help Black-owned banks maintain their MDI status.

How the FDIC Program Got Started

Oddly enough, brainstorming for the fund didn’t stem from talks in a board room. Instead, the inspiration came from something much simpler. McWilliams says she got the idea flipping through TV channels, when she ended up watching the investing show “Shark Tank.”

McWilliams — who was nominated by President Donald Trump to lead the FDIC, and confirmed in May 2018 — said she watched people pitch their passion projects to the “sharks,” and asked herself, “Why don’t we have a ‘Shark Tank’-like fund for minority depository institutions?” CNBC reports.

McWilliams then “pitched” the idea to FDIC chief of staff Brandon Milhorn shortly after, who, she said, exclaimed “Oh dear Lord! How are we going to do that?”

To help get it set up properly, the FDIC consulted with approximately 70 CEOs of MDIs and CDFIs, in addition to trade groups, potential investors and others. McWilliams says the conversations were driven by questions about which tools financial institutions need to drive cash into local communities of color.

“This fund is supposed to leverage the investments from others under the brand of the FDIC,” McWilliams explains, “and then allow every dollar to be multiplied exponentially for the benefit of homeowners and small businesses and credit in the communities where it is needed the most.”

One of the banks eligible for funds is Carver Federal Savings Bank — established in 1948 — which is both MDI- and CDFI-certified. The bank’s CEO Michael Pugh says if banks supporting minority businesses can’t afford to make loans, it can have disastrous consequences.

For example, in the wake of the initial onslaught of Covid-19 restrictions and the aftershocks, he explains that over four in ten of Black-owned businesses nationally were forced to shutter their doors.

“Many of those businesses went under because, frankly, they just did not have the access to capital to survive a catastrophic situation,” Pugh maintains.

Why Microsoft and Truist?

This isn’t the first time either Microsoft or Truist have invested in helping underserved communities. In mid-August Microsoft announced it would be teaming up with HSBC to back non-profit program Feeding America in the shape of a $350,000 grant from HSBC, with grant support and online content provided by Microsoft.

On the other hand, Truist Financial’s CEO William H. Rogers Jr. explains investing in the FDIC fund is part of the bank’s trajectory, adding partnership in the new fund “is a direct investment in advancing our purpose to inspire and build better lives and communities.”

Back in September of 2020, the bank channeled $40 million into establishing a nonprofit, called CornerSquare Community Capital, which supports selected CDFIs through the purchase of 25% loan participations.

Truist in a release states that 100% of the funding of the CornerSquare program will be allocated to “racially and ethnically diverse small business owners, women and individuals in low- and moderate-income communities, with a focus on African American-owned small businesses.”