Vince Wilfork is known — not just in Boston, but around the NFL — for two things: for his size (even though he’s 6’2” and 325 lbs, he can still run the 40 almost twice as fast as you), and for the fear he instills in offenses around the league. He is unquestionably one of the best defensive players in the game today.

In a nutshell, Wilfork is NFL royalty. So for Eastern Bank, getting the big #75 to participate in a promotion is a bit of a marketing coup.

Here’s how Eastern Bank’s holiday campaign works. People can bring items they wish to donate to Toys For Tots down to any one of Eastern’s 94 branches. Anyone who takes a photo of their donation and sends it to Vince Wilfork on Twitter (@#wilfork75) using the hash tag #easterntoys will have their photo retweeted by the football superstar.

The promotion kicked off with a full advertising push November 15, just six days after Eastern launched the bank’s first Twitter account. The launch campaign included TV, radio, online, social media and traditional offline marketing components. The promo runs through December 17. This is the first time Eastern has held a Toys For Tots drive.

Midway through the promotion, so many toys have been donated, Eastern Bank has a hard time quantifying it.

“Let’s just say we have branch managers calling almost daily saying they need more boxes for toy donations,” explains Andy Ravens, Eastern’s PR and social media guy. “We can’t pick up the full donation boxes and get new ones to them fast enough.”

“We have a warehouse with palette after palette of toys,” Ravens adds.

Wilfork hasn’t retweeted that many donation photos — maybe a couple dozen total — but generating a bunch of Twitter activity wasn’t the point of Eastern Bank’s strategy.

Banks support charities all the time… so what? Banks even have holiday toy drives… what’s new? There isn’t much to the standard, familiar story that will interest editors.

“But add Twitter and the NFL celebrity, and you can turn it into a real story,” Ravens explains.

The strategy worked. Eastern Bank had stories run in the Boston Globe, the Boston Herald, the Boston Business Journal, and on multiple TV and radio stations, including this great one-minute bit on WCBV.

Ravens says it took the combination of both Wilfork and Twitter to give the Toys For Tots story its real PR juice — just one or the other might not have been enough.

He’s probably right. There’s a story in giving common folks the opportunity to have their tweets shared by someone famous, particularly one like Wilfork who has over 126,000 followers on Twitter.

“People love it when celebrities retweet them,” says Ravens about the psychology underpinning the promotion.

Toys. Needy kids. Big scary NFL superstar. Twitter… and a bank! It’s a story with a lot of angles. It gives an editor plenty to work with.

Key Takeaway: Financial marketers are unduly obsessed with growing Twitter followers and Facebook fans. It helps to remember that social media can be indirectly used to milk otherwise ordinary promotions for more value (like using Facebook for charity grants). Instead of tormenting yourself as you try to build your social media following, you might yield more from social channels if you use them as bait in your PR stories. Adding social media components to your promotions will help you generate more press, because the media is enraptured with any and all things involving Facebook and Twitter in corporate America — especially when it involves a financial institution. Combine the strategy with a dash of celebrity status and you’ll yield the biggest PR impact.

By all accounts, Wilfork — for as intimidating as he can be on the field — is a real teddy bear in person. Mr. Ravens at Eastern describes the Patriots star defensive player as “very kind, very affable, with a big heart,” and says he is active in a number of philanthropic ventures. 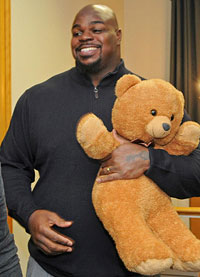 Was it hard for Eastern, a bank with $8 billion in assets and 450,000 customers, to convince Wilfork to use his Twitter account for corporate charity?

No, say Ravens. Eastern has worked with former NFL quarterback Doug Flutie for over 12 years on other philanthropic campaigns. Flutie and Wilfork have the same agent, so all it took was a couple phone calls.

But Ravens says financial institutions of all sizes can pull off a celebrity endorsements, and the process isn’t as complex or implausible as you might think. Ravens gets approached by a number of celebrity agents looking for endorsement deals for their clients. And when Eastern wanted to partner with baseball slugger Adrian Gonzalez, it was Ravens who picked up the phone and cold-called the agent.

“Just don’t be afraid to think big and be persistent,” Ravens advises. “You never know what you may be able to pull off.”