A new series of television commercials from Denver Community Credit Union admit two tiers of truths — the good reason and the real reason — as to why people should join. The ads deliver blunt messages coupled with kinetic typography and a brash Gen-Y voiceover. The end result is a fresh, clever series of spots that pack a relevant message into an energetic execution appropriately suited to today’s fast-paced world.

“Okay, look,” starts one of the spots. “We at Denver Community Credit Union don’t want you to get e-Statements because they save trees or time. That’s why you want to get e-Statements. We want you to get them because they save us money on postage and paper.” The spot goes on to explain that Denver CCU is owned by its members who profit from the savings.

“We ran them on a huge, inflatable movie screen at a big event we put on called ‘Movies in the Park’ and people actually applauded,” Blue said. “It was the only time I’ve ever seen a group of people applaud a commercial.”

It took two tries before the credit union found the right creative execution. The first stab resulted in what Blue described as “cartoonish and ‘Sesame Street’ like.” But the credit union started anew with a fresh video producer who ultimately delivered the finished ads seen here.

( Editorial Note: All three of the videos originally inserted here are no longer available on YouTube. )

Many credit unions fall into the trap of building ads solely around “the credit union difference” (not-for-profit, member owned, etc.). Not Denver CCU. Their ads lead with an immediate, tangible member benefit — something relevant and compelling (aka “the real reason”) — then back up the promise with a logical argument about credit union member-ownership (aka “the good reason”). It’s savvy advertising psychology.

Blue said back in 2008, folks around the credit union were stewing over big bank bailouts, so they harnessed their frustrations and turned feelings into ad copy.

“Most of the material came straight from rants we had in our own department about how much it sucked to sugar-coat things when all we had to do was just be blunt and honest,” Blue explained. 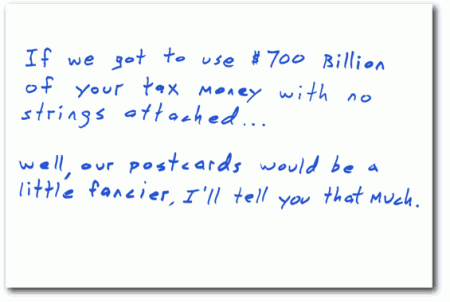 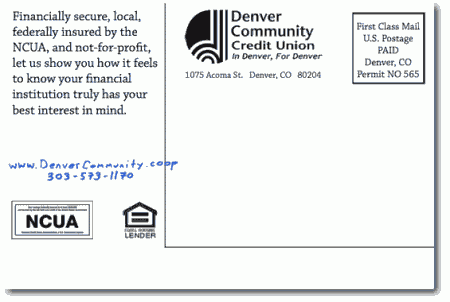 This postcard grew from intra-office rants around the Denver CCU headquarters. The copy reads, “If we got to use $700 billion of your tax money with no strings attached…well, our postcards would be a little fancier, I’ll tell you that much.” Great stuff.

“We got such good response [to the postcard] and had so much fun writing that we started creating TV scripts,” Blue said.

The wildly creative personality behind the production

Denver CCU recruited Jeff Smith-Luedke to do the narration. But this guy is more than just a voice. He’s also a kinetic typographer extraordinaire — a true master of digital video wizardry, and the man who put the pizzazz into Denver CCU’s sassy spots.

If you watch one of Denver CCU’s spots on YouTube, one of the related videos that will pop up comes from Smith-Luedke. Sporting a large nose ring, a cheek piercing and earlobes that have been pierced and stretched, the 27-year old riffs about banks, credit unions and the economy.

His unapologetic use of profanity might not appeal to everyone, but Smith-Luedke has accrued some 18,818 YouTube followers. His f-banks-and-the-economy rant has been viewed some 7,860 times, making Smith-Luedke’s video about credit unions one of the most-watched ever on YouTube.

Blue said Denver CCU wasn’t aware of Smith-Luedke’s internet notoriety. “We had no idea whatsoever that he had achieved some degree of fame for his rants when we hired him,” Blue explained. “We had only seen his work in kinetic typography. We got a lot of extra exposure because the people who follow him all watched it and resent it out.”

He’s certainly one of the more interesting, colorful and unusual philosophers you’ll ever run across (online or otherwise) and not someone you’ll likely soon forget.

“He was fun to work with, that’s for sure!” Blue said.

Where to go from here

Blue said Denver CCU intends to sustain the success it’s enjoying with its new found brand platform. “We are considering a contest to see who can write the best rant about why normally intelligent people would choose another financial institution,” he said. Such a promo would certainly help fuel an energy-filled crowdsourcing campaign, with excellent opportunities for online, video and radio.

“We are also currently working on a follow-up series for loan growth specifically,” Blue said. “But we don’t have the supporting materials yet only because we don’t know where and how these will be run on other media.”

“I’ve had enough requests from other credit unions and leagues that we have begun offering them for a very small fee,” Blue said. The cost? A very reasonable $750, which mostly covers tailoring the ads with a new logo and voiceover.

Blue said he’s also pitched one of the big national credit union trade organizations about taking the campaign national. No response yet though.