Most organizations struggle to define who they are, what they stand for and what they do differently. Not to worry. Here’s an easy way to get started.

Make a list of all the things you aren’t. What don’t you want to be? Who aren’t you targeting? What aren’t you selling? What do you not want to do?

When you hear someone on your management team declare authoritatively, “We aren’t _______ ,” or when one of your employees responds with, “But that’s just not who we are,” make a note of it and keep track. Update your list. If you keep going, you’ll be on your way to writing a Brand Manifesto.

What the Dodge Charger Isn’t

Here’s a blunt-but-beautiful example of how this branding technique works, courtesy of Dodge Charger. This 30-second commercial for the reinvented Dodge Charger speaks volumes without ever saying mentioning anything about the product at all:

The message is clear. You don’t need to know about the Charger’s 370-horsepower Hemi V8 engine with variable cam timing to know the Charger is a “man car.” 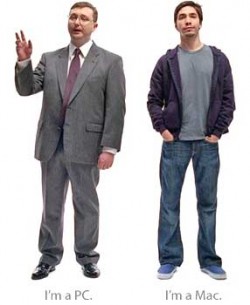 But with its latest ad campaign, Apple has decided to amplify those perceptions by illustrating the stark contrasts between what the company is- and isn’t, what it does- and doesn’t stand for.

Are you dull and boring? Or funny and friendly?

Complicated? Or simple and straightforward?

Convoluted, tedious and bureaucratic? Or intuitive?

Would you rather be ugly and unattractive? Or stylishly gorgeous?

Branding is all about focus — a focused promise, focused audience, focused messages, etc. It can be easier finding your brand’s focus when you dismiss things outside your field of vision. That’s why defining what you aren’t can be as valuable as defining who you are. These cultural absolutes are powerful insights that can create real clarity for your brand. (Tip: For everything you say you aren’t, you should be able to create a contrasting statement that defines what you are.)

Reality Check: You’re only going to get so far by defining what you aren’t, what you oppose and what you don’t like.