Subscribe Now Get The Financial Brand's FREE Email Newsletter
A study on consumer confidence in the financial industry reports that 9% fewer Americans trust their banks than did six months ago.
Subscribe Now!

The latest Chicago Booth/Kellogg School Financial Trust Index finds that trust in national banks fell to 23% in June 2012, down from 25% one quarter prior. Meanwhile, trust in community banks increased to 55% from 51%, and trust in credit unions also increased, rising to 63% from 58%. 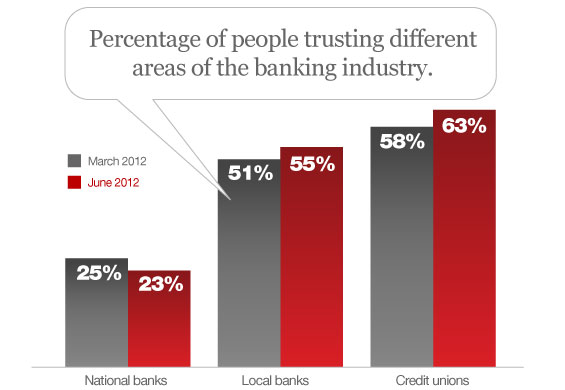 As a broad category, banks overall faired poorly in the study, but that’s only when you combine all institutions together — both local and large banks.

“Trust in banks has collapsed,” said Paola Sapienza, co-author of the report. “Since last quarter’s issue of the Financial Trust Index, trust in banks collectively has fallen five percentage points to a low of 27%.”

More generally, only 21% of Americans said they now trust the overall financial system, the lowest point on record since March 2009. The decrease in consumers’ overall confidence in the financial sector was largely driven by a drop in trust of national banks.

“This suggests that the national banks may be ‘too big to trust,’ whereas there is still a relatively high level of trust in banks at the community level,” said Luigi Zingales, who also helped pen the Financial Trust Index. 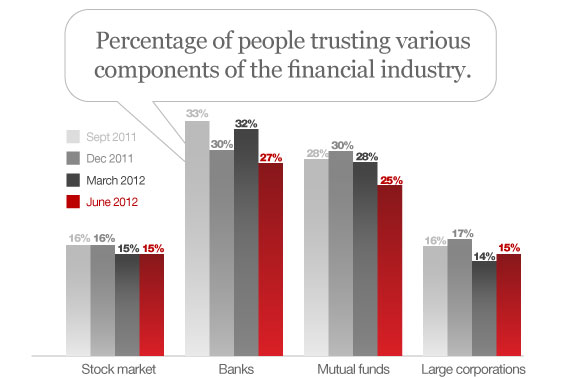 The study also found that anger over the current state of the financial industry is up dramatically in the past couple years. People reporting to be “angry” or “very angry” rose from 50% in 2009 to 62% in the most recent survey.

Fears about a stock market collapse also dropped slightly, with 47% of those surveyed saying a market drop of more than 30% in the next year is likely. Still, that’s nearly one in two people believing the market will crash within 12 months. Nevertheless, about 80% said they planned to leave their investments in stocks unchanged.

On the employment front, only 15% of respondents fear losing their jobs sometime in the next year, which is significantly lower than figures reported in the earliest months of the financial crisis. This number is down from 23% in December 2008, and an all-time high of 26% in March 2010.

The Financial Trust Index measures public opinion over three-month periods to track changes in attitudes. The report has now been updated for 15 consecutive quarters. The most recent data is based on live interviews (not IVR) with 1,029 participants conducted in June 2012.

Trust is a major issue for financial consumers right now. Even though we managed to avoid an economic Armageddon, people are still very uneasy about financial institutions. As long as the industry’s largest players continue to give the press trust-busting fodder (like LIBOR rigging and loan discrimination lawsuits), big banks will remain under the media microscope.

Community banks and credit unions should exploit the unusually high levels of distrust people feel towards megabanks. For smaller institutions, the trust issue can become a key point of attack in their marketing strategy.

For megabanks, there is still the opportunity for (at least) one to step forward with a bold, credible, consumer-centric strategy. But with so much pressure on the bottom line, it will be difficult for any large institution to increase both consumer trust and income.