Subscribe Now Get The Financial Brand's FREE Email Newsletter
There are three periods in banking when conflict is most likely, three root causes of conflict, and one great reason to resolve it: if you don’t, the situation will just get worse. Whether the friction is between departments, teams or individuals, these insights can help bank and credit union leaders better understand the dynamics of the workplace conflict — which is the key to resolving it. Brace yourself, because there is a lot more conflict ahead in a banking industry undergoing seismic changes.

By Jennifer Robison, Executive Editor at The Financial Brand

Healthy conflict can spark new insights and creative solutions. But unless the managers at your financial institution have the skill to deal constructively with opposing viewpoints — whether between departments, teams or individuals — negative outcomes are more likely.

You can ignore disagreement, but that can make the situation worse, says Joe Sullivan, chief executive of the consulting firm Market Insights, which specializes in data-driven strategies for banks and credit unions.

“It’s human nature to have conflict and human nature to avoid it,” Sullivan says. “But if we sweep it under the rug, the issue doesn’t go away. It’s still there, and then resentment starts to build.”

Workplace conflict is becoming more common across all industries. Those who report dealing with conflict in their jobs often, very often, or all the time, increased to 35% in an August 2022 study from The Myers-Briggs Company, compared with 29% in its previous study on the subject in 2009.

That’s why Sullivan strongly recommends that managers at all levels get training in how to resolve employee conflict.

“The world is entirely different post-Covid,” and workplace conflict has increased, he says. “So bankers are going to be well-served to take a new look at conflict and teach people the skills of conflict resolution.”

One of those skills is being attuned to when conflict is likely to arise.

When Is Conflict at Work Most Likely to Happen?

These transitionary periods task people with seeing, accepting, and working toward a future different from their present. Your people may envision different futures for the bank or credit union, or lobby for different paths to the same future.

The nature and frequency of conflict will depend on your organization’s culture, Sullivan says. Some banks and credit unions are more collegial than others, some are more confrontational. That culture will inform the way conflict presents itself — ranging from frosty exchanges to verbal altercations or worse.

Personalities have an effect on conflict as well, too.

“You know, ego gets in everybody’s way,” Sullivan says. “Not always in a bad way. Ego is a vision for how we think things should be.” 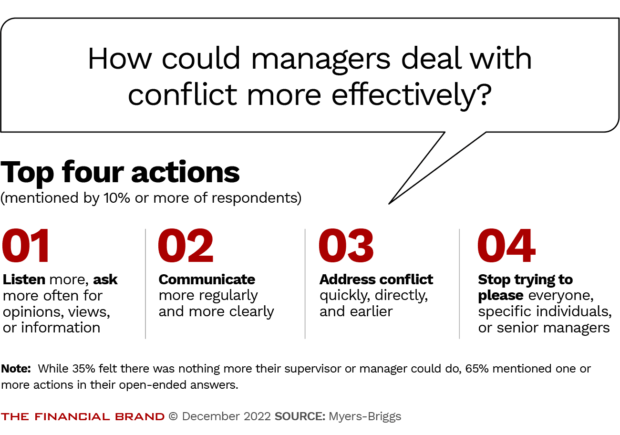 Such visions are motivating, and a bank or credit union’s success depends on the motivation of its employees. Still, even well-intentioned people can get locked in battles that waste time and fry patience.

And work relationships can degrade quickly. Employees feel uncomfortable. Or hostile. Or quit.

But it helps to remember that all conflicts are educational. Indeed, that view is essential to resolving the issue.

“As a leader, you’ve got to look at this conflict as an opportunity to learn and understand another person’s point of view,” Sullivan says. “You can understand a worker better, or maybe even understand the culture of your bank better.” That mindset will soften your response.

As a first step in resolving conflict, identify the cause — you can’t hope to solve the problem until you know what caused it, Sullivan says — and the best place to look starts with the letter “I.”

Times of flux create an environment that thrust differing visions of the future into competition. That competition, according to Sullivan, can usually be traced back to one of three things: information, incompatible interests, or ideals.

“If you can boil it down to the three I’s of information, interests, and ideals,” he says, “chances are you’re going to identify where the conflict is within your organization.”

Take, for instance, a decision about tech investment. A marketing team’s customer analysis will be different from that of a retail team, but both analyses will be solid sources of information — even if they suggest different levels of investment in a particular technology or initiative.

Meanwhile, a single source of information, like Census results, can also spark differences of opinion. Banking execs may agree that some geographies are growing faster than others but disagree about whether they should build more branches in a high-growth area.

More Than a Minor Distraction:

On average, survey respondents spent 4.34 hours per week dealing with conflict at work. This is a significant cost for not only organizations in lost time, but individuals too, in terms of lower job satisfaction and emotional impact, the Myers-Briggs study said.

Incompatible interests or needs. At the core, these conflicts are an issue of resources. “It’s always about either money, personnel, or time,” Sullivan says.

Because resources are always limited, prioritizing one area will almost necessarily deprive another of resources — saying “yes” to one part of the financial institution means saying “no” to another. That “no” will disappoint a team or an individual, impacting their work and possibly livelihood.

Sullivan says a common example is the reallocation of budget away from labor to fund digital transformation, which impacts HR, retail operations, and many other roles. In any case, being deprived of resources for the benefit of another leader or team — even when the resources will do more good elsewhere — is a recipe for conflict.

Ideals. Differing values, belief systems or intentions can cause clashes in ideals: what one person holds dear, another considers dispensable. Sullivan says this can be as damaging to a financial institution as conflicts over information or incompatible needs but can have a particularly corrosive effect on relationships because ideals are intrinsic to our sense of self and “the kind of world you want to live in,” as Sullivan put it.

Consider the technology leader who proposes sacrificing headcount in favor of investing in a new capability. The chief operating officer may agree that it would have meaningful financial benefits, but if she cares about employees as people and prioritizes retention, she may bristle when a colleague proposes layoffs and oppose the idea.

The type of financial institution — bank or credit union — has no bearing on whether conflicts over ideals are more likely or less likely, according to Sullivan. “We all show up in a certain way. We all have incompatible belief systems,” he says. “And that’s true in any organization.”

Who Should Resolve Workplace Conflict?

This is why it’s important to view conflict as a learning opportunity, Sullivan says. And when you understand which of the three “I’s” caused the dispute, you have a better chance to resolve it.

However, you may not be the right person to sort things out. “These things usually involve peers — you don’t often see people fighting with their boss — so I think you’ll be better off when those two branch managers or those two people in the marketing department have a discussion and get through it,” Sullivan says. 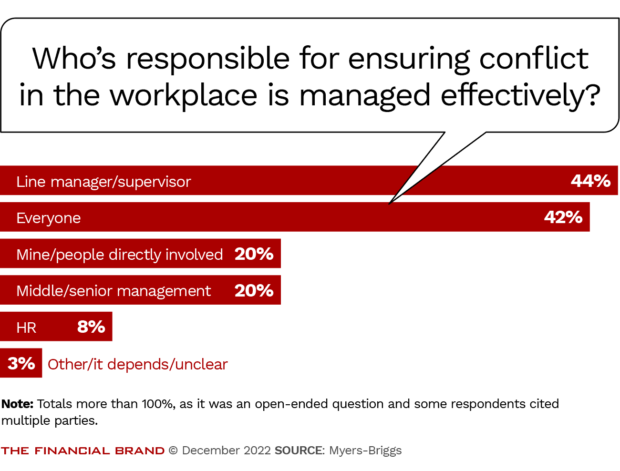 Nonetheless, the probability and intensity of conflict increases as people move up in the hierarchy — greater responsibility puts greater weight on decisions for the financial institution and the individual, he says. So when there’s a lot at stake and a resolution isn’t forthcoming, you may want to appoint a neutral third party from another division or even an outside mediator to facilitate the discussion.

In any case, Sullivan predicts that the banking industry will see an increase in employee conflict. Mergers are becoming more frequent and digital transformation is a high priority, which will amplify stress. On top of that, the industry is facing a watershed moment in leadership as it loses a generation of older leaders.

“I think that as this industry continues to transform, and as a lot of baby boomer presidents retire, you’re going to have new ideas, new blood, new visions, and that’s going to be in conflict with those of a lot of people who have been at the bank or credit union for decades,” Sullivan says.

Again, that conflict isn’t necessarily bad — new ideas are good and so is institutional wisdom — but letting conflict fester is dangerous. “Address it quickly so you can create a culture where people know it’s safe to share different points of view,” Sullivan says. “We all get locked into these perspectives that we have. But we’ve got to pull back and learn to discuss what we really have in common.”