Coast Capital is not your typical credit union. For starters, they don’t call themselves a credit union. They prefer “Coast Capital Savings.” They refer to members as “customers.” They’ve had Julie, a Vancouver comedian, playing virtual host at their website for many years. And in 2009, they sent a snarky greeting card to Canadian banks as part of a clever guerilla stunt.

But their quirkiness doesn’t end with the advertising and marketing. Coast Capital’s internal culture is equally jovial. When their marketing department had an open position back in 2009, they ran an ad saying, “Wanted: Marketing People. Also, donuts.” There just aren’t enough lolz in bank marketing.

“What we’re trying to do is be that WestJet/Southwest [airline] of financial services,” Redies said of Coast Capital’s brand. “We’re serious about delivering great service and great products to our customers, but we want to have some fun doing it.”

Redies describes Coast Capital as the “disruptive innovator” of the banking world. She says if Coast Capital is going to succeed in framing itself differently, each staff member has to ask, “How do I change the way my customer feels about banking today?”

In 2010, Coast Capital Savings undertook an internal branding challenge. The problem: How could they get their entire staff of nearly 2,000 employees to appreciate and understand that superb customer experiences can be a huge differentiator for the organization?

Coast Capital turned to longtime partner Kaldor, a branding firm with a particular focus on culture building. Kaldor decided that the best way for staff to understand these great customer experiences was to be on the receiving end of superb service themselves.

To get started, Kaldor needed to look no further than Coast Capital’s “Daily Revolutions,” a four-pillar service strategy central to the organization’s Customer Service Initiative. These the key things that all employees are expected to deliver every day:

2) Smart and simple — know your stuff, and present it without jargon

Working in a team together, Coast Capital and Kaldor devised a series of guerilla stunts to align with each of the four pillars in the “Daily Revolutions.”

For the first stunt, they hired a Vancouver improv comedy troupe to hit every Coast Capital Savings location — some 50+ in all — in a single day. Staff hardly knew what to expect when Coast Capital CEO Tracy Redies sent a company-wide email telling everyone that her friend “Pat” would be dropping by for a visit. Indeed Redies sent an army of “Pats” out to her branches — members of the improv group (both guy “Pats” and girl “Pats”). They delivered goodies, tidied up and did whatever they could to help out.

Kaldor’s creative director Sally Douglas said, “We needed this first stunt to have an enormous impact throughout Coast Capital’s world, to make a lasting impression as the first in a series of stunts.”

“When the first stunt took place at all 50+ of their locations, it didn’t take long before emails started landing in in-boxes and their Twitter page started lighting up,” Douglas added. 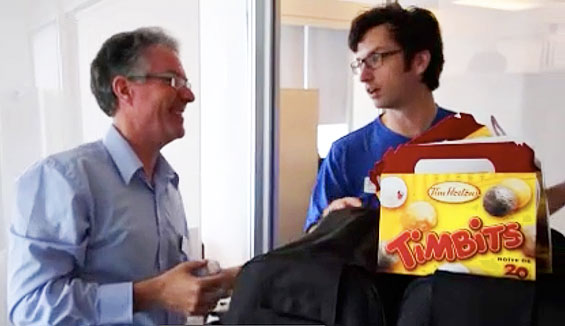 IMPROV TROUPE DELIVERS GOODIES, HELP TO STAFF
Hired comedians donning Coast Capital garb drop by branches to brighten employees’ day.
Some bring food, some coffee, others desserts, then stick around to help out.

In the next guerilla stunt, Coast Capital gave employees a free concierge service. Over the course of two days, emails went out to staff at times designated by location and department size. The emails informed employees they would have a personal assistant for a half day to help them with anything other than banking. A team of six people — five from Coast Capital Savings and one from Kaldor — fielded an array of personal requests. From booking hair appointments to fashion tips to tutoring services to locating used accordions, the response was immediate and appreciated at every level of the company.

In another part of the culture-building campaign, employees were surprised with classy thank you notes, reinforcing the idea that it is usually the small touches that make a big difference in one’s overall feelings about an experience.

After the first four phases of the campaign were complete, the campaign culminated in a “reveal” to employees at Coast Capital’s annual all-staff strategic planning session.

Douglas said employees at the event were impressed with the campaign’s impact. “Coast Capital’s people were really struck by what it means to deliver this level of service from every aspect of their business,” she said.

To follow up, Coast Capital formed a team of “Customer Experience Champs” to uphold the customer experience initiative moving forward.

In response to the internal campaign, a Coast Capital’s lending specialist said, “I think it is a brilliant and creative way to initiate a new way for us to start thinking about our approach to our customers and each other.”

One of Coast Capital’s communications team agreed, saying the campaign inspired employees to live out the brand.

“The unexpected staff experiences have become contagious!” the staffer said.

“Many of the issues we tackle with Coast Capital are very serious and important for their business,” Kaldor’s Douglas told The Financial Brand. “But due to their inherently maverick and fun sensibilities, we’re able to frame the dialog in ways that keep their people engaged.”