Citi is shelling out $41 million over five years to be the marquee sponsor of a massive bike sharing program in New York City launching in July. The Citi Bike initiative will distribute 10,000 blue, Citibank-branded bikes at hundreds of stations in- and around Manhattan. The project, which requires no public funding, is privately sponsored by Citi and MasterCard.

Bikes will be made available to the public for a nominal fee, or regular users can opt for a membership. Riders can pick up a bike at any one of 600 different stations around the city, each branded blue with the Citi logo. The stations consist of a kiosk with a touch-screen, a map of the bike share network, and “docks” where bikes are parked until rented. Anyone can grab any one of the bikes any time they want — twenty-four hours a day, 365 days a year.

In September, the city of New York selected Alta Bicycle Share to operate the system. Soon thereafter, the two forged the $41 million partnership with Citi. MasterCard, whose role is limited to processing payments, paid $6.5 million for its end of the five-year deal. Any profits the bike share program may generate will be divided between the operator of the bike share service and the city of New York.

Marketing responsibilities are shared among all three primary partners (NYC, Citi and Alta), with NYC making an aggressive push. Since September, the city’s transportation department has held 90 public meetings, workshops, open houses and other similar presentations, plus 150 meetings with elected officials, civic and community groups.

There’s more than just philanthropy on the minds of managers at Citi. There will be thousands of Citi-branded bikes — and kiosks — throughout New York City, giving the bank positive name awareness in a prime market. The bike share program skirts NYC laws against ads on transportation vehicles because bikes are human powered. Otherwise, the only other vehicles allowed to have ads are taxis and buses.

The agreement amounts to $2.20 in advertising per day for each bicycle.

“That’s a pretty good deal,” says Bill Wise, the owner of American Mobile Ads, which operates the kind of truck billboards that cost $500 to $1,500 a day but are prohibited in New York City.

Before you roll your eyes and think, “There’s no way our [bank or credit union] could ever manage such a thing,” just remember that this kind of bike sharing program is easily scaled back. If you live in a city with only a 100,000 people, you could probably make a pretty big splash with around 100 bikes.

To ride, one must first purchase a 24-hour, 7-day or Annual pass. Annual memberships are only available online, but everything else can be arranged right at a Citi Bike kiosk. 24-hour and 7-day users will use a temporary unlocking code to remove their bikes from docks, and Annual members will get physical keys. 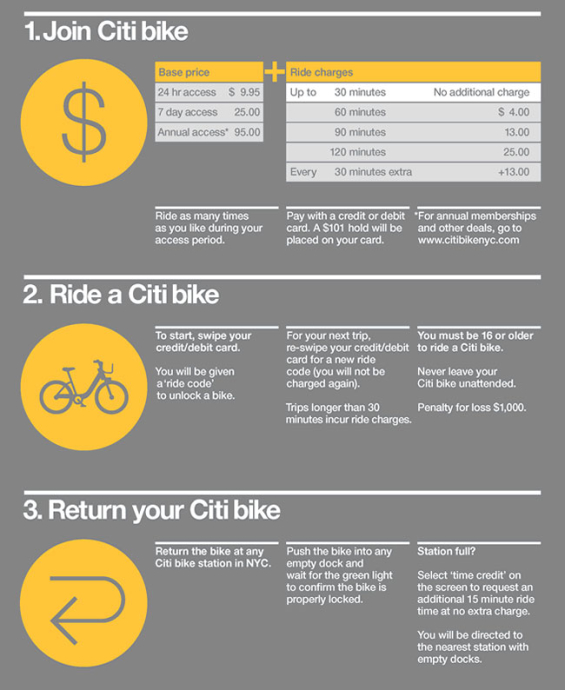 It’s not a bike built for speed, but it is very stable and sturdy. Each bike will be equipped with a bell and both front and rear lights, and each bike will be inscribed with a safety message encouraging helmet use; cautioning riders to yield to pedestrians, avoid riding on sidewalks, ride with traffic and to obey all traffic lights and signs. There are also coat guards on the sides of the back wheel to keep longer coats or dresses from getting caught.

The bikes are manufactured by Quebec-based PBSC Urban Solutions (also known as Bixi) which provided the vehicles for 10 similar programs in cities such as Melbourne, Boston and London. They were designed to be virtually indestructible, capable of surviving neglect and vandalism. 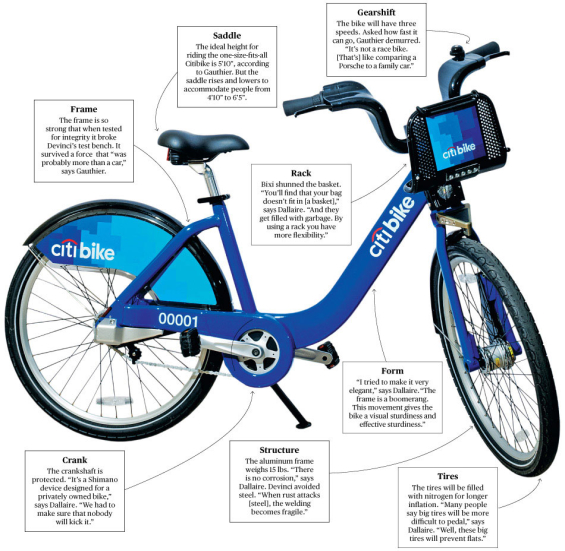 Using the bike share website, members of the public have already proposed approximately 10,000 station locations and more than 63,000 indications of support for individual location ideas. Most of the locations were originally chosen by New Yorkers as a part of the community input process via suggestions on the website. 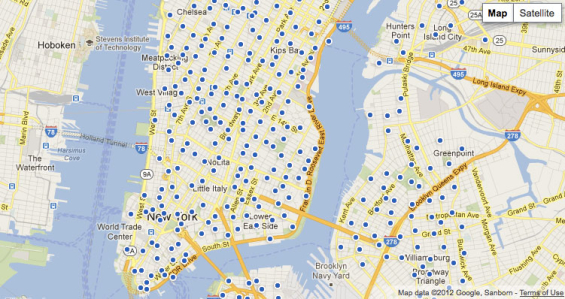 This draft of a map shows proposed locations for Citi Bike stations. New Yorkers picked these sites, submitting their ideas in the tens of thousands on the online suggestion map, in community workshops held throughout the service area, in community board feedback sessions and in hundreds of meetings that neighborhood and other organizations held directly with NYC DOT.

An annual membership cost of $95, which works out to less than the cost of a single monthly unlimited Metro Card. There are also options for daily- and weekly memberships. Members must be at least 16 years old, and are entitled to unlimited use of the system provided they limit their trips to 45 minutes or less. 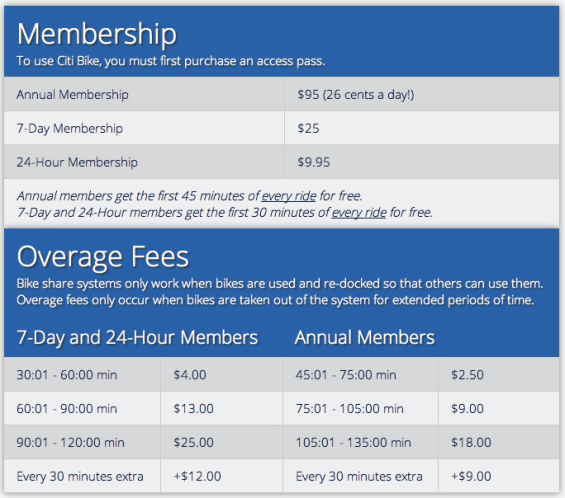 Users embarking on longer trips will incur overage fees. For non members, It’s $4 for an additional 30 minutes, and $13 if you ride for two hours. After two hours, the fees really start to rack up, with a four-hour ride running about $61, although the bike share managers would prefer people rent a bike at a local bike shop.

Vancity, a $15 billion credit union in Canada, was among the first financial institutions in the world to launch a bike sharing program. They launched their initiative in June 2007. In July 2010, Barclays rolled out its Cycle Hire scheme in London. And then there is Regions, who has built a large part of their ad campaign around its signature green bikes.

Washington D.C. introduced an unbranded program in January of this year, dubbed Capital Bikeshare. Some have proposed getting Capital One to sponsor the D.C. program under the intuitive name “Capital One Bikeshare.”