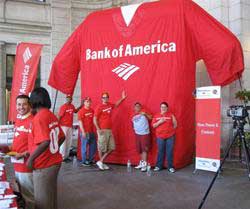 A big, inflatable NFL jersey…that is.

BofA used an old standby — the stamina contest — in its promo for this year’s NFL kickoff. No fancy Web 2.0-style microsite. No online social media component. Nope. Their Now Prove It Challenge tested fans’ limits as they attempted to outlast one another by continuously touching a giant 20-foot inflatable team jersey. The last fan standing won a pair of tickets to every 2008 regular season home game of their favorite team.

The Now Prove It challenge took place in the hometowns of the Carolina Panthers, Dallas Cowboys, New England Patriots and Washington Redskins. All four teams are sponsored by BofA.

The contest in Washington, D.C., started at noon on a Wednesday and ended 19 hours later.

As the Official Bank of the NFL since 2007, Bank of America provides NFL-themed personal banking products nationwide, including credit cards with the logos of each of the 32 NFL teams.