According to the 2013 Edelman Trust Barometer, financial services remained the least trusted sector globally. The massive annual study, now in its thirteenth year, found that more than half (54%) of respondents don’t have much faith in banks. 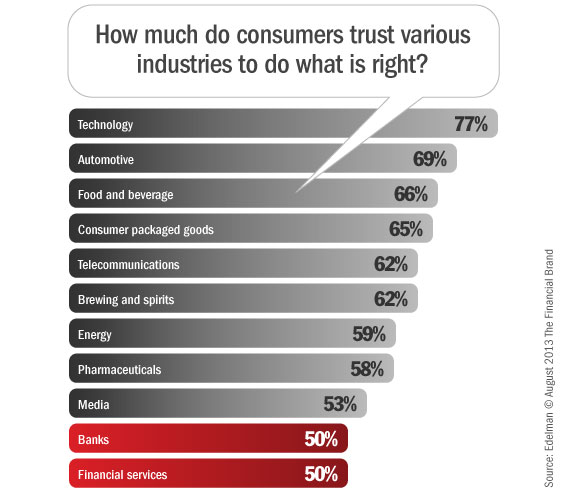 More than one in two people globally (56%) say they were aware of major scandals in the financial industry within the last year. One third reported that their trust in banks declined as a result of learning of the scandals. When asked about the causes of the scandals, 59% of the group believes that the causes are internal and within business’ control. In the UK, three out of every five consumers blame banks’ bad behavior, lousy corporate culture and poor leadership.

More specifically, global respondents who said they were already familiar with the scandals said the top three causes were corporate corruption (25%), culture driven by compensation/bonuses (23%) and a lack of regulation (20%). 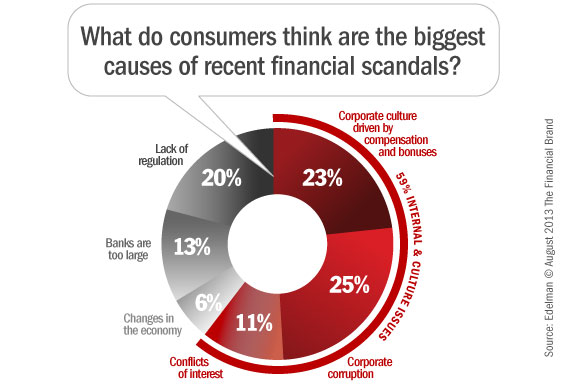 Consumers believe that banks have failed to monitor themselves and keep their greed in check. The think the banking industry needs:

Edelman says this lack of trust is driven by the perception of unethical behavior and poor performance. Consumers in countries with developed economies rate bank performance much lower than emerging markets, and give the industry poor grades in small businesses lending and mortgage loans.

Read More: How to Reverse the Loss of Trust in Financial Institutions

The banking subsector of financial services may have been the most trusted globally among the general public vs. other subsectors Edelman studied (e.g., insurance), though still a muted 50% globally. Financial advisory/asset management is the least trusted financial services sector globally (43%), and is least trusted by countries hardest hit by the Eurozone debt crisis: Germany (23%), Spain (22%), Ireland (22%), and Italy (21%).

“The financial services industry must become more aggressive in explaining its business model, and do away with terms such as ‘proprietary trading,” said Alan VanderMolen, Edelman’s chief of global practices. “People have to understand how banks are making money and how the industry is working to benefit its shareholders and society,” he added.

“The public is demanding that financial services industry leaders reinforce new behaviors throughout their organizations in order to build trust.”
— Richard Edelman, CEO

Breaking down trust by region, the financial services industry is most trusted in the Asia/Pacific region, Latin America, Russia, India, China and South Africa. In North America and the UK/Europe, the banking sector has some trust issues.

About the Study: The 2013 Edelman Trust Barometer consisted of 20-minute online interviews conducted with 26,000 respondents ages 25-64 across 26 countries. All terms within the survey were self-defined.