Subscribe Now Get The Financial Brand's FREE Email Newsletter
The COVID-19 crisis, combined with the recent incidents involving racial injustice, result in a dual pandemic for minority neighborhoods across the country. Financial institutions must increase their resolve to support racial and gender equality, diversity and inclusion within their organizations and in their communities.

While many financial firms have taken a rather passive position in the past around crises, the COVID-19 pandemic forced banks and credit unions to think more broadly about how they could positively impact the community and their employees. From allocating funds for small businesses, to changing loan terms for consumers, to helping employees cope in a remote working environment, many financial institutions moved to the forefront to reassess their corporate social responsibility (CSR) programs.

Beyond banking-related initiatives, some firms also made donations to health facilities and local governments, while others purchased products such as gowns, masks, sanitizers and ventilators to fight the virus. While there were exceptions, the banking community has done well responding to COVID-19.

Then a second crisis hit.

With the financial community beginning to look at “back to work” scenarios in a post-COVID-19 world, a “social pandemic” took over the public consciousness prompted by the death of George Floyd. Banks and credit unions across the U.S. and beyond were confronted with how to respond to the racial injustice faced by the Black community and whether to align with the Black Lives Matter movement.

Without any rule book or standards to follow, financial institutions were called on again to respond in a way that would support the community outside traditional profit-making norms. For an industry wary of conflict, and with a rather spotty record regarding employee and management diversity, a well-crafted press release or a modest donation was not enough.

There is no debate that banks and credit unions have an important role in the community. Beyond being a place to safely store funds or to get access to credit, financial institutions have a corporate social responsibility to voluntarily contribute to a better society as a whole. This responsibility goes beyond regulated ethics to include moral obligations.

In the past, most organizations positioned their corporate social responsibility in the form of donations to organizations considered beneficial to the communities served. More recently, CSR has also taken the form of internal policies that impact employees and the workplace.

It is during times of crisis that financial institutions are required to not only join the discussion, but be part of the solution. The importance of financial institutions during these times cannot be overstated. Unfortunately, when it comes to sensitive social issues, many banks and credit unions have often relied on rhetoric or fancy press releases instead of concrete commitment or investment.

In an exclusive interview for the Banking Transformed podcast, Mike Jarvis, legendary college basketball coach stated, “Institutions should set the tone as it relates to opportunities for minorities and people of color and especially women. In the black community, and in most lower socioeconomic communities, the women are the key because they hold the families together.” 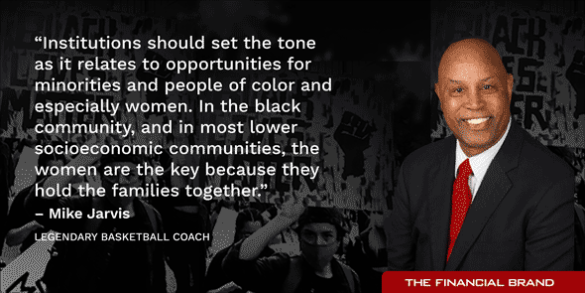 According to research firm Resonate, “It’s never been more important for brands to realign themselves with what matters most to their customers. In times of crisis, people fall back on their core values and preferences to guide their decision-making.”

At a bare minimum, financial institutions with a CSR program are expected to act in a non-discriminatory and socially aware manner, becoming involved with worthwhile causes outside of profit-making activities. It is important that the policies are consistent over time and be reflected internally as well as externally. Implemented well, CSR programs can improve a brand’s image and the bottom line.

Read More: What Financial Institutions Must Know About PPP Suits Against Big Banks

Over the past couple weeks, people across the globe have taken to the streets once again to protest against racial injustice after the murder of George Floyd. This has occurred against the backdrop of a global health pandemic that is impacting minority neighborhoods more than other areas.

The question becomes, can the banking industry continue to avoid taking a public stance on sensitive issues like Black Lives Matter despite the potential of polarizing key stakeholders? More importantly, is it time for financial institutions to invest in initiatives that can bring about change?

In other words, consumers want change and they prefer organizations that support equality, diversity and inclusion. But remember, people are sensitive to tone-deaf or empty statements, and there’s no shortage of blunt criticisms online.

Bank of America was early to commit significant funds for communities most impacted by COVID-19 and racial inequality. They announced a commitment of $1 billion over the next four years to assist in the areas of healthcare, job training, small business growth and housing.

“The events of the past week have created a sense of true urgency that has arisen across our nation, particularly in view of the racial injustices we have seen in the communities where we work and live,”CEO Brian Moynihan said. “We all need to do more.”

A message was also sent to all Bank of America employees emphasizing the responsibility the bank has to “help address important societal priorities.”

Many other financial and non-financial institutions have also stepped up.

“Organizations need to build relationships with the people within the community and not wait for a crisis to occur. Ask, ‘What can we do?’, ‘Where can we invest?’, ‘How can leverage our people?’ before crazy things happen,” stated Mike Jarvis. 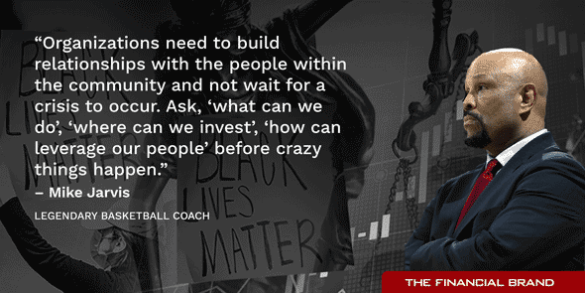 While COVID-19 has impacted the entire world to some degree, the impact on minorities is greatest as a result of lower access to health care, categories of employment, housing status, income and social norms. Add the dynamic of higher unemployment rates, greater small business failures and lower cash reserves and these communities are experiencing a ‘perfect storm’ of unprecedented magnitude.

The impact of COVID-19, both in lives lost and economic devastation, is impacting the most vulnerable minority communities more than any other segment. This exacerbates racial and economic disparities that already existed. This should be unacceptable to all financial institutions.

It is more important than ever for banks and credit unions to step up and commit time and resources to address these issues. This commitment may never be regulated, but there is a moral responsibility for all institutions to support their communities.

Then again, if the White House changes hands, a new administration could certainly require a great deal more from a banking community that has been slow to respond in many cases.