Subscribe Now Get The Financial Brand's FREE Email Newsletter
The market for student loans is set to explode... or implode, depending on your perspective. Here are 10 things every bank and credit union marketing executive needs to know.
Subscribe Now!

Over the course of the past four years, the student debt total has risen by $327 billion — an increase of 51.2% — while the other forms of debt have fallen by a combined $1.7 trillion.

1. There is a Crisis

Many financial marketers don’t know there is a crisis in student loans. Many banks and credit unions don’t pay much attention to this segment of the lending universe because they don’t offer student loans themselves. But by the time you’re finished with this article, you’ll see there are big problems (and perhaps big opportunities) in the student lending space.

“There is far too much debt relative to income levels, and it could be argued that the ROI on a college degree is not what it once was,” Bator writes in RFG’s blog. “There is a good possibility that we could experience the same type of collapse in student lending as was seen in mortgage debt, although in this case the debt holder is primarily the federal government, so the impact would not be felt as directly by financial institutions.”

“Think hard before you decide to enter the arena of student lending,” he cautions.

As you read this, U.S. student loan debt has passed the $1 trillion mark. It is the largest source of unsecured consumer debt in the country, surpassing credit cards and also outpacing auto lending. Student debt is the only kind of household debt that continued to rise through the Great Recession and now has the second largest balance after mortgage debt. 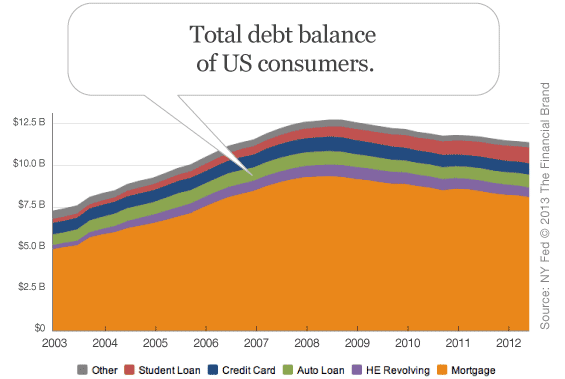 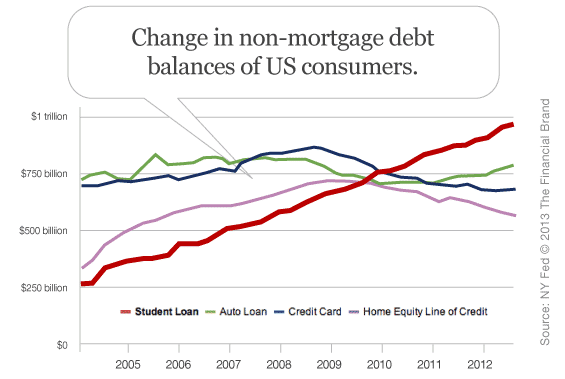 3. Borrowers of All Ages Owe More on Their Student Loans and for Longer 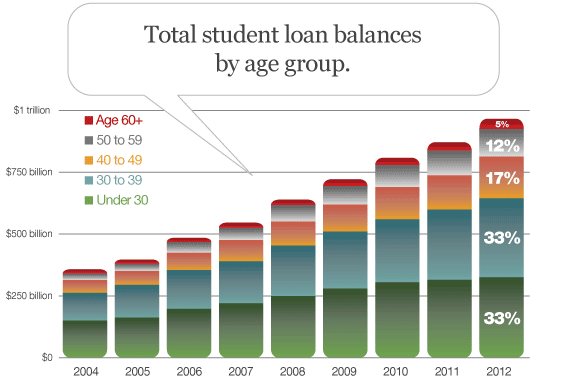 A steadily increasing share of younger people are taking out student loans. In 2004, only about 27% of 25 year olds had student debt; in comparison, eight years later in 2012, the proportion of 25 year-olds with student debt increased to about 43%.

“Thanks to a law passed in 1998 by the same government that is giving out all the student loans,” he continues, “borrowers can’t discharge federal student loans in bankruptcy.”

Because student loans take many borrowers a lifetime to repay, some people think they should be rebranded as an “educational mortgage,” because it more accurately describes the nature of the debt. 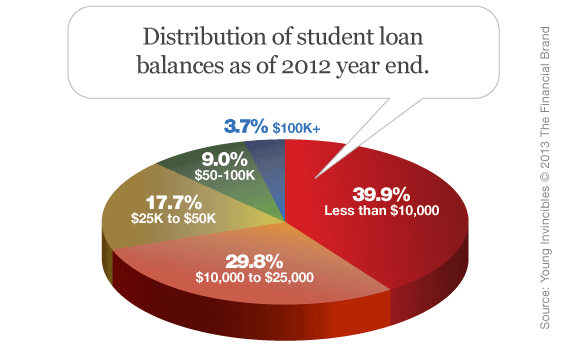 By late last year, slightly above 4% of 25- to 30-year olds with student debt were granted a mortgage. In 2005, that percentage stood at nearly 9%, according to the NY Fed. The most precipitous drop was among those who owe $100,000 or more. New mortgages among these more deeply indebted borrowers have declined 10 percentage points, from above 16% in 2005 to a little more than 6% today.

A recent Pew Research survey found that the share of millennials who own their homes had fallen from 40 percent to 34 percent during the recession, with a similar decline in residential debt. Young home buyers now make up their smallest share in the housing market in more than a decade.

“Delinquent student loan borrowers have a very difficult time accessing credit and the share of those borrowers is greater today than in the past,” says Donghoon Lee, a senior economist for the NY Fed.

Credit score behemoth FICO says student loans receive no special treatment in its scores, and are treated like any other installment loan; the score doesn’t employ any variables that specifically evaluate student loan data. FICO says it makes no difference to the score if the student loan is backed by the government or a private loan from a lender.

FICO adds that while student loan debt can factor into its score, credit card debt has a larger influence. “That’s because we’ve found that credit card indebtedness has a stronger statistical correlation with future borrower performance than installment loan indebtedness.”

FICO also found that recent vintages of student loans have noticeably lower credit scores than those of earlier vintages. Since 2005, the median score has dropped 17 points from 659 to 641. FICO says these findings indicate that in recent years student loan lenders have made student loans available to more consumers with lower credit quality.

6. Student Borrowers Don’t Know What They Are Getting Into

According to a study by the Young Invincibles, more than 40% of high-debt student-loan borrowers didn’t receive in-person or online counseling for U.S. government loans, even though it’s a federally mandatory requirement.

About 65% misunderstood or were surprised by aspects of their student loans or the student loan process. Approximately two-thirds of private loan borrowers, including those who took out both private and federal loans, said that they did not understand the major differences between their private and federal options. When talking about specific aspects that they misunderstood or found surprising, about 20% of respondents mentioned their repayment terms, 20% mentioned the amount of their monthly payments, and 15% mentioned their loans’ interest rates.

56% of respondents with private loans only said that their school offered them private loans to pay for tuition or other education related expenses. However, nearly 70% of these borrowers said that they were not informed by their loan company, bank or school about their federal student loan options

7. Marketing Works… But Schools Are The Gatekeepers

8. Delinquencies on Student Loans Are Way Up

Of the $1 trillion or so in outstanding student loan debt, approximately $85 billion is past due. Out of that, loans from private institutions represent $8 billion, or 850,000 distinct loans in default. 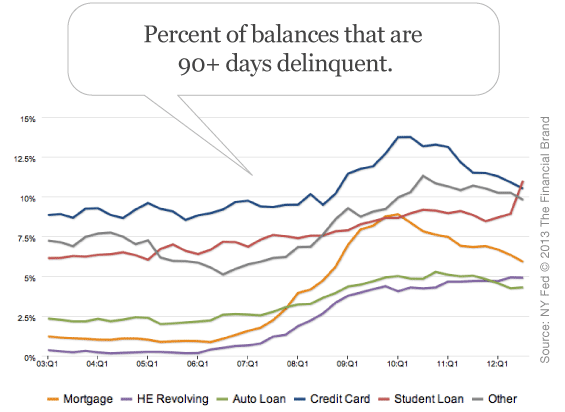 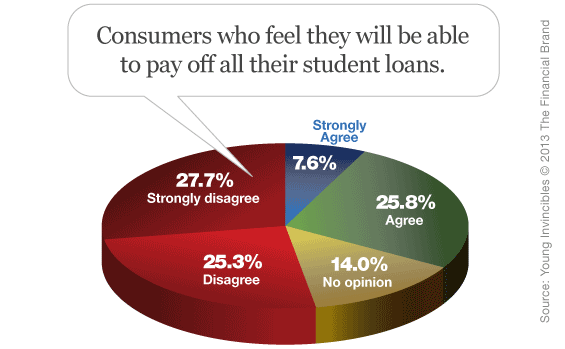 According to the Department of Education, more than one in 10 borrowers defaulted on their federal loans within the first three years they are required to make payments. 8.8% of federally guaranteed student loans that entered repayment in 2009 were in default by the end of 2010 (that means nine months of missed payments) — a sharp increase over the historical average of around 5%. The default rate rose to 9.1% the following year.

9. Big Banks Are Pulling Out of the Student Lending Market

Banks and other private student lenders have already seen their role in the market diminish, after the federal government in 2010 stopped guaranteeing loans they originated.

JPMorgan Chase stopped extending student loans to non-customers back in July 2012. “The private student loan market has continued to decline and government programs have expanded to help more students and their families,” Chase spokesman Steve O’Hallaran said in an interview with The Huffington Post.

US Bank also pulled out of the student lending market last spring. In March 2012, they sent a letter to participating colleges and universities saying that it would no longer be accepting student loan applications.

“The reasoning is we’re a very small player, less than 1.5% of market share,” US Bank spokesman Thomas Joyce said. “It’s a very small business for the bank, and we’ve decided to make a strategic shift and move resources.”

There’s probably a lot more behind the story than such soundbites — carefully crafted for public consumption — suggest.

According to American Banker, some lenders including Discover Financial Services are ramping up their participation in the market. Discover has snatched up several large student loan portfolios over the past year and is growing originations.

The Bureau is looking for ways that private student loan borrowers can have more flexible repayment options and is seeking input on a variety of issues related to repayment affordability, including:

“What we are likely to see over the next few months is a lot of private education lenders rethinking the product, particularly if it appears that the CFPB is going to become more activist,” says Kevin Petrasic, a partner with law firm Paul Hastings.

“In the name of helping students, the Federal government is driving lenders out of the student loan business,” notes one observer of the situation. “Could this be what the future looks like for other financial products after a few years of protection by the Consumer Bureau?