ABNB Federal Credit Union understood it would be crucial for employees to embrace its new brand and identity, so they launched the brand internally with a big staff event before rolling it out to members and the general public.

As employees arrived at the credit union’s corporate headquarters for the marketing pep rally, they were greeted with a set of branded gift items, an internal culture booklet and a music CD themed around ABNB’s brand theme. At the event, VPs reinforced the new brand identity with a brand video, a skit, a guitar performance, and personal stories.

“The book really shows how the new brand identity is an evolution of ABNB that grew out of what the employees and members told us in our research,” said Megan Miranda, Account Executive with Third Degree Advertising, the agency that developed ABNB’s branding program.

Along with the book, employees received a mix CD themed around “feelings,” a nod to the idea that ABNB employees are “hooked on a feeling” of service. Other gifts for employees included branded lunch totes and backpacks

“During the pep rally, it was really exciting to see the employees’ reactions and here their comments,” Miranda said. “You could tell that the new brand really resonated with them.”

As a follow up after the event, employees also received a direct mail piece at their home address. 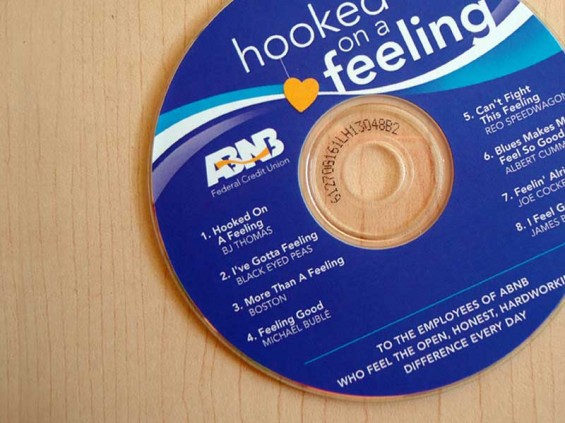 A MIX CD LOADED WITH “FEELING”
Each employee left with a small gift along with a homemade mix CD from the CEO to help express.

Over the past three years, ABNB had been experiencing a decline in membership. The management team was also concerned that the name “ABNB” itself might be creating a barrier to growth- that the community either didn’t know what the letters stood for (“Amphibious Base Naval Base”) or assumed membership was closed.

“Our own employees sometimes joke it stands for Apples Bananas Nuts and Berries,” ABNB said.

The name change decision sparked a debate with strong feelings on both sides. Ultimately, the ABNB leadership team decided to maintain the current name and focus on reframing the experience that the name stood for.

“When we began working with ABNB, we wanted to help them redefine and truly capture what make ABNB unique,” explained Miranda. “That really started internally, with the employees.”

“During the discovery phase of our process, we spent time interviewing employees to help us learn about ABNB’s values and personality,” Miranda said. “Their comments and insights helped us define the basis for the new brand identity, so you could say the employees were really involved from the start.”

Miranda said the “Open. Honest. Hardworking.” tagline has two interpretations, depending on whether you’re an employee describing yourself or a member describing the credit union. “The tagline embodies both the character of the ABNB employees themselves and the characteristics of the community they serve,” she said.

“’Open’ not only addresses the brand’s personality, it also speaks to the fact that ABNB is open to the entire local community so anybody can become a member — something that is very important to ABNB’s growth strategy,” Miranda added.

SENIOR MANAGERS GET IN THE ACT
The all-staff event included ABNB VPs leading skits, sharing stories
and singing songs to get everyone excited about the new brand. 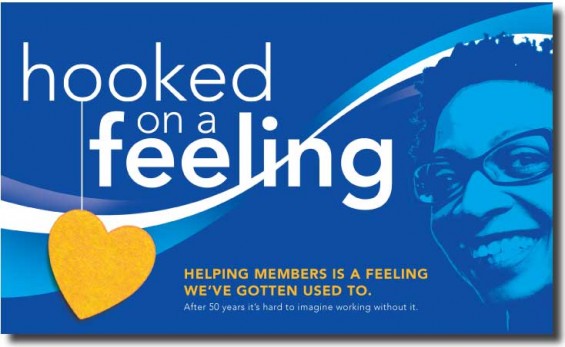 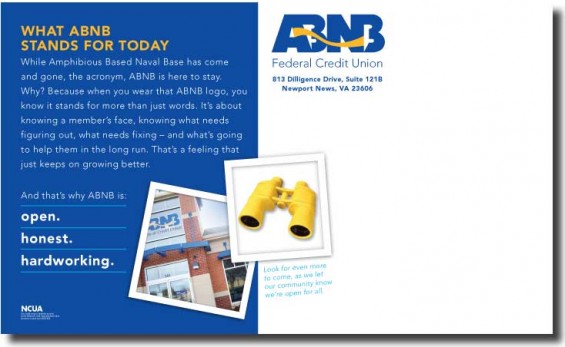