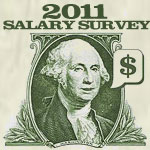 The “2011 Salary Survey,” a study conducted by the Marketing Association of Credit Unions (MAC) in conjunction with Data Based Marketing, revealed that few credit union marketing employees are happy with their jobs, and are making less than they were five years ago when adjusting their salaries for inflation.

The study found that the average salary was $65,000, a figure that directly correlated to the size of the credit union, industry experience, job title and other factors. The median was $58,500.

Salaries have not kept pace with inflation either. MAC’s 2006 salary survey indicated real average salaries that were about 10% higher than in 2010.

Of those earning the most in the credit union marketing field, nearly half (47%) had a Master’s degree.

The average age for respondents was 38.4. By comparison, the US average is 44.7. Those in the 45 to 54 age group were more likely to work 50+ hours per week, while younger employees were more likely to work fewer hours (<40 hours per week). The study found that those who were paid more worked longer hours (50+ per week) vs. those who preferred the standard work load.

The data showed that there are relatively few happy credit union marketers in the nation’s larger credit unions. Work weeks that average over 40 hours might explain part of this ambivalence. Another explanation could be that, on average, men earn more than women, despite the fact that women outnumber men 3-to-1 in credit union marketing positions. An astonishing 86% of those in the lowest income quintile were women.

Not even one quarter of the survey’s participants said there was “a strong likelihood” that they would stay in the credit union industry. Those with mid-term tenures were the ones most likely to have the lowest likelihood. Give them a better opportunity and most of them could be out the industry door.

The Great Recession pushed marketing expenditures down about 13% in 2009 and they rose only 4% in 2010. After growing for most of the decade, credit union employment in the US dropped in 2009 and 2010.

The average credit union asset size was $417 million, with an average of around 42,500 members.