Subscribe Now Get The Financial Brand's FREE Email Newsletter
Umpqua Bank wants everyone to have a BFF — a Best Financial Friend. Their new mobile app puts an Umpqua employee in every customer's back pocket, so people can contact the bank about anything from anywhere. It's like private banking for today's mass market digital consumer.

Cort O’Haver, the CEO of Umpqua Bank, is facing some interesting challenges these days. In early 2017, he took the reins of the legendary financial institution from Ray Davis — not an easy task, and definitely some very big shoes to fill. Then one of his first initiatives was to launch a radical new “human + digital” retail delivery strategy.

It’s called BFF, a new mobile app that allows customers to conduct virtually every interaction they could perform in a physical branch digitally, with the only exception being cash transactions. Customers can also receive support and advice through their BFF financial expert, who serves as their personal private banker devoted to their banking needs — via voice, video or chat.

Umpqua’s branches, which it calls stores, are celebrated across the banking industry. One of the first financial institutions to pioneer stores as community centers, Umpqua Bank’s brand in the brick-and-mortar channel is utterly distinctive. The Financial Brand has featured nearly a dozen of the bank’s branches in articles over the year. Their locations boast interactive Discovery Walls, Ritz Carlton style concierge desks, and digital cafés complete with Umpqua’s own signature blend of coffee.

The problem, explains O’Haver, is that customers are just not visiting its stores as much as they used to. O’Haver cites research from PwC that shows that 46% of consumers interact with banks and credit unions through digital channels and stay out of branches altogether, a 30% increase since 2012.

But rather than focus exclusively on moving customers to self-service via digital — something which disintermediates people from the relationship — Umpqua Bank’s strategy is to keep the “bank + consumer” relationship intact using technology to bring the two closer together. That’s their “human + digital” strategy.

Nearly every other financial institution on the planet is pursuing one of two strategies. Either they are trying to drive people out of branches by pushing digital channels, or they are scrambling to find new and creative ways to draw people back into branches. Umpqua doesn’t see this as a binary, black-or-white choice.

O’Haver’s approach is more savvy, nuanced and pragmatic. Yes, digital is changing how customers interact with their financial institution, but he says that branches still play a vital role. Umpqua — a bank that built its reputation on their neighborhood store concept — will simply be keeping pace with these changes.

Umpqua says it is still testing its human + digital strategy, and O’Haver admits that they don’t have all the answers yet. The bank just completed a six-month mobile-based pilot with 1,800 customers, and is now rolling out the program to three markets in the Portland metro area. BFF concierge desks will help customers connect with BFFs who (at least for now) will be physically located in stores.

Every single Umpqua customer in the pilot will have access their own BFF; there’s no account minimums or other qualifying criteria. And just like you get to pick your best friend in real life, customers will literally get to pick the Best Financial Friend they want to work with. 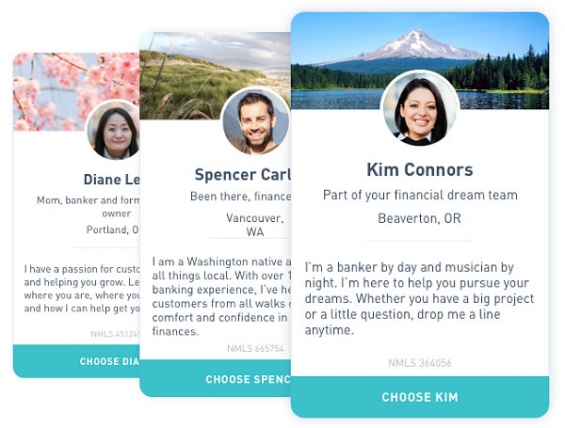 In the BFF app, each employee profile includes a photo, background info, details on their experience in the banking industry, and personal information — hobbies and whatnot, so customers can pick a BFF they feel comfortable and identify with.

Interestingly, digital interaction seems to be enough for customers who participated in the pilot so far. Only one customer asked to meet his BFF in person — and that was to get together for a drink.

No Rest For Umpqua’s Beloved Bankers?

Umpqua customers may not visit the bank’s stores as much as they used to, but they still love Umpqua’s employees. Each store has a phone for customers that rings directly into O’Haver’s office. “99% of those calls are customers calling to thank me for hiring Jim or Jennifer the banker,” says O’Haver. “Our challenge is how to continue that exceptional face-to-face service digitally.”

Umpqua’s mission for its human-digital initiative is to offer personalized banking anytime, anywhere. Say someone picks Jennifer the banker as your BFF. The goal is having Jennifer available 24/7. But wait, Jennifer has to sleep, right? And that’s one of the details that Umpqua is working out, says O’Haver.

Fortunately artificial intelligence will step in to field the most obvious and predictable customer queries. If a customer texts their BFF to know their account balance, for instance, or some other similarly transactional question, AI will handle the request.

“The platform uses data and analytics to prioritize which customer inquiries coming in do we need to respond to first, for example,” explains Eve Callahan, SVP at Umpqua Bank. “It also can summarize months of customer exchange with somebody and bring up the most salient points. Who has something that’s urgent and who’s asking a question that could wait a couple of hours?”

Another issue is that most people consider texting an immediate medium; you text your spouse or friends and expect them to answer you right away. With those kind of expectations in that type of environment, Jennifer the banker won’t get any relief.

Initial testing shows that customers really only expect an instant response in emergencies, and under extreme or unusual circumstances. As long as customers knew that their BFF had received their text, they were comfortable with a “reasonable response time.” Of course, what’s considered “reasonable” to one person might be an insufferably long delay to someone else.

O’Haver was also concerned that customers might be unwilling to text sensitive financial information, but he says the pilot proved his worries were unfounded. If customers know the person they are texting and are doing so in a secure environment, they are willing to share account numbers, social security numbers, and ask personal financial questions.

Will BFF bankers be overwhelmed with texts? Not likely, says O’Haver, since customers in the pilot only texted sporadically. O’Haver says that the human- + digital initiative is highly scalable — certainly more scalable than full-time staff in a store. Umpqua isn’t sure how many customers one BFF can handle quite yet, but they currently estimate one BFF for every 1,000 customers.

Zigging When Everyone Else Zags

Many banks are on a mission to move consumers to self-service digital channels. If those consumers need help or simply want to speak to a human, they can dial the call center, wait on hold, and then speak to a stranger. Such is the modern banking landscape, take it or leave it.

Contrast Umpqua’s human + digital strategy with financial institutions such as Bank of America, which is piloting branches devoid of humans. Umpqua is keeping people in the equation, just marginalizing their role specifically within a branch environment.

“Most banks are providing a digital offering as an interface,” Explains O’Haver. “That actually separates the bank from its customers. Some even charge you to use the service.”

Other banks and credit unions offer video banking in which the customer uses video conferencing to speak to an expert in a centralized location. However, with nearly every video banking service out there today, people still have to leave their home or office and go to a branch (a proposition The Financial Brand regards as both ludicrous and doomed to fail). It makes much more sense for customers to be able to talk or text a banker from their home or office or wherever; anyone making the effort to visit an actual branch, will likely want to talk to a real human, face-to-face.

The human + digital initiative isn’t a cost-savings play, O’Haver stresses. It is a way to build deeper relationships with customers. It also part of a customer acquisition strategy, with Umpqua hoping its human-digital focus appeals to those customers who want the digital capabilities of a big bank but with a community bank feel.

“The value of brick and mortar has changed,” says O’Haver, “but the value of humans hasn’t changed. Our human-digital initiative is way for us to provide the same level of service to customers but in a medium they are asking for.”

So what will happen to all those neighborhood stores that have become such a strong, signature element of the Umpqua brand? O’Haver says some will close, some will consolidate, and some will remain but look different.

“Where we locate stores and what we do with them is something we debate almost every day,” says O’Haver. “It’s clear our stores are becoming less relevant to our customers, so we will reduce our store count by up to 35% over the next three years. We will close 30 stores in the first quarter of 2018, and migrate those customers to digital channels.”

However, O’Haver promises that in communities where Umpqua is the only game in town, the store will definitely remain open.

“We have some stores that have been the community for 60 years and we won’t close those. But in areas where we have a good concentration of stores and a customer base that is highly adaptable to mobile, then yes, we will consolidate.”

Some customers who really want a store nearby may chose to leave, but O’Haver believes a combination of ATMs and the BFF app will address their needs, questions and concerns. Or perhaps Umpqua will leave some bankers right in the community who work from a home office rather than an official store. O’Haver says bank is still formulating that strategy.

“The majority of consumers are relatively sophisticated,” adds O’Haver. “We should give them credit to adapt.”

Store closures will mean fewer employees. But since retail banking has a high rate of turnover, organic attrition will help lessen any sting. In the meantime, becoming a part of the BFF program will require staff to undergo additional levels of training. Many employees are expressing interest in the new role.

“To stand still when customers tell us they don’t want to visit stores means you will lose your customers anyway.”