Subscribe Now Get The Financial Brand's FREE Email Newsletter
Banking and insurance have always been separate functions, even though they're closely connected. Consumers get a car loan or a mortgage through their financial institution and go find an insurance company to insure their purchase. Yet, the banking industry is learning that consumers now want it in one place — inspiring a new impetus to mix banking and insurance.

Everyone craves that Amazon experience — one easy stop for all the products they want. It helps, too, that Amazon is quick. People get everything they need on their doorstep in two days — certainly beats going to ten different department stores to find clothes that don’t fit right.

It shouldn’t come as a surprise, then, that consumers want the same experience for financial products too. Why go to a separate company for auto and home policies if people could instead roll insurance right into their banking experience? Rather than looking at dozens of insurance websites individually (or even perusing listings in an aggregator site), it would be easier for consumers to shop in one place and pay the bills without having to use third-party apps.

To test the theory and gauge how many people are looking into buying insurance from their bank or credit union, PYMNTS.com surveyed over 2,300 consumers and found over one in four people (26%) would consider purchasing life insurance policies through their primary financial institution.

But only 7% of respondents reported having bought life insurance from their primary financial institution in the first place, and just half of that 7% said they would do it again.

Over a quarter of consumers say they would go to their banking provider for insurance. It could be a supplementary source of income for banks and credit unions if overdraft fees die out.

Although it appears the number of people who know about buying insurance from their banking provider is still low, Insuritas CEO Jeff Chesky told The Financial Brand he thinks it’s growing slowly, and he expects it will soon explode throughout the financial industry.

“For years, people thought we were crazy and then they turned around and said, ‘Oh my gosh, that’s probably the wave of the future,” Chesky says about his company, which builds, deploys and operates white-labeled insurance agencies within financial institutions.

Selling insurance through a financial institution was not even legal until 1999 when the Gramm-Leach-Bliley Act was passed. Until GLB, banks and credit unions could not encroach on investment banking or insurance territory and vice versa.

Established in 1998, Insuritas now works with just under 200 banks and credit unions in the U.S. Customers of these institutions can now purchase property, casualty, home and auto insurance through their banking provider’s website.

An outsourced agency approach, such as Insuritas, is not the only option financial institutions have. Some have established their own agencies, hiring and training knowledgeable and licensed staff. Others have acquired local agencies. The pros and cons of various approaches are covered in an earlier article based on three institution’s experiences.

How the Selling of Insurance Has Changed

While more financial institutions are testing the waters, there’s not yet plentiful information available about banks and credit unions delivering insurance on their front-end systems. Chesky says this may be because insurance providers are still trying to develop and sell insurance products in their own system — like they used to.

“It’s been very hard for the insurance carriers to think about using a platform like ours,” Chesky says, attributing it to the fact insurance carriers like to be running the show. “In the old days, they could control the little agent.”

But the traditional insurance system is breaking down, Chesky maintains, adding they are forced to innovate how they distribute policies to their customers. Whereas insurance carriers may have had an entire inventory of local agencies 10 to 15 years ago, they are reduced to reaching customers digitally.

“They have to unplug from a distribution network that was in place for the last 100 years,” he continues. “The local and little agencies have gone away.”

It used to be that insurance providers were in control of the smaller agencies. Now banks and credit unions can be the source of insurance products, but they would be the ones in control.

Not that financial institutions and insurance companies haven’t worked together before. In the past, some banks and credit unions would sell consumer information to insurance companies so the providers knew who they could advertise to. Chesky says it was like “a stepchild to the core business.”

The passage of the Consumer Privacy Act changed that, making such data sharing much more difficult. Yet, if the two parties could share the data, the process becomes that much easier for the consumer.

“Financial institutions have data that helps a carrier price the risk without even asking an interview question,” he adds. There’s this convergence with these ecosystems — banks and credit unions — and they are now empowered if they can own an agency without having to buy a local brick-and-mortar business, Chesky observes.

It could be a low-risk venture. Embedding existing insurance providers into a financial institution would make them wholly-owned affiliates, he explains — a division of the banking provider.

“Banking providers can move nonpublic information between wholly-owned affiliates without the customer needing to opt in,” Chesky says. “It creates this enormous opportunity.”

Insuritas, in particular, takes its catalog of insurance providers and offers it to banks and credit unions to embed into their website. It can be as easy as adding a menu tab right next to the financial institution’s other services.

The company will then help the bank or credit union set up an external website — in the case of Northwest Bank, they call it Northwest Insurance Services — so consumers can shop around for an insurance policy which fits their needs. 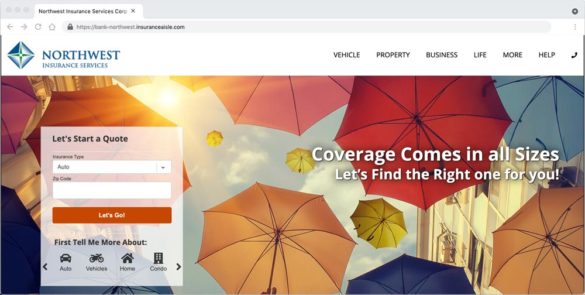 It’s beneficial for both financial institutions and insurance providers to tag team their existing services. For one, banking providers already have thousands — if not millions — of consumers banking online on a daily basis.

“Bankers get all of this traffic for free to their websites day in and day out, but there’s no shopping cart,” says Chesky, adding the banking providers are providing a free tool (online and mobile banking) to their consumers, but there is no monetary value unless they can offer additional services.

Banks and credit unions have millions of eyes looking at their mobile app and website on a daily basis. Offering insurance products means financial institutions can profit and keep customers happy.

However, if a bank integrates insurance providers into their backend systems, they can earn non-interest income cyclically — what insurance agents consider commission — instead of relying solely on net-interest income.

It’s a win for the insurance companies as well, who prefer to offer their services to people who are banked, Chesky notes. Instead of advertising through various marketing methods, they can reach their target audiences without the extra footwork.