According to Protiviti’s 2015 Consumer Banking & Payments Survey, 84% of consumers are still visiting a branch at least once a month — a finding that’s sure to enflame the debate raging over the relevance of branches in retail banking. But Protiviti is unwaivering with its assertion: brick-and-mortar locations still connect with consumers.

To draw its conclusions, Protiviti surveyed more than 2,000 consumers age 20 to 69 in the United States. Researchers were specifically looking to identify the perceptual and behavioral trends in banking practices, including service delivery preferences, online banking, credit card security and the adoption of new payment products. The study breaks out results by gender and age demographics. 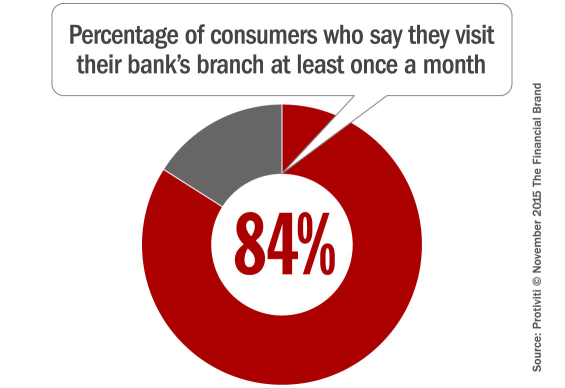 Are Branches Dying or Not?

Protiviti cites data from the FDIC reporting the total number of bank branches in the U.S. at the end of 2014 was 82,613. That’s down only 1/10th of a percent from a peak of 83,663 in 2012. Indeed, the total number of branches is up 93% from 1984, when there had been a grand total of 42,717. Since then, the net number of banking institutions has fallen 61%; meanwhile, physical branches have nearly doubled. Most of that increase occurred since 1995, the dawn of online banking in a commercially-viable form.

Protiviti feels strongly that in-person branch banking is more than just “the channel of last resort” — where consumers go when thwarted by another channel. They say there are some differences across age, income and gender groups, but not as many as you might think.

“There is ample evidence in our study to suggest that branches remain not only viable, but vital at a time of increasing focus on the customer experience,” says Jason Goldberg, a director in Protiviti’s business performance improvement practice. “Even as consumers embrace the convenience of new technology for routine queries and transactions, branches remain core to the banking relationship.”

“The branch of tomorrow may bear little resemblance to the branch of ten years ago, or even today,” Goldberg concedes. “But predictions calling for the imminent demise of branch banking are, to say the least, premature.” 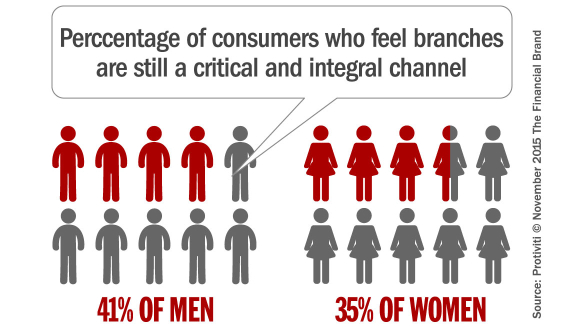 The Omnichannel Preference: What, How & Where?

Protiviti cautions that banks and credit unions must formulate their customer-experience strategy around consumers’ omnichannel expectations.”Many product marketers and IT managers fall into the ‘replacement trap,'” Goldberg says. “As in, the mobile channel should replace older, traditional channels, such as branches. They need to be looking at how channels should interact, how products work together.”

“The survey suggests that in the mind of consumers, branches continue to be the place where their money lives, while the web and mobile are applications that direct the movement of that money,” adds Goldberg. “Consumers clearly seek an omnichannel experience, where they move within and between channels for product purchases and account servicing and management.” 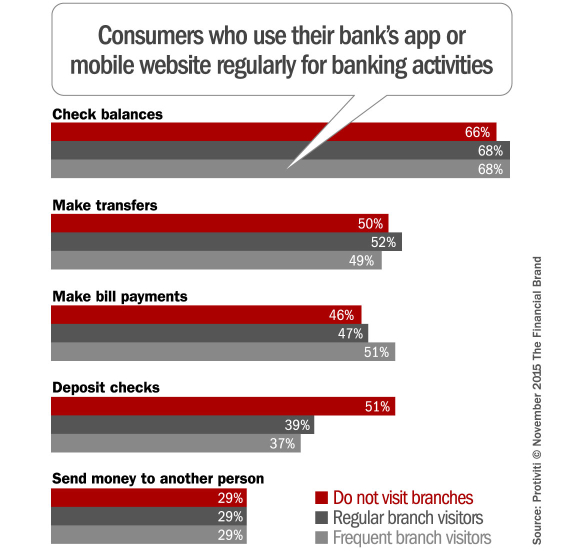 The study found that younger Millennials (under age 30) are using mobile applications most frequently, a trend that holds up across various types of digital behaviors — from checking balances (83%) to sending money (46%). Millennials are also more likely to use their phones to make a variety of smartphone purchases such as merchandise, media and groceries. Not surprisingly, in-store and online purchases using smartphones decline with age. 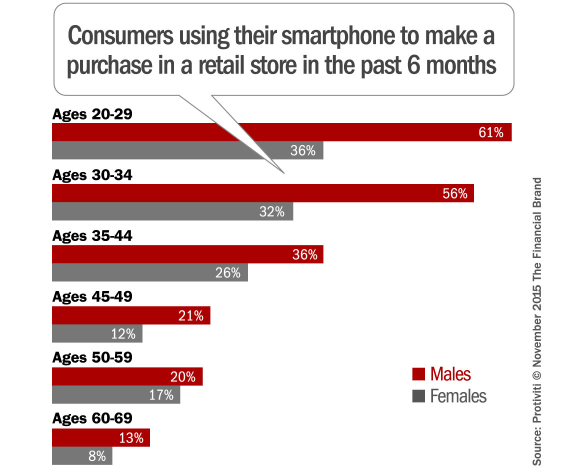 Also on the minds of many consumers and retailers is the new EMV (Europay, Mastercard and Visa) transition. As of October 1, 2015, brick-and-mortar retailers that do not accept and use chip-and-signature transactions will bear the liability for fraudulent transactions. According to consumers in Protiviti’s survey, 70% feel that using chip security versus a magnetic stripe will be more secure, while just 4% feel it will be less secure.

“While there is growing adoption of mobile payments through various technologies (NFC, MST, etc.), there is no clear ‘winner’ in this space,” writes Protiviti in its report. “As the sector evolves, we must understand how each player addresses each of four key cornerstones: security, ease of use, ubiquity and business model.”