Subscribe Now Get The Financial Brand's FREE Email Newsletter
Today’s consumers are WiFi-enabled, socially connected and tethered to their mobile devices. They want control over their finances, delivered in the form of effortless, instant interactions that don’t interrupt their lives. And consumers that utilize digital banking channels are more likely to adopt other financial products. A study from Fiserv shows that marketers will find fertile ground targeting this audience.

Now in its 13th year, the Fiserv “Consumer Trends Survey” is one of the longest-running consumer studies in the financial industry. The survey delivers insights into consumer attitudes and behaviors for digital banking, and makes recommendations on how financial institutions can capitalize drive adoption, satisfaction and growth.

Respondents in the study were segmented by various digital banking behaviors, and the data analyzed accordingly. These segments include:

Consumers clearly value the role these digital services play in helping them to manage household finances. For example, more than half of online banking users say a reason they use the service is because it “helps me keep track and manage my household finances,” while 57% of those who receive bills electronically through their financial institution say the same thing. And mobile banking users who access via smart phone cite the ability to access their bank account from anywhere as the top benefit of the service (73%).

83% of consumers believe that receiving and paying bills is a pain in the neck, requiring somewhere between a medium-to-high amount of effort (i.e., it’s a tedious chore). What concerns them most? Missing due dates and making late payments. In fact, 36% confess they’ve paid a bill late because they had problems managing their cash flow.

For example, users of online bill pay use an average of 33% more services than non-users while bill pay services are associated with significantly higher rates of savings account and credit card adoption. In addition, eBill is one of the strongest predictors of revenue generation, with recipients having an average of 1.3 more services than customers who do not use online banking.

The implication is that users of digital banking and payments are among a financial institution’s most valuable customers. Use of these services often predicts the use of other revenue-generating services and offers a critical opportunity to deepen relationships with customers. 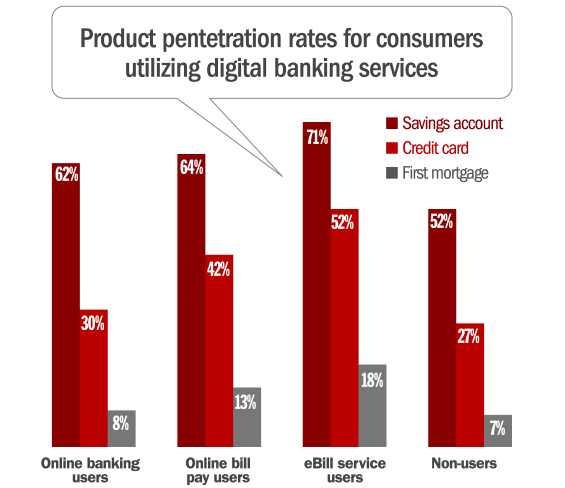 The findings also suggest that mobile banking use is driving adoption of other services, include credit and debit card use. In fact, mobile banking options are actually driving the increase in credit card and debit transactions. This is evidenced by Fiserv’s findings, where 60% of credit card users and 66% of debit card users reported that they have increased transactions because they can make payments using a mobile device.

Online banking usage is high, with the customers accessing accounts through online banking an average of 10 times per month. Nearly one quarter (24%) of users access their accounts every other day or more.

1. Cross-sell services to current customers with high potential. Understanding consumers’ motivations and preferences for digital financial services provides an important basis to help financial institutions drive adoption and strengthen relationships with consumers. For this year’s survey, Fiserv used the data to create an index of cross-selling opportunities. For instance, the use of online banking and bill pay was indexed against the presence of other revenue- generating services. Users of online banking are 53% more likely to have overdraft protection, and 62% more likely to hold investments with their primary institution. 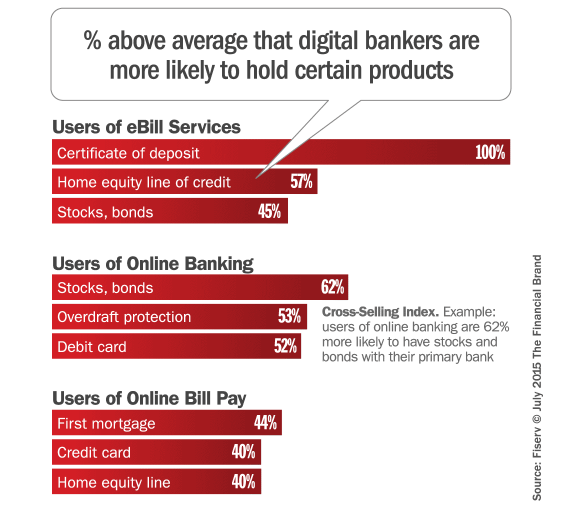 2. Drive adoption through marketing and education. To those of us working in the financial industry, it seems improbable that anyone could still be confused about services like online banking — it’s been around now for over a decade. But there is a significant opportunity to better educate consumers on how eServices work. For example, 25% of those who are not interested in online bill pay say it is because they don’t want payments automatically withdrawn. This suggests significant confusion since bill pay does not require automatic withdrawal. And in a previous Fiserv study, 40% of check users said some billers only accept checks, but they were not aware that online bill pay does not require billers to accept electronic payments. Among those who say they are not interested in using mobile banking, the majority (52%) say they don’t use the service because they are concerned about the security of their financial information. It is hugely important that financial institutions focus on educating consumers about their mobile security features.

3. Consumers desire an on-demand, just-in-time experience. Same day posting of online banking transactions is the most desired enhancement for all respondents. Similarly, Millennials want same-day posting of electronic bill payments and the ability to view bills electronically on their smart phones. Given that many people are living paycheck-to-paycheck, the popularity of these desired enhancements do not come as a surprise. In mobile banking, security alerts, bill reminders and balance alerts were all among the enhancements smart phone users hope to see. Likewise, the addition of identity protection services is among the most desired enhancements to online banking. If your institution provides services like these, you should emphasize that fact in your marketing.