Subscribe Now Get The Financial Brand's FREE Email Newsletter
Any technology changes — from system updates to major core conversions — can be hugely disruptive, with the potential to become full-blown CX disasters. Financial marketers can play a key role in managing relationships through these turbulent times. Handled correctly, they even present opportunities for growth. Strong and organized outreach, before, during and after the change is key.

“During a conversion, your best customers become your competitors’ best prospects.”

System conversions and upgrades ultimately have to come out right, but all too often financial services leaders see technological change chiefly as an IT matter. To the degree they see risks, they tend to worry most about costs and execution — having a seamless tech changeover.

A major risk that’s often glossed over is the potential for losing accounts. When people have trouble because of a system change, they can grow angry enough to switch to a new provider, either by making more use of an alternate account, or actually closing their account and taking their relationships elsewhere.

Over time, Connelly says attrition rates resulting from a bumpy or botched system change can become costly. He’s seen cases where as much as 40% of accountholders have either left leave or drastically reduced the scope of their relationship. Compounded, this can mean tens of millions of dollars of future opportunities never materialize, all because of screw-ups with a system change that leaves a bad taste in people’s mouths.

If (or more likely when) word of the problem spills out on social media, the resulting reputational damage is incalculable and long lasting. Connelly says a contact at one large bank told him that consumers still bring up a rocky conversion that occurred four years ago.

The bottom line? No institution wants to be embarrassed with a brand-bashing #hashtag.

Financial institution conversions have a rough track record, frequently producing low ratings. Connelly says it can take a year or more for satisfaction ratings to recover, even if things go relatively smoothly. Even when changes make for a net positive, people generally don’t like change. Connelly, a tech veteran, described approaches that can help institutions make things go more smoothly all through the process.

Chances are better than even that financial marketers will face such challenges soon. In a poll, three out of five financial institutions report that their institution was planning a conversion or upgrade in the near future. Other change events, such resizing branch systems or M&A, can pose similar challenges.

Unfortunately, when a banking provider undergoes a major conversion, management anticipates an increase in customer service calls and other handholding at the contact center. Connelly says this often means that additional staff is brought on and trained for the duration of the changeover to help handle this potential flood.

Reality Check: If your call center receives droves of calls after the switch is flipped, and is handling them, that’s not a victory. Connelly says winners engineer their conversions so those calls never come. Financial marketers have a key role to play in this effort.

“If a customer has to call your institution to solve the problem, then you are already in the hole,” says Connelly. “Remember, conversion was never your customer’s idea.”

On the other hand, conversions can also become strong promotional opportunities, which the webinar also addressed.

Proactive — and frequent — outreach to consumers and businesses that will be affected by a conversion can make a major difference in the immediate reaction to a change and the ongoing evolution in how an institution’s public sees the conversion.

“A conversion should really be viewed as a massive onboarding initiative,” Connelly explains.

This means financial marketers assigned the task of handling communications need to understand two key elements of the conversion process. The first is informing the institution’s base that change is coming and getting people and businesses ready for it. It’s helpful, says Connelly, to think “mass onboarding” but strive to make it feel very individualized, one by one. The second task of the marketer facing a conversion is to help consumers and businesses become accustomed to using the new system.

Getting the job done right will prove more time-consuming and more challenging than most first-timers in the conversion process expect. Connelly tells the story of an institution undergoing conversion that mistakenly believed sending out a series of just four mailed letters would be adequate outreach. Thinking in stages or waves like that is appropriate, because there are multiple times the institution should make contact. However, four mailed letters is only the beginning, and does not make a complete communications program.

Connelly explains that the more proactive a bank or credit union can be, the better. It will make the right impression on both consumer and business segments, and it will ensure that something eventually makes it through to those among them who aren’t inclined to read letters vs. emails (or vice versa) — at least not the first time they are sent. Always remember: Emails can get lost in spam and overloaded inboxes, letters often get tossed without reading.

“About the time you get bored to death of sharing conversion news, that’s when someone’s likely to finally ready to hear it,” says Jim Marous, Co-Publisher of The Financial Brand and Owner/Publisher of the Digital Banking Report.

A key goal of all outreach is to not only let people know conversion is coming, but help them cope. Multiple types of outreach should be offered to best fit different groups’ preferred means of learning, according to Connelly:

No matter the medium, conversion communication works best when it is centralized, according to Connelly. There is a temptation to think that staffers closest to consumers and businesses can best handle this mission. But Connelly says this will lead to inconsistent results — one branch may take the job very seriously, another may not.

On a related point, Connelly warns against giving the communications job to staffers whose usual job is working with consumers and businesses. They have a day job and adding more to their plate will result in neither getting done right. Dedicated conversion specialists, detailed from within the bank or sourced through a vendor like Harland Clark, can devote full attention to the job, according to Connelly. 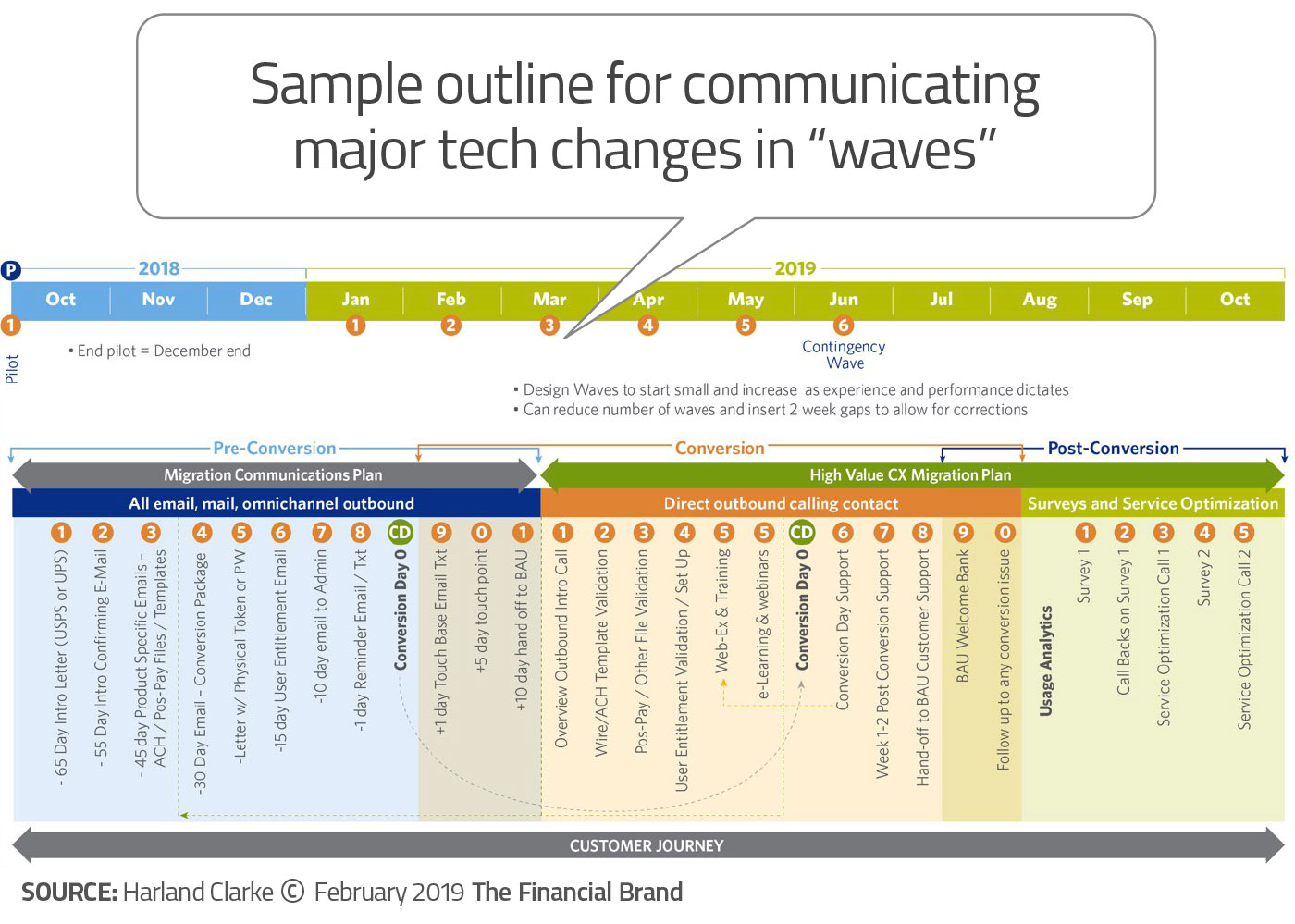 An outline of a communications strategy for tech upgrades and system conversions (shown above). A full-size version of this graphic, with narration, can be found in the Harland Clarke webinar. You can also click on the graphic to enlarge it.

A key best practice is dividing consumers and businesses that will be affected by a conversion into tiers. The higher the tier, the more frequent and more detailed the outreach. Groups may be prioritized based on number of relationships with the institution, overall profitability, the account’s complexity, or, in the case of businesses, the industry, for example.

For the highest tiers, “your people are going to actually call them up and say that they are going to help them through the conversion,” says Connelly. In general, “the higher the tier, the more touchpoints you’ll offer.”

Customized messaging will help both consumers and businesses feel that they are receiving appropriate attention as the conversion nears, and thereafter. 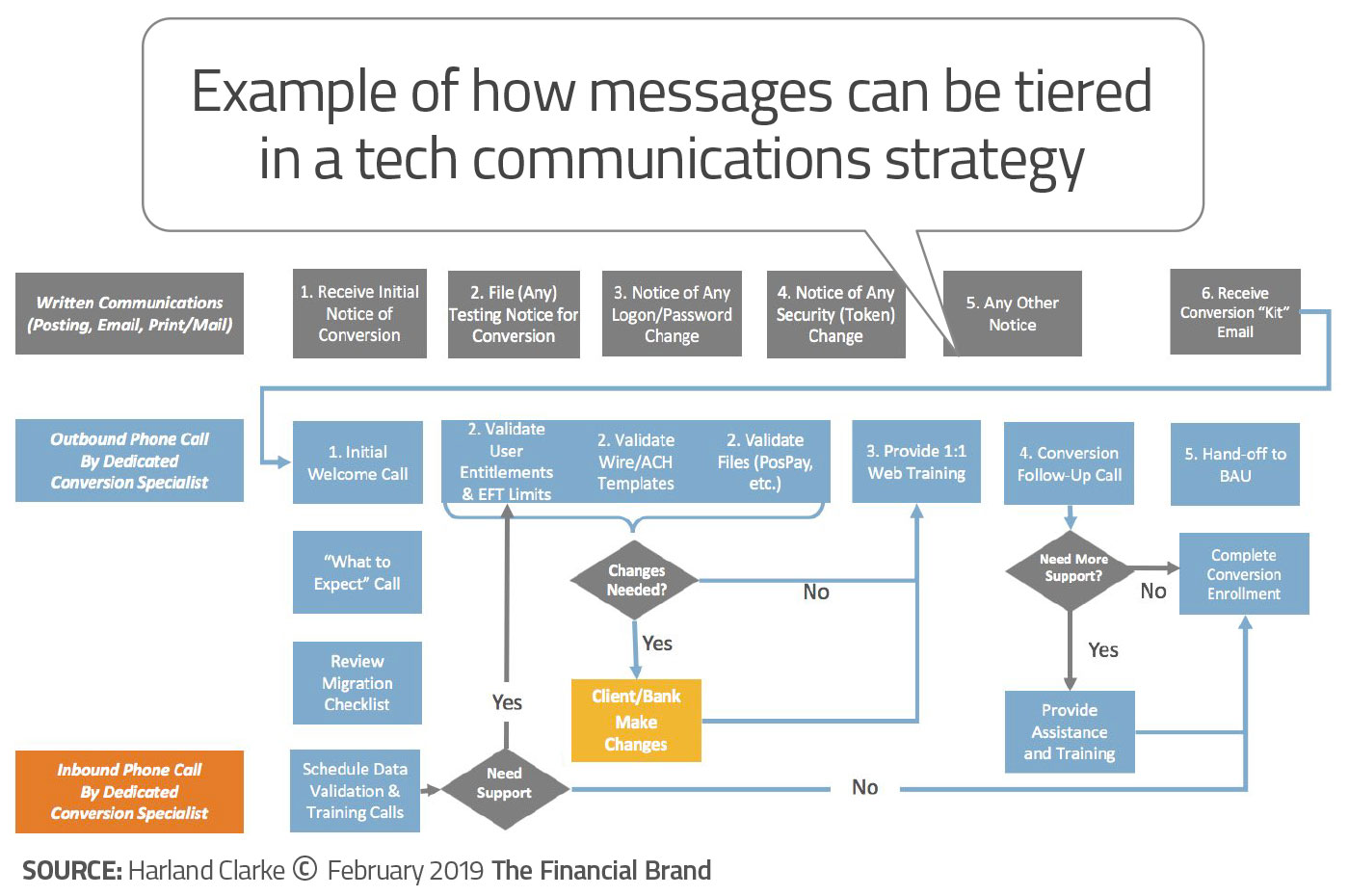 The temptation will be to breathe a sigh of relief after conversion is complete, but Connelly says the task of communicating isn’t over yet, by a long shot.

If things didn’t go 100% according to plan — and when do they? — there will be follow-up, including handling numerous calls. The institution has to ensure that sufficient resources are available to handle complaints and inquiries.

Outbound calling after the changeover sends a strong message to consumers and businesses — and in general the institution can expect to be handling aspects of changeover communication for a couple of months after the event.

But the task doesn’t really end there for the smart players, according to Connelly. Follow-up surveys among consumers and businesses will tease out frictions and issues in the changed system that could dictate fresh development, additional outreach, and other remedial steps to help the conversion keep moving forward. Surveys will also give the institution a good feeling for how well the communications effort went from the start.

Jim Marous says there is a potential bonus for institutions that take pre-conversion outreach seriously. It’s a chance for the bank or credit union to talk to consumers and businesses that may not have had any communication beyond monthly statements with the institution for years.

“This is a very good opportunity to cross-sell,” says Marous. “There’s usually a very good conversion rate. They will tell you what they are not happy about with their financial situations.” He says institutions can become so embroiled in technology aspects of the changeover that they neglect ready opportunities.

Handled properly, outbound conversations can enable customers to answer questions about other services that they may not be using, or using to their fullest, says Connelly. It’s not unusual, he says, for outreach staff to hear reactions like, “I haven’t talked to my bank for eight years.”

Reactions like that help fuel favorable feelings post conversion, according to Connelly. Even if things don’t go perfectly, the institution that works at communications has a better chance of leaving people with a favorable impression.