Subscribe Now Get The Financial Brand's FREE Email Newsletter
This mammoth study shows banking providers are making modest customer experience gains. However, the impact on the bottom line is negligible. They may be getting more love, but not much else.

Strategies that banks have traditionally employed to attract and retain customers aren’t working as well as they once did, according to the 2016 World Retail Banking Report from Capgemini and Efma.

This global survey of consumer attitudes toward retail banking included over 16,000 participants in 32 countries, making it one of the biggest in the financial industry. The survey sought to assess consumer preferences, expectations and behaviors, and examined their general satisfaction with various banking channels. The survey also questioned customers on their likelihood to stay with, refer, or purchase another product from their banking provider.

The good news? Financial consumers reported growth in positive experiences through every channel, with mobile quickly catching up with the internet and branch channels. Globally, banking providers improved their customer experience, with gains in more than 85% of the 32 countries surveyed… but often by only a wee bit.

The bad news? Unfortunately, these overall improvements did not translate into tangible results in profitable customer behavior, such as retention, referrals and cross sales. People may be more satisfied with the overall banking experience, but not enough to translate into greater profits for banking providers. 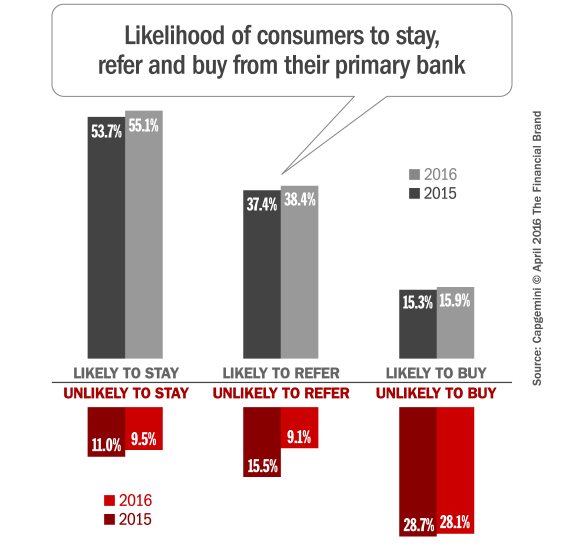 A little more than half (55.1%) of financial consumers globally said they are likely to stay with their banking provider for the next six months. Across all markets, only 38.4% of respondents said they would refer their bank to a friend or family member.

Especially striking was the finding that only 15.9% of all respondents said they would buy additional products from their banking provider. That makes the prospects for cross-selling look pretty weak.

Unsurprisingly, financial consumers who had positive experiences were significantly more likely to have higher trust in their primary institution (71.0%), versus 32.0% of those with negative experiences.

In the Capgemini study, Millennial and Gen X consumers emerged as areas of particular concern. The lower customer experience scores they give banking providers raises questions about the ability of traditional institutions to meet the higher expectations of these important segments.

Changes in Channel Usage and Expectations

Mobile is gaining ground, becoming the second-most-used channel after the internet. One-third of all consumers say they use mobile banking at least weekly, up by 2.8 percentage points over the year prior. Additionally, those saying they associate a positive experience with mobile increased by 6.5 percentage points in 2016 to 55.6%.

Usage of branch and Internet channels declined as customers began opting for the convenience of banking via smartphones. While the internet remains the most popular way consumers access their bank — and by a wide margin — usage has decreased from 65.1% in 2015 to 59.4% in 2016. Branch usage is also down by 3.2 percentage points.

Though they are changing how they use channels, customers still derive value from each one, and for different reasons. Every channel experienced a substantial increase in positive experience, with the branch gaining the most (7.2 percentage points), putting it at 60.7%, just behind the internet at 63.8%. These numbers underscore the fundamental role the branch continues to play in customer experience.

“Consumer expectations are augmented by the superior experience they encounter with technology in their day-to-day lives,” explains Anirban Bose, Head of Global Banking and Financial Services, Capgemini. “Consumers expect much more in the way of innovation, but are not getting it from their banking providers.”

The Capgemini report stresses that transforming legacy systems with more agile and scalable systems that provide a 360-degree view of their customers will be essential. 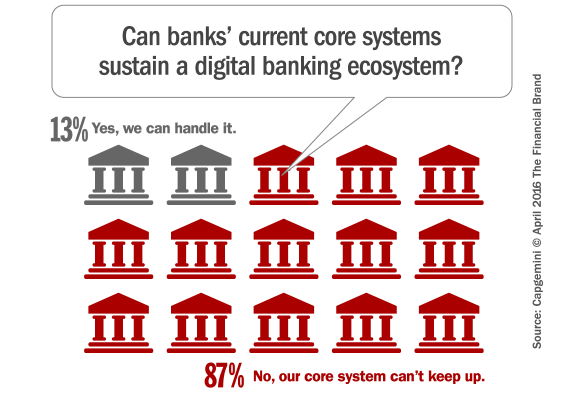 Ease of use, fast service and a positive customer experience were all cited by consumers as advantages fintech companies held over banks. In the study, fintechs are showing gains in adoption, referrals and trust.

Banks view trust as their greatest strength, and they score higher for trust than fintech players. But fintech firms are quickly catching up, with the percentage of customers who “completely” or “somewhat” trust a fintech provider swelling to more than 88% across all regions covered in the study.

Retail banking providers have cast a wary eye towards fintech players for some time now, but the study reveals just how vulnerable they now feel. The vast majority of institutions in Capgemini’s research said they aren’t adequately prepared to respond to the possible threats they might face from fintech players. Less than one quarter of respondents said they feel like they have an advantage over fintech firms in terms of agility or ability to innovate.

“The inability of banks to innovate leaves the door wide open for fintech providers to attract new customers,” cautions Capgemini’s Bose, who authored the report. “There is opportunity for banking providers to begin working collaboratively with these companies, but they must formulate a rapid response plan to do so before the swiftly evolving bank environment outpaces their window for change.”

The Capgemini report suggests traditional institutions rip a page from the fintech playbook, and evolve towards a digital banking ecosystem. They need to honestly assess their existing customer experience, and determine the impact that improving that experience might have on the bottom line. At the same time, they need to be realistic about the true level of influence and “disruption” fintech players represent. How deep and wide is this threat? From there, traditional institutions can plot their strategy and decide how they want to respond. Should they try to quash fintechs? Ignore them? Or invite them in as business partners?