Subscribe Now Get The Financial Brand's FREE Email Newsletter
Tailoring mobile banking apps means not only customizing what consumers see on their screens but also how the software underneath it all adapts to what users need and the financial tasks they are performing. A surprise in new research is that mobile web usage, once written off, remains important and is getting renewed emphasis from major banks.

Mobile banking apps continue to grow broader and deeper, fulfilling more and more of consumers’ financial needs and convincing a growing number of them that most of the time all they will need is their app. However, the more comprehensive the apps become, the more consumers need a way to get their arms around this digital relationship.

Personalization of app features is becoming the key to making an increasingly complex product work well. It encompasses many aspects of apps.

The personalization and customization of how an app displays information and the most important links for each customer require a balance between ease of use and ease of customization. On one hand, this can entail quick linking to the most common tasks for the consumer, giving savings goals prime display position, and similar visual factors, according to Susan Foulds, Managing Director at Keynova Group, reflecting on a study by the firm. On the other hand, it helps to make user-driven personalization reversible if they overcomplicate things.

The BMO Harris mobile app, one of those studied, allows the user to choose three “Quick Action” tiles on the home screen at all times. Alternatively, with a single tap the user can switch to a screen that provides links to all of the app’s quick links.

Truist’s mobile app not only permits users to customize the app dashboard but also provides a link to personalized insights that the app can serve up.

Beyond What You See:

Mobile app personalization increasingly goes deeper than the dashboard, to the software driving the app.

“It can involve an app being more proactive in providing financial insights,” says Foulds. “It can mean providing more predictive information, such as a warning that I won’t have sufficient money in my account to cover an upcoming payment. All of this rolls into personalization.”

The place where personalization first shows itself is on the mobile app’s dashboard. Keynova’s Mobile Banker Scorecard study, which reviews the mobile apps of BMO Harris, Truist and 15 other major banks, found that in its 2022 Q3 study 41% of the institutions give users the option to personalize their app dashboards. That’s up 11 percentage points from the year earlier study.

“When mobile banking apps first started coming out there was a trend towards ‘one-size-fits all’ thinking,” says Foulds, “and things just don’t work that way.”

A key form of personalization are the types and numbers of alerts that consumers can specify in their apps. The increasing breadth and sophistication of apps means that customers can be receiving a steady stream of warnings, updates and advisories that, unchecked, can become as welcome as buzzing mosquitos on a summer night.

“People don’t want to be inundated with alerts they don’t want, so this type of information should be personalized,” says Foulds. Security alerts, involving fraud and other risks, would be an exception, she continues. It’s proactive for the financial institution to push those out.

Keynova maintains app-linked accounts with each of the 17 institutions that it studies, in order to study them “live.” A yellow flag from Foulds is a lack of timeliness observed among some banks when they provide alerts. She says that some institutions send alerts that arrive in the morning, for example, though the trigger event for the alert may have occurred the previous day.

“Real-time alerts are essential. They should be arriving within 15 minutes or so of the event.”

Tailored insights for each app user are a key way of increasing the value of an app to consumers, according to Foulds. U.S. Bank, which ranked #1 in the study overall for the third edition in a row, displays a summary of savings goals on its app dashboard.

Offering customized responses on the fly is another growing aspect for mobile banking apps, according to the report. U.S. Bank’s Smart Assistant feature, for example, presents options based on the task that the consumer is in the midst of executing.

An important shift among providers tracked by Keynova’s studies is towards maintaining bank’s mobile web presence instead of abandoning them in favor of the apps. “Mobile web” refers to access to banks’ websites via mobile devices, which can take the form of a more mobile-friendly version than would be seen on a desktop or laptop computer.

Foulds says that as the popularity of mobile banking apps grew, some institutions believed that mobile web wasn’t important.

“Some even decommissioned their mobile web presence,” says Foulds. “But now they’re back to optimizing the browser-web experience for mobile devices so that they are synched or aligned with their online banking services.”

Elaborating, Foulds says that even as they grow in functionality and breadth, “apps still don’t necessarily provide all of the self-service capabilities that consumers may require.”

The firm reports that Citibank, Huntington, TD Bank and USAA are among the institutions that are rebuilding their mobile web.

Part of the impetus for this came about as a result of the pandemic, as people began doing more of everything on smart phones and tablets.

Mobile web enables people without access to a computer, either at some point or at all, to tap all of the bank's digital services. This includes those that are still not available on a bank's app.

Even now, many consumers find a larger screen easier for handling certain tasks, so they will still use their computers for them, says Foulds. “However,” she adds, “if you are not that user and you just need to change your address and you can’t do it through your app, then having the mobile web alternative is important.”

One customer-friendly trend that Foulds has noticed is greater use of plain language, in place of banking jargon, in mobile apps. She says this reflects the influence of fintech and neobank apps, such as Chime’s, which frequently rely on plain English.

When a Mobile Banking Customer Still Needs a Person

Foulds says that many institutions put so much emphasis on their digital channels that they don’t account for the fact that for some people the answer to a concern or question encountered while using a website or an app may require human intervention.

Bank digital channels still aren’t up to the level of performance of sites like Amazon, says Foulds, where human interaction is rare.

“Sometimes you need a blended option, digital and human,” says Foulds, “where you need live assistance. It may be delivered through chat, but even that can be a bit time-consuming for customers who have a complicated situation.”

Foulds suggests making help line phone numbers obvious within both websites and mobile banking apps to enable people to quickly get human help. She also suggests not sending consumers to a complicated interactive voice response menu, but to a number that enables them to reach a human relatively quickly.

She notes that three of the institutions studied — Citi, M&T Bank and U.S. Bank offer some form of video conferencing. Huntington and PNC offer app users an option to be called back within a short time frame if they have a question or problem.

One of the conundrums for consumers new to a mobile banking app is that for the most part there is little to guide them beyond a list of features and the static screen shots of various functions as seen on the App Store, Google Play and the bank’s website.

Foulds notes that four institutions offer detailed interactive or guided tours of their mobile apps on their websites. These include U.S. Bank, Citizens, BMO Harris and TD Bank.

In the following examples, drawn from the latter two banks, a sampling of the screens seen in the tour are shown, rather than every step, in the interest of space.

TD Bank offers a screenful of specific features that can be toured. 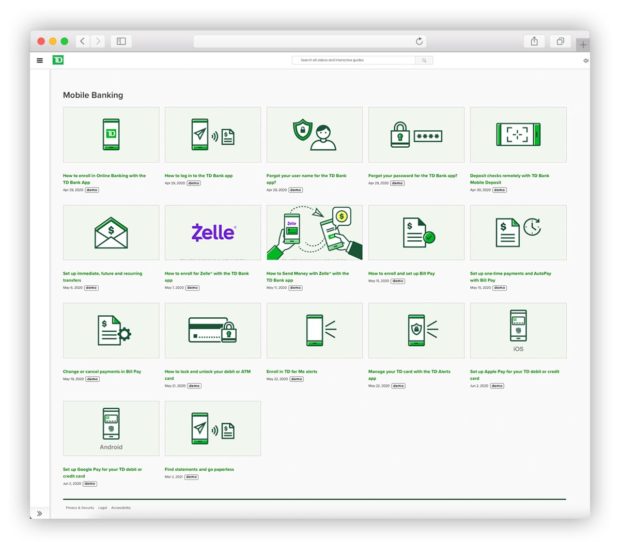 The four screen shots below come from TD Bank’s interactive demonstration of how to load a card through a digital wallet. As the user interacts with the sample screen, the site advances to the next. Each screen is accompanied by an explanatory bubble. 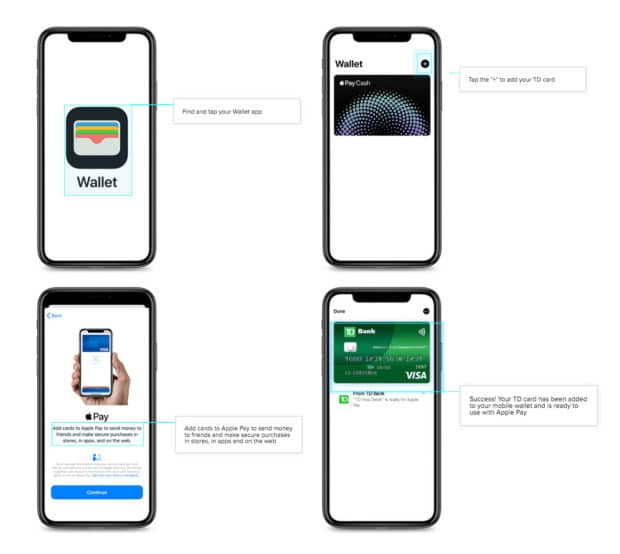 BMO Harris similarly begins with a menu of possible demonstrations. The demos feature the optional ability to use a pulsing guide to the proper screen button to push. The user proceeds as if the transaction were live. In the example below, the bank’s app can be used to instruct certain ATMs to dispense cash. This includes guidance on how to shoot an ATM’s QR code via the app.

At present, this is the only way consumers have to personally “kick the tires” on a handful of major bank apps.

Foulds says people used to shop for a new bank and would sometimes visit a branch to see if it had the right “feel,” on top of the services offered.

“They really should have some opportunity to be able to see what’s available on a bank’s mobile app or online banking,” says Foulds. She thinks small businesses would also find this helpful for commercial mobile banking apps.