Early in 2009, Australian banking giant ANZ began quietly but methodically rolling out its new brand identity. There was little fanfare when a new ANZ logo popped up in an Indonesian airport last April. But when the bank debuted its new identity on its home turf later in the year, Aussies started taking notice, including many in the design community who lambasted ANZ’s new symbol as “dreadful.” Now after all the dust has settled, The Financial Brand takes a look at why and how ANZ decided to undertake its branding initiative.

ANZ’s growth strategy hinges on the wider Asia Pacific region, believing the bank’s future lies beyond the shores of Australia and New Zealand.

But, according to ANZ, the bank’s brand had become “fragmented and not consistently leveraged across all customer touch points and messages.”

In strategy documents provided to The Financial Brand, ANZ says it rebranded in order to look like “one bank,” and “provide a consistent experience for people wherever they come into contact with the bank.”

“A strong, unified brand across all our geographies is an important part of our future growth,” Smith said in a press release.

At the core of the brand strategy is a promise that is — quite literally – “simple”:

ANZ says “Uncomplicated Banking” is about delivering products and services that are convenient, simplified and straightforward. But ANZ says “uncomplicated” doesn’t always mean “simple.” “Certainly, our customers don’t want their experience with us to be any more complicated than it needs to be,” the bank explains. “But ‘uncomplicated’ means different things to different audiences. In every case, we listen and use a language they can understand.”

ANZ spent 18 months developing the strategy, including research with branch staff and customers in China, Vietnam and Australia.

“We talked to more than 1,300 customers and 250 staff around the Asia Pacific region,” the bank said. “Despite differences in culture, geography, language or business type, they all said they wanted a bank that was two things: uncomplicated; and focused on people.”

ANZ describes its vision of a “people-shaped” bank as “one that shows respect and understanding for its customers.” The bank has tied its core values to align accordingly:

Rolling the Lotus Out Slowly

ANZ’s most significant change to its brand identity was a redesigned logo. ANZ simplified the typography and adding a symbol, something the bank calls a “lotus.” ANZ describes its lotus as “a symbol of unity and growth relevant to customers regardless of differences in language and culture.”

“The symbol provides another way for staff, customers and the community to recognize and connect with ANZ and what we stand for,” the bank says of its lotus. “Especially in regions where the name ANZ is not yet well recognized, or where non-English characters are used.”

ANZ doesn’t feel any particular pressure to rush the brand identity change-out. The new brand will be rolled out in stages over the next year or two. ANZ says it will “contain costs by linking to business-as-usual upgrades.” ANZ has already switched signage on buildings, branch collateral, corporate stationary, advertising and online.

The Financial Brand’s first article about the new ANZ logo in the Spring of 2009 didn’t receive much attention until the bank debuted its new identity on its home turf later in the year. Then in the fall, a flood of Australian designers and financial marketers descended on the story, viewing it over 2,850 times and making the article the #2 most-read on the site last year.

ANZ expects the initiative to cost AUS $15 million in 2010, claiming the cost does not represent a significant increase in marketing expenses.

The rebranding effort also marks the first global advertising campaign for ANZ. In Australia, the campaign consists of TV, print and outdoor ads, and in-branch materials.

As part of its branding process, ANZ looked at the ways it was already making banking uncomplicated, and came up with it calls some “Initial Proof Points.” Among some of the products and services recently introduced by ANZ:

But ANZ also recognizes its ‘Uncomplicated Banking’ strategy raises expectations beyond what the bank is currently delivering.

“Really delivering on our new brand promise to our customers and staff is an aspiration,” ANZ explains. “We have made some good progress but we still have a long way to go.”

The bank’s strategy calls for “additional proof points” and “future initiatives in 2010.” Some of ANZ’s other recent and planned initiatives include:

Key Takeaways: Average brands are built around what the organization can already deliver today. Breakthrough brands are built by living out the brand to its fullest potential. You will never maximize the opportunities lurking within your brand unless the entire organization makes changes. It takes time, energy and money. 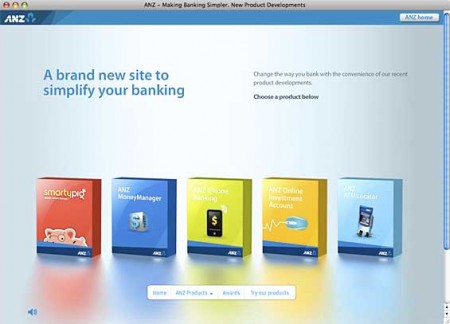 ANZ New Product Developments
A subsection of the main ANZ website detailing some of the bank’s recent product and service launches.

ANZ – “UNCOMPLICATE”
In this one-minute TV spot, ANZ shows a whirlwind of digital and financial information swirling above everyone’s heads. The announcer says, “Have you noticed how everything that was supposed to get simpler, somehow got more complicated?” He then asks, “How do we know you want simpler banking?” The answer is offered in the bank’s slogan, “We live in your world.” 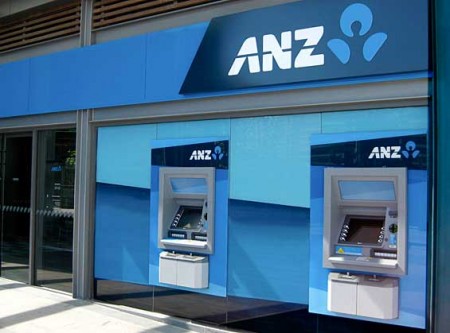 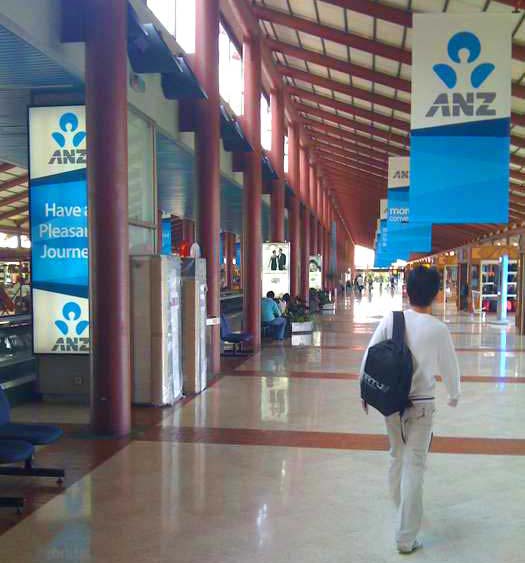 NEW LOGO – INDONESIAN AIRPORT
ANZ started introducing its new logo in its outer markets before rolling it out in Australia.