Someone feels they’ve been mistreated by your financial institution. They’re pissed off, so they launch a hard-hitting online vendetta against you, centering around a new blog or website. They pull no punches, bitterly and ferociously ripping into you. They keep pushing your buttons trying to get a response. If/when thtey do get a rise out of you, they push even harder.

This kind of situation has become an increasingly common phenomenon in recent months. Standard Bank in South Africa has been contending with a former customer taking them to task in blog posts and on Twitter since July 2009. The vendetta was launched with this tweeted declaration: “We’re putting Standard Bank in the hot seat, holding them accountable for abusing customers!”

Priority One Credit Union has been under attack from an obsessive blogger since January 2009. This person (possibly a former employee) has written some 90 blog posts. That’s an average of one every four days. Some are over 2,000 words long.

Then there’s Navy FCU. Someone name “Chris” claiming to be “a happy and loyal member” before “things changed” has been hammering away on the world’s biggest credit union with his blog, navyfcusucks.com, and a Twitter account, @NavyFCUSucks. 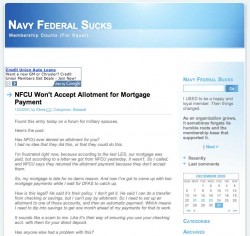 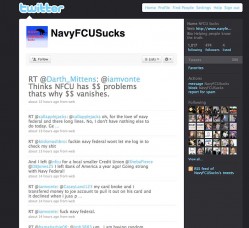 NAVY FCU SUCKS
A blog (left) with a number of articles critical of Navy FCU bears the slogan, “Membership Counts (For Squat).” At the NavyFCUSucks Twitter stream (right), you can find almost everything negative that everyone on Twitter has said about the credit union.

And just about every major bank in the world has a “[Brand Name] Bank Sucks” fan page on Facebook. Just take a look for yourself.

These kinds of nightmare scenarios make financial institutions wonder what they can do. “Can we prevent this kind of online vendetta by cybersquatting [ourbank]sucks.com?”

For starters, it’s impossible from a practical perspective. A scorned customer/member/former employee will be able to find some available combination of derisive terms for their blog’s URL. There’s yourbanksucks.com, yourbank-sucks.com, your-bank-sucks.com, boycott-your-bank.com, etc. There is an infinite array of options one can come up with that require only a juvenile level of creativity.

Someone can always launch a blog at a free, third-party service like Blogspot or WordPress, using URLs like yourbanksucks.blogspot.com or yourbanksucks.wordpress.com. This is a much more likely threat, because not everyone is willing to pony up the money to pay for a domain name and hosted internet server (around $100 per year).

The problem compounds exponentially when you start looking at all the social media platforms one would have to cover: Facebook, MySpace, YouTube, Twitter, etc. It’s simply too tedious and time-consuming to run around the web cybersquatting all these names that might possibly be used against you in a future attack.

Key Question: What will people think when they perform a search at their favorite social media sites and see all these harsh and negative names?

This is precisely what concerns Jason Kincy, VP/Alternative Delivery Manager for Arvest Bank. “I don’t like squatting and allowing customers to view them in searching for your company,” he says.

Reality Check: You can’t secure all the possible combinations and cybersquat your way out of an online attack. Trying to reserve even the most basic, obvious combinations would be extremely tedious. There are just too many. You can’t cover them all.

As Brent Dixon with Filene, a credit union think tank, puts it, “That feels like an exhausting, neurotic thing for a person to do.”

Indeed, no one bent on revenge is likely to give up simply because their first choice for a URL — [yourbank]sucks.com — isn’t available.

The truth is, there is no fool-proof defensive countermeasure that will thwart possible online attacks. You can provide the greatest customer service on earth, and you may still be unfortunate enough to run into someone who has the time and energy to point out your failings (real or perceived).

Reality Check: If someone wants to initiate a vendetta bashing your financial institution, there’s really nothing you can do to stop them. Someone w/a score to settle will find a way to launch their attack.

So What Can We Do?

Most experts on social media agree that you should try to reconcile differences by engaging with the upset blogger.

“Learn to be better at dealing with conflict, rather than earmuffing it and hoping ignorance will work,” advises Filene’s Dixon.

William Azaroff, head of online strategy for VanCity, a large Canadian credit union, has a number of good tips for how to best tackle angry bloggers. Read his excellent blog post about monitoring your online brand health, then check out this companion presentation, “Responding to Bloggers”:

One thing to consider is to simply invite the begrudged person to have a cup of coffee. If they are a rational, reasonable person with a real grievance, you can give it a try. If your only publicly published response on the internet is an invitation to “sit down and talk,” it will at least look like you’re trying to take the high road and make amends, even if your offer is rejected.

Remember, you’re dealing with people’s emotions. These people feel you hurt them. They probably feel unimportant and disrespected, as if they weren’t worth your time. Think about how you can address these feelings, and not just resolving the financial transaction that triggered their ire.

The good news is that if you can resolve the issue, there’s a very good chance that this person will flip from a “brand detractor” and turn into a “brand advocate.” Many times, people judge brands (just like people) by how they perform during their darkest moments. The same person who was once willing to rant about your ills yesterday may also be the same person to extol your virtues tomorrow.

As difficult as it may seem to find anything positive in these situations, just keep in mind that you may be able to turn a sour lemon into some great PR/word-of-mouth lemonade.

Reality Check: Sometimes, there is simply no way you can win.

Some people are bullies, where anything you say can (and will) be used against you. Others are plain old nutjobs, and there is nothing you can do to stop them. Don’t bother engaging with people who are downright nasty or suffer from psychosis. It’s a waste of energy.

Once a blogger has moved past their own complaint and begins adopting/echoing the grievances of others, or looks for new things to bitch about, their vendetta has taken on a life of its own and your opportunity to reach-out has probably vanished. In such cases, it may be best to just wait it out, and hopefully the blogger will someday give up or go away.

Whenever someone launches an online attack against your financial institution, you should always consider talking to your lawyers. Seek their counsel and keep them informed. If the blogger ever crosses the line with libelous comments, don’t be afraid to slap a lawsuit on them. It’s your legal right to defend your reputation when people lie about you.

The Financial Brand has learned of at least one situation where lawyers were called in after months of abuse from the virtual pen of a jilted former employee. The financial institution’s lawyers fired off a letter full of scary legal terms and the website was turned off — immediately. Sometimes, “engagement,” “dialogue” and “joining the conversation” aren’t the best ways to deal with big brand problems on the social web.