Subscribe Now Get The Financial Brand Newsletter for FREE - Sign Up Now
Legacy organizations will be displaced if they don't self-disrupt, according to the author of the best-selling book, The Innovator's Dilemma. The lessons on innovation theory and transformation presented by the late Clayton Christensen should be required reading for all financial institutions.

Anyone who has read The Financial Brand articles I write, listened to my Banking Transformed podcast, or have seen me speak at events knows that I believe that the only way for financial executives or the banking industry to move forward is to ‘disrupt themselves’. The term ‘disruptive innovation’, as it relates to business, was first coined by innovation guru Clayton Christensen in a Harvard Business Review article in 1995, followed by his 1997 book, “The Innovator’s Dilemma” and many subsequent works.

While Christensen was not without detractors or valid challenges to his theory, I often read his writings as a ‘lesson plan’ to help provide guidance to financial institutions struggling with change or innovation. Just as importantly, he often argued about the difference between ‘radical sustained innovation’ and ‘disruptive innovation’. Unfortunately, Christensen passed away Jan. 23, 2020 after a long battle with cancer.

While many refer to disruption as a departure from business as usual, Christensen argued that established companies have challenges innovating because they focus too much on what had made them successful in the past. He further surmised that start-ups benefited because they didn’t have that legacy, therefore allowing them to view the future without holding on to the past.

His theory described how an innovation can transform a business or industry. Here are some key excerpts from “The Innovator’s Dilemma” that can prove helpful to any business … especially financial services.

“What all sustaining technologies have in common is that they improve the performance of established products, along the dimensions of performance that mainstream customers in major markets have historically valued.”

“Most technological advances in a given industry are sustaining in character. An important finding revealed in this book is that rarely have even the most radically difficult sustaining technologies precipitated the failure of leading firms.”

“Products based on disruptive technologies are typically cheaper, simpler, smaller, and, frequently, more convenient to use.”

(Read More: The Best Global Innovations in Banking for 2019)

The Foundation of Disruptive Innovation

The foundation for disruptive innovation is a marketplace that is currently served by incumbent organizations that are making ongoing, incremental product innovations to serve their customers. Because business continues to be strong, they are less likely to take risks that will disrupt the status quo.

Because of this relative complacency to the changes in the marketplace, new firms enter the market. As opposed to replicating the incumbent model across product lines, the new firm selects a single or few product lines that often have narrow margins. Because the margins are low, the incumbent usually determines that defending the turf is not a viable strategy.

The result is that the new firm captures a significant portion of the market share for the product by offering a new product, a new technology to produce the product, new ways to distribute the product or a new way to provide the service. Many times this is achieved by offering services much more efficiently than was possible in the past. In financial services, this would be what happened in payments, where fintech firms found new products, new distribution methods and brand new ways to service the consumer.

From this foundation, the new entrant expands their offering across a broader array of similar services or ancillary services. By the time the incumbent stages a defense, consumers may have already changed their buying or usage patterns and developed new loyalties. The foundation established by the new entrant provides the leverage to go after a larger share of the incumbent business.

Should Firms Cannibalize Themselves?

Whether the firm is a legacy organization, or a new entrant stealing a piece of the market for a product or range of products, there are two major options available in today’s marketplace of rapid digital change. Either a firm can become a platform for services previously offered as well as new services offered by others, or a firm can cannibalize their own legacy products.

There are many examples of organizations building robust platforms that are including financial services. Not only are high tech firms using this strategy (Google, Amazon, Facebook, Uber, Alibaba, Tencent, etc.) but also some traditional financial services firms (BBVA, PingAn Financial, etc.).

Deliberate cannibalization is a form of disruption that can create a defense against both complacency and being upended by new entrants. Many tech firms, such as Apple and Google, never stop disrupting their previous products for the potential of moving the company forward.

There are very few financial institutions willing to kill off the past to provide a path to the future. Part of the reason is because so much of the legacy organization relies on the status quo for their job security. This is compounded by the legacy organizational structure that creates silos that stifle innovation for the benefit of the consumer.

“The fear of cannibalizing sales of existing products is often cited as a reason why established firms delay the introduction of new technologies.”
― Clayton M. Christensen, The Innovator’s Dilemma: When New Technologies Cause Great Firms to Fail

Well after Christensen wrote his first book, he offered another option to organizations that suffered from the lack of disruptive innovation. He believed that moving from a short-term view of profitability to a broader financial perspective driven by continuous innovation with the objective of improved customer experiences could help legacy organizations survive. He believed that in this scenario, profitability to the result as opposed to the goal of the organization.

He offered Apple, Salesforce and Amazon as examples of firms that focused on constant innovation as a path to profitability and sustainability. The culture of innovation permeates the organization, replacing the traditional culture of cost cutting. As with the other options that were the foundation of the Innovator’s Dilemma initially, not changing the existing business model is not an option.

Innovation as a Way of Business Life

While there have been ongoing debates around the merits of what Clayton Christensen laid out in his original book and subsequent writings, it is still very valuable to dig into his teachings to better understand the challenges faced if an organization doesn’t place innovation as a top priority.

Recent findings by the Digital Banking Report in the research, Innovation in Retail Banking 2019, it was found that the most innovative banking organizations were the most digitally mature, had the greatest use of advanced technology, were most proficient at measuring results and were the most profitable. These firms also had the highest customer satisfaction ratings.

So, whether or not you believe in the findings of the late Clayton Christensen, many of the takeaways from his research and subsequent scholarly arguments should be part of every organization’s strategic planning process. 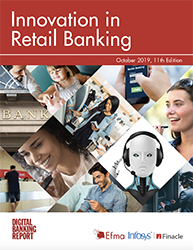 The Innovation in Retail Banking 2019 report, published by the Digital Banking Report, and sponsored by Infosys Finacle in cooperation with Efma, provides insight into the progress financial institutions are making around innovation and digital transformation. The report includes the results of a survey of more than 300 financial services organizations worldwide. The report is 102 pages in length, with in-depth analysis and 44 charts.

Subscribers to The Digital Banking Report and those wishing to download the complete report (which is available at no cost for a limited time) can access it immediately by clicking here.