Nonbank competitors increasingly dominate digital small business ‘ecosystems.’ Few traditional institutions have joined in. Left unchecked, the trend could threaten banks’ position. Improvements in small business mobile banking capabilities indicate that the industry is aware of the challenge and striving to counter it.

What small and medium-size businesses (SMBs) now expect from financial institutions and how they want it delivered calls into question the future of the many banks and the sizeable number of credit unions that specialize in business banking.

Traditional institutions have already seen how fintech lenders have grabbed a share of business lending, but the trend goes far beyond credit. How the industry responds in the next few years may determine how many institutions will survive, and in what form, experts believe.

One bright spot is that SMB mobile banking service is being taken more seriously by legacy institutions and as a result is making business customers happier than they had been. However, even there the industry has no cause for complacency.

No One in Business Does Banking for Fun

A key requirement for survival, according to the analyst, is that banks must improve their digital services for these firms or lose business customers to disruptors. A related point is that for most if not all financial institutions the idea of being a one-stop shop for these firms is rapidly fading. This evolution has been going on first gradually and then rapidly in multiple markets, and even if banks evolve sufficiently they will likely have to choose what role they can play well in “ecosystems” run by themselves, or by nonbanks, where many providers take part in a marketplace. The concept is not unlike a financial “app store,” according to Wannemacher, though much more complex.

Essential to understanding why this transition is occurring is Wannemacher’s argument that financial institutions on the whole have not applied anywhere near the same degree of innovation to the business side as many have brought to retail banking. Yet it’s become a given that executives from huge companies down to the local deli are consumers, as well as business people. And they don’t see why their personal banking apps should soar like jets while their business banking apps chug like steam locomotives.

Likewise, bank and credit union executives that want to go on serving small business must understand that busy entrepreneurs need to do their banking while on the run.

“Lots of small business owners — such as builders, electricians, and decorators — spend their days on the road and run their businesses from their mobile phones,” Forrester states in The Digital Disruption of Small Business Banking. “Although 77% of U.S. small business owners and their employees use their mobile devices to help run their businesses, far fewer use these devices for banking transactions: Just 29% pay bills using mobile banking, and even fewer make transfers through their bank’s app or mobile site.”

Checking balances, verifying available credit, and moving funds or paying bills on a smart device are table stakes, according to the report. But beyond that many smaller firms require more specialized financial services like foreign exchange, merchant services and the ability to perform phone capture of batches of checks.

In addition, entrepreneurs use many apps and mobile sites to manage other financial aspects of their business that are currently seen as outside the scope of the traditional banking world. Forrester suggests that this is part of the appeal of ecosystems that combine many kinds of financial services from multiple providers into one platform that allows users to move easily from one function to another.

All of the above isn’t a prediction Forrester is making, but an observation. Nonbank companies have converged on banking’s turf from different directions but are becoming a growing presence as they add functionality.

“Disruptors like Shopify, Stripe, and Xero are becoming the brands that millions of [SMB] owners look to when they need to find or use a new product or service to help them run their business,” Forrester states. Take Xero. It began as online accounting software but has grown into an ecosystem available in over 100 countries, including the U.S. Just a handful of U.S. banks connect with Xero’s platform.

Such encroachment gained speed because banks underinvested in the digital services smaller firms needed, Wannemacher argues in another report. Even while some institutions built respected and substantial treasury management services, many bankers saw engagement with smaller businesses mainly as a matter of lending more. Credit increasingly is a commodity, however, not a value-added service.

Forrester suggests that the advent of ecosystems will drastically reduce the number of banks needed in many countries, including the U.S., forcing “traditional banks and new entrants into one of three fates: irrelevance, insolvency, or innovation.”

Mobile Banking Step-ups May Bring Some Rebound for Banks

That’s a grim outlook except for that handful of engaged institutions. But some hopeful news comes from J.D. Power, in a segment of its Small Business Banking Satisfaction Study.

The firm found that while branches remain important to many entrepreneurs, small business mobile banking has increased in utility and importance.

“Bank investments in mobile offerings are starting to pay off in the form of higher satisfaction scores as a critical mass of small business customers adopts the technology,” says Bob Neuhaus, Vice-President, at J.D. Power Banking Intelligence. “This has been a major challenge for banks for many years as they’ve tried to balance the high-touch customer service needs of the small business banking segment with the high cost of providing hands-on account management. Now, for the first time, we’re starting to see well-designed mobile banking offerings contribute to improved customer relationship management.”

Neuhaus says that more banks and credit unions have stepped up their investment in developing better small business banking apps, in part through a growing understanding of what entrepreneurs need the technology to do for them.

The state of satisfaction demonstrated by the scatter diagram below portrays a work in progress. 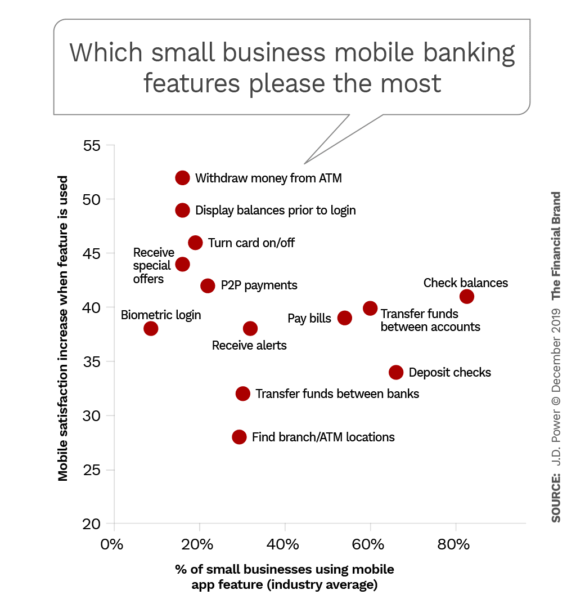 Notably, the firm states that in initial results of a pending study of consumer mobile banking, the rate of adoption (53%) is lower than where business adoption has risen to (61%). 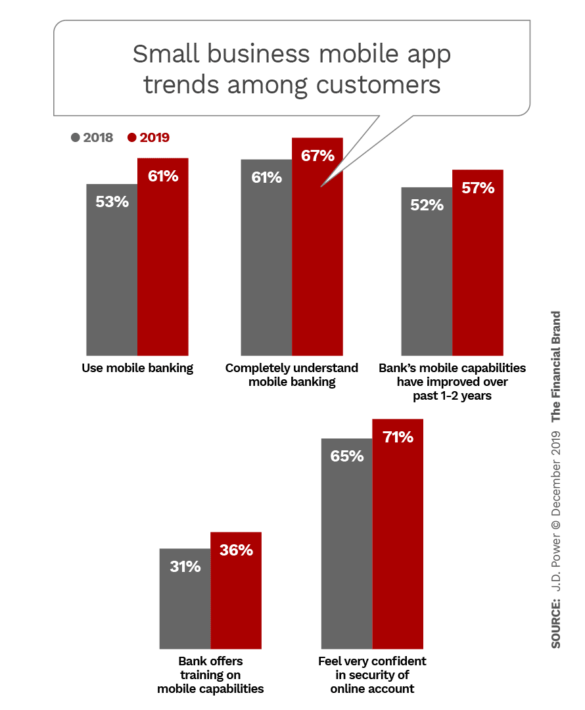 In keeping with the busy lives of entrepreneurs, Neuhaus says that the best training he has seen comes in the form of on-demand video. This solves immediate needs and can be supplemented by branch staff.

What the Future Holds for Small Business Banking

Googling “small business mobile banking” turns up numerous web pages devoted to promoting these services directly from banks. There are already digital competitors out there, such as Azlo, a simplified, digital-only account powered by BBVA through its New Digital Businesses Unit that Fundera called “one of the most tech-savvy business checking accounts we’ve ever seen, as well as being one of the only business checking accounts you can open online without visiting a physical bank branch.” Fundera also points out that Azlo integrates well with multiple platforms, including Xero, mentioned earlier.

This brings things back to Forrester’s take on the outlook. The firm believes that competing alone will no longer suffice.

“Banks have spent decades building their own products and services in-house and offering one-stop-shopping for small business banking services,” the firm states. “But the ability to create new value by integrating further capabilities to create new value, such as integrating accounting with banking or POS systems with inventory management, means that a siloed approach to small business services is no longer viable.” Instead, the firm predicts, more and more institutions will need to strike partnerships.

Finding a role in ecosystems is a key challenge for banks and credit unions. Four potential roles Forrester identifies are: