Subscribe Now Get The Financial Brand Newsletter for FREE - Sign Up Now
Jane Fraser has been CEO of four Citi units and now heads up a fifth and the largest, the Global Consumer Bank and is President of the entire company. Her route to being one of the highest ranking women at a top 5 U.S. bank included stops at Goldman and McKinsey.

“I’m not comfortable unless I’m 120% prepared for something,” says Jane Fraser of Citigroup, and so it was with some trepidation that she weighed an invitation to play golf with Tiger Woods.

In a touch of irony, Fraser was born in St. Andrews, Scotland, the storied home of golf. Her self-assessment of her game: “I’m OK at golf.”

But it’s one thing to play a social round with fellow business executives and another to play with one of the greatest professional golfers ever. The event was going to be filmed, and that also gave Fraser pause.

What finally decided the matter was the advice of one of her two sons — then 11 years old.

When Fraser told that story to a group of young business aspirants in a 2016 speech, she didn’t mention how she golfed that day. But then golf was never a priority for Fraser, who preferred to apply herself to her day job. In October 2019 Fraser made the latest career progression when Citigroup CEO Michael Corbat named her both President of Citi and CEO of the bank’s huge Global Consumer Banking unit. Observers have their eye on her as Corbat’s potential successor. This would make Fraser, 52, the first woman to serve as the CEO of a Wall Street bank.

A Career Marked by Job Shifts that Taught Lessons

While that would be a milestone in the biggest financial league there is, Fraser has experience with being “first” in the banking business.

In June 2015 Fraser became the first foreigner and the first woman to serve as CEO of Citigroup’s Latin American operations. That includes running Citibanamex, a huge assignment, including oversight of an organization with more than 1,400 retail branches throughout Mexico and over 29 million retail banking consumers. In a report from the investment banking firm of Keefe, Bruyette & Woods, banking specialists, noted that financial fundamentals at Citibanamex had improved in Fraser’s time in the Latin America chair.

That job, from which Fraser is stepping into her new positions, came with its challenges, including closure of some offices in other Latin American countries to sharpen the division’s focus and learning to do business in a region where corruption and violence make the job a tough assignment. But then Fraser’s 15-year career with Citi has meant taking jobs with organizational or personal challenges.

During the financial crisis, for example, Fraser headed Citi’s Corporate Strategy and M&A group. Part of the job there, she told an interviewer, was moving around staff to set up viable companies that could then be sold off.

After this job came such posts as a four-year term as CEO of Citi Private Bank, in London, followed by nearly a year at the top of Citi Mortgage, in St. Louis, which then segued into a year as CEO of Citi’s Consumer and Commercial Bank and Global Mortgages. In all that’s experience in four bank divisional CEO positions, now leading into a fifth with the leadership of the entire organization potentially in the offing.

Through much of her banking career, Fraser has been seen as an executive on her way to the top, but who has also had regard for the evolution of the business and an interesting take on the relationship between career and personal life, something she has addressed publicly on several occasions.

REGISTER FOR THIS FREE WEBINAR
Improving Digital Banking Experiences in a New Consumer Reality
The COVID-19 pandemic has moved the majority of consumer and small business banking engagement to digital channels. Register for this webinar from Informatica to learn more.

An Eye Over the Horizon from the Beginning

Fraser took a master’s in economics at the University of Cambridge in 1988 and became an M&A analyst at Goldman Sachs in London at 20. She’d always been something of a “nerd,” in her own words, and she found herself in a diverse U.K. financial office where she was “the boring British girl.” Everyone around her came from places in Europe that sounded exotic and spoke other languages and she had a hunger to experience some of that firsthand.

Her thinking came down to Germany or Spain, and Spain somehow seemed more exciting, she explained in a speech.

“That was literally the driver of my decision,” she said, as simple as that. She took a brokerage job in Madrid. 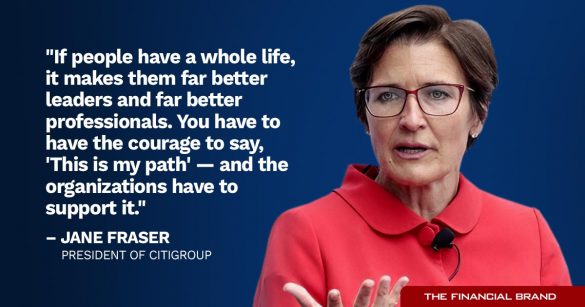 After a couple of years in Spain, the young Fraser wanted to see how she could do in the U.S., and spent two years earning an MBA there, at Harvard Business School.

She had really enjoyed her time at Goldman Sachs and learned a good deal there, and began to think about returning, with the MBA added to her credentials. But one thing bothered her.

Few women held senior positions at Goldman at that time, she said in a speech, “and those who were there were rather scary … dressing practically like a man, or in suits that were horrendous. And none of them were happy.”

She worked hard, but hoped to have a life.

Ultimately a comment from one of many mentors she’s been fortunate to have helped her with such decisions.

Said the mentor: “Your life is going to have several careers, so take the pressure off yourself about doing everything at once.”

The hope for success with some normality led Fraser to take a consulting position with McKinsey — “not a walk in the park, but a bit more predictable than M&A” she told an interviewer from LinkedIn. She spent ten years at McKinsey, and made partner about halfway through her tenure there just after having her first son. In her remaining time she chose to be a part-time partner, in order to spend time with her young children.

In some cases Fraser recounts how this meant training up people who wound up going past her own position at the firm. This was something that took some getting used to, but she put those feelings aside and took the perspective of seeing people she’d worked with advance.

“If people have a whole life,” she explained in the LinkedIn interview, “it makes them far better leaders and far better professionals. You have to have the courage to say, ‘This is my path’ — and the organizations have to support it.”

Fraser also believes that having children brought her more down to earth, and taught her some balance. “You learn that you can’t do everything at the level you are comfortable with,” she explains. “You learn to do things at 80%. That was a game changer for me.”

It ties in with the way her son helped her come to terms with the idea of not having to be a perfect golfer to enjoy a round with Tiger Woods.

Moving into the Banking Business at Citi

As her sons came to school age, Fraser returned to full-time work, taking the Citi acquisitions post. Of the London Private Banking job that followed, Fraser stepped into a situation where the division was losing money, but she turned it around. She found the work itself fascinating.

“By definition the clients you face are more successful than you’ll ever dream of being,” says Fraser.

Adaptability is something Fraser has had to learn along the way. After being based in London for the private banking job, she moved to St. Louis — as head of Citi’s mortgage operation.

Multiple adjustments had to be made. On one hand, she was shifting from the financial equivalent of making bespoke suits to one of making off-the-rack clothing. In the Midwest she learned how to run a big factory-type operating business.

Another adaptation came with her own clothing.

“I dumped the Chanel suits and found myself in jeans with a Cardinals baseball shirt,” Fraser explains.

When she made the move to the Latin America post, her husband, who had had experience in Mexican banking, counseled her this way, she said: “Be yourself — don’t try to out-machismo anyone.” Fraser and family were based in Florida as she tackled the Latin America responsibilities.

While Fraser will have broad organizational scope as Citi President, the global retail position will also focus her attention on an area that has long been central to Citi, consumer banking. Citi strategy has evolved over time, and geographic reach, once a key element of the company’s planning, has been refined in an effort to blend geographic presence in key cities worldwide with the best of digital.

In speaking on these subjects at Money2020 and elsewhere, Fraser notes that Citi sees an evolution in how service is provided but aims for moderation.

“Automation can go too far,” says Fraser. When branches grow too technological, as some competitors’ operations have, she believes, “they can become sterile and impersonal.”

Citi has learned that technology needn’t always be homegrown, she says, partnering with other firms. But it has also learned that humanity is still an important part of consumer banking. Ideally, automation frees up human talent for the kind of interactions where the person-to-person connection is most important.

Fraser is also a big fan of empathy. A CNN interviewer once asked her about her reputation for straight talking, and Fraser said she’d never been a fan of corporate speak, hiding meaning behind fulsome words.

“I like straight talking. I think transparency’s important,” said Fraser.

But she added that in the course of turning around and transforming a number of difficult businesses, she has tried to think of how she would want to hear things if she were on the other side of the desk.

“You do it with empathy,” said Fraser. “One can be a straight talker without being an unpleasant person.”

Banks and Credit Unions Can Leverage AI to Drive ROI