Half of all consumers are willing to make payments by smartwatch, or even by smart jewelry. Several financial institutions are already in the game and the consensus is that the trend line for financial use of wearables is only going up.

For early morning surfers at Sydney’s Bondi Beach who get a little hungry, there’s no need to dig through their duds looking for a wallet or a phone. If they’re customers of Westpac Bank they can just stroll up to the nearest vendor in their wetsuit, buy some grub and pay by tapping a wristband on the POS terminal.

The wristband is one of several items in the Australian bank’s PayWear product line that include near-field-communication (NFC) chips that link to whichever account at the bank the customer chooses. The wearable products include several fashion accessories from designer Hayden Cox, one of which is a waterproof, battery-free patch that can be attached to a hat or sleeve. As described on the bank’s website, “The Centsitive Patch is a discreet ‘out-of-sight’ wearable option. … Add it to the inner sleeve of your ski or music festival jacket and simply reach to tap and pay with it.”

Across the globe in northern Europe, Nordea Bank customers will soon be able to make contactless payments using watch bracelets made by the Nordic design brands Triwa and Ur & Penn. Using a Mastercard platform and technology from Fidesmo, which uses a system of card tokenization, the Finnish-based bank plans is to add “jewelry and other gadgets” to the lineup of wearables consumers can use to make payments, including sports bands and smart watches,

“While at the moment it’s fair to describe Fidesmo as a niche offering,” says Juha Risikko, Head of Mobile Commerce at Nordea, “… we believe that payments will be integrated into various types of devices in the future and the combined impact of supporting multiple cases will have a big impact on our customer value proposition.” This is only just the beginning, the Nordea executive concludes. 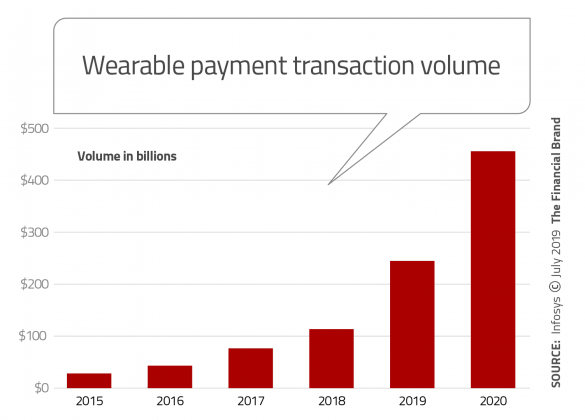 Banks outside the U.S. are not the only ones that have implemented wearable applications. When the Apple Watch was first launched in 2015 Citibank had an application ready to go. And so did four community banks and three credit unions, thanks to quick work by their vendor, Malauzai Software, now part of Finastra. After an initial flurry, however, things went quiet for wearables banking for the most part.

Have things changed for using wearable devices for banking? Are consumers on a mass basis really ready to use a watch or a patch to routinely pay for things?

Wearable Uptake by Consumers is Surging

Several trends suggest things have changed. Smart watches in particular have become very popular. Smartwatch shipments reached a record 45 million in 2018, according to Strategy Analytics. Further, almost 61 million people — one in five adult internet users — use a wearable device of some kind, according to Fortune.

Part of the reason for the surge in wearable use is that advancements in technology now allow smartwatches to connect on their own to wireless networks instead of having to be tethered to a person’s mobile phone. As a result, smartwatches from Apple, Samsung, Fitbit, Garmin and others increasingly are being used to control smart devices around the home, and to monitor users’ health.

eMarketer predicts almost double the growth rate of smart wearable use among people age 55 and older in part because of the health applications.

Another factor that will almost certainly fuel further wearable use is the rollout of superfast 5G mobile communications networks, now underway. That, combined with accelerating expansion of the Internet of Things strongly suggests the possibilities for wearables as both payment devices and general banking devices are much greater than just a few years ago. Gartner analysts predict there will be 25 billion smartphones, smartwatches, wearables, and other connected devices — including connected cars — by 2020.

People Ready for Wearable Pay, But Security is an Issue

Nearly half (47%) of U.S. consumers say they are willing to make a payment using a wearable device, according to research conducted by Transaction Network Services. Men, overall, are more likely to be willing to make a payment by wearable — 48% versus 39% for women. Willingness, not surprisingly, was also greatest among younger age groups, setting the stage for strong future growth, TNS states. 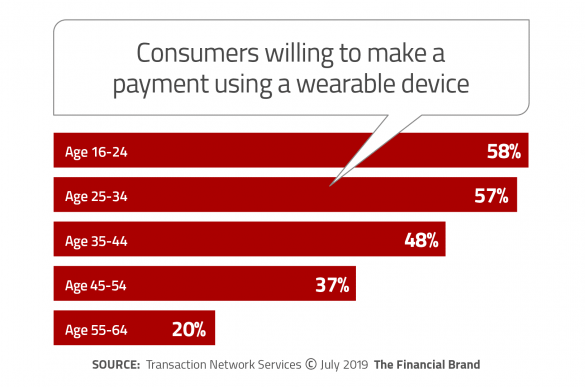 More telling is the fact that 23% of the 3,000 consumers polled by TNS own a smartwatch and of these just over two out of five (44%) confirm they already use it to make payments. In the U.S., the figure is 47%. 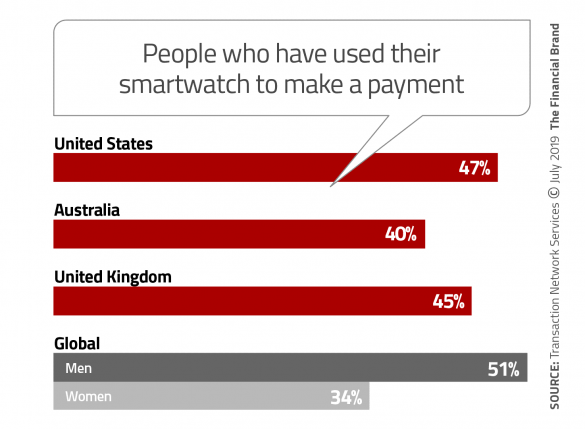 Of the consumers who are not yet willing to make a payment with a wearable device, the reason most likely has to do with security. Nearly two-thirds of consumers (65%) say security fears would stop them from using a smartwatch or other wearable to make a payment.

As with other types of payments, a large measure of the responsibility falls on merchants investing in systems to protect against data breaches. But as TNS observes, all players in the transaction chain must take necessary security precautions.

Wearables used for banking transactions presents unique security challenges for financial institutions, Infosys points out in a paper. The IT company says that “when a wearable device connects to smartphones or to any network, a high level of data security is required, because by default, the customer rarely considers security when wearing devices.” Financial institutions need to provide consumers with the option to use data of wearable devices remotely and erase data when the device is lost or stolen. Wearable devices must also use encryption when transferring data, Infosys states.

Belgian bank, KBC — which has a year-long wearable payments pilot underway involving watches, rings, and a key fob — says that if a consumer loses their wearable or it’s stolen, they can block it using the app they’re given as part of the trial or by having the linked payment card blocked, according to NFC World.

Don’t Rush, But Don’t Wait Either

Part of the challenge for financial institutions in embracing banking applications for wearable devices is that it’s yet another investment at a time when they are already challenged to improve and simply their online and mobile banking offerings.

“Wearable banking is not about only changing the look and feel of the user interface but also about creating a great experience and connecting the customer with newer features and benefits,” Infosys points out. The company cautions against overestimating its short-term potential. It does point out, however, that the growth of banking using wearable devices will be faster than mobile and online banking.

“Currently, banks are struggling to embrace payment wearables as they do not fully appreciate [their] impact and implications,” observes Terri Smith, founder and CEO of Digiseq, a fintech that helps to bring wearable makes and financial institutions together.

In a dialog with Women of Wearables, Smith says she sees financial institutions heading to open APIs [application programming interfaces]. APIs promote competition and motivate banking brands to be more customer-oriented. She believes banks and credit unions will eventually want to adopt payment wearables to expand their consumer offering, once they embrace it as an opportunity as opposed to a threat.

“Ultimately just like with emails and smartphones,” Smith states, “when the consumer realizes its convenience they will not want to let payment wearables go.”