Subscribe Now Get The Financial Brand Newsletter for FREE - Sign Up Now
Jaw-dropping first-year user numbers for Erica, BofA's AI-powered chatbot, have grabbed bankers' attention. Yet analysts, and even the bank itself, say it's early in the game. More information is needed to see if the mobile app can handle more complex needs and nudge customer satisfaction noticeably higher. But if it does, then the giant bank has a big head start.

Is it possible that a mobile app used by seven million people — and which is adding more than half a million new users per month and has already handled more that 50 million client interactions — would not be considered a success?

Definitely. Even Christian Kitchell, AI Solutions and Erica Executive at Bank of America declares, “We’re only in the first mile of a marathon.” Forrester Principal Analyst Peter Wannemacher says Erica’s number of interactions is a positive, but doesn’t indicate success. He does add, however, that “Erica has been more successful than many industry insiders — probably even Bank of America itself — thought it would be.”

Bank of America’s virtual financial assistant (the name is derived from the last part of “America”) launched in June 2018.

It’s hard not to contrast Erica’s status with that of Finn, the mobile banking brand that JPMorgan Chase axed after less than a year in operation. It’s not a fair comparison, of course, because Finn was a direct bank — with accounts — whereas Erica is a chatbot linked to existing Bank of America accounts. By function, Erica is much closer to Siri and Alexa than to Finn.

Jim Marous, Owner and Publisher of the Digital Banking Report and Co-Publisher of The Financial Brand observes that the “deployment of comparatively easy solutions to Erica has been done very well by Bank of America. But the institution is still in the first phase of a longer journey of conversational capabilities to make consumers’ lives easier.”

Key Questions: The larger issue is over whether the Erica chatbot represents a turning point in how consumers prefer to interact with their primary financial institution. Because that question may not be answered for another year or longer, the question then becomes: Can any bank or credit union afford to wait to find out? By then the second-largest bank in the U.S. may have built an insurmountable lead. Or, conversely, is an artificial-intelligence powered digital assistant not something every retail banking provider needs, the way ATMs, online banking, and mobile banking are?

The Erica chatbot, which resides within Bank of America’s mobile banking app, was launched to the bank’s full base of mobile app customers after a three-month phased rollout in 2018. Mobile customers must log in and initiate Erica from within the app. To date, seven million of the bank’s 27 million active mobile users have activated the chatbot.

Erica is only available to mobile users currently but the bank is planning to make it available to the ten million customers who use its online banking platform but are not mobile banking users. Kitchell declined to give a specific timeframe.

Erica users communicate with the chatbot by voice, text or tap — which Kitchell collectively refers to as “tri-modal.” In the initial rollout, Erica was capable of assisting with these functions:

The chatbot at launch was capable of understanding 200,000 variations of questions consumers would ask. At present, the bot’s capacity is approaching 500,000 variations, according to the bank.

A notable addition to Erica came in November 2018 with the launch of Insights, a series of proactive financial management tools, some powered by AI. The first group of insights included:

“This was the first time Erica was looking at people’s situation and behaviors and offering proactive guidance and insight to help consumers stay more connected with their cash flow, to avoid surprises and identify savings opportunities,” says Kitchell.

Much of the Insights functionality relates to recurring charges. For example, Erica flags infrequent charges such as semi-annual insurance or gym payments. The app will also notify customers of any increase in a recurring charge, such as a subscription to Netflix or Amazon Prime. Kitchell says that by activating Erica, consumers get these notifications automatically. However, they can turn them off if they wish. Few customers do that, it would seem. After Insights was launched the daily engagement with Erica doubled. “On average 150,000 customers now tap on the insights proactively shared by Erica each week,” the bank says.

An new insight that’s coming, called Balance Watch, will notify consumers when typical spending patterns have the potential to take their balance below $0 in the next seven days.

Initially the transaction-searching function was overwhelmingly the most popular feature, according to Kitchell. Since the launch of Erica Insights, however, he says “we get a ton of engagement with bill reminders.” Spend Path is also resonating, he says. “If you’re running a little hot with your spending, two weeks into the month, Erica lets you see that so you can make adjustments to stay inside your budget before its too late.”

“If the back-end system is doing a so-so job at spending categorization, then the insights will be so-so.”
— Peter Wannemacher, Forrester

Forrester Research has tested Erica and Peter Wannemacher confirms that the Insights functions do work, but says there is room for improvement. “It is often useful,” he says, “but can be confusing or clunky.” He explains that sometimes an insight Erica gives about your money doesn’t align with what you think you’ve done. It comes down to behind-the-scenes capabilities, he says. “If the back-end system is doing a so-so job at spending categorization, then the insights will be so-so.”

Millennials Like It, of Course, But So Do Boomers

Bank of America wasn’t at all surprised that nearly half (49%) of all Erica users are Millennials. In its consumer research leading up to the launch of the app, the bank heard three main wishes for a virtual agent, according to Kitchell:

All three preferences “fall into the Millennials’ wheelhouse,” Kitchell observes. Wannemacher points out that while Millennials really aren’t all that different in their financial behavior from the general population, they are different in one respect: their willingness to experiment. “They way over-index in their willingness to try some new service no one’s heard of, like Venmo, whereas an older person won’t,” the analyst states.

Another factor working in favor of Bank of America’s virtual agent play is that four in ten Millennials have their primary checking accounts in just three banks — Bank of America, Chase and Wells Fargo, notes Ron Shevlin, Managing Director of Fintech Research at Cornerstone Advisors. In a survey of U.S. consumers, Cornerstone found that of those who opened an account at a digital-only bank, more than two out of five (44%) of young Millennials (age 21-29) did so “to get better financial management tools than I was getting with my primary bank.” Erica, particularly with its Insights capabilities, appeals directly to that need. 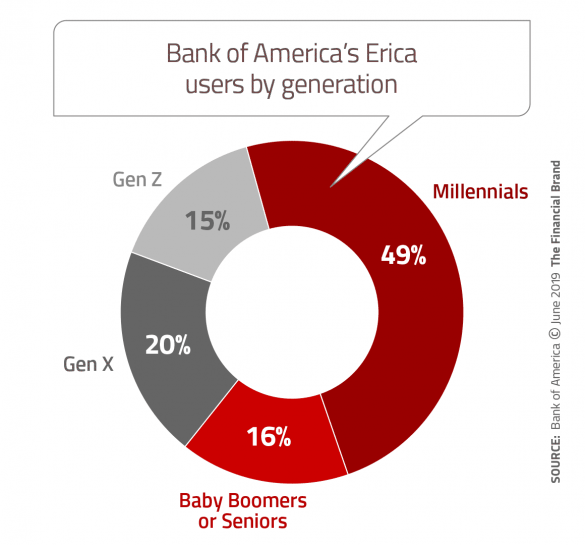 Kitchell says he and the Erica team were surprised at the relatively strong response from the Baby Boomer segment. One reason for that, he surmises, is that Erica is a good guide to the functions and features of BofA’s mobile banking app.

“The app has many great features, but they can be a bit daunting for people who haven’t done a lot in the mobile channel,” Kitchell states. Erica, in a conversational way, helps identify features people may not have known about or how to use.

“Bank of America has recognized — and in some sense proved — the role of a chatbot as a navigation mechanism,” observes Wannemacher. Being able to ask Erica a question and have the app guide you to the appropriate feature, content or functionality “is one of the most important roles the app plays.”

( Read More: How Will People Bank in the Future? )

How Good is The Handoff on Tough Questions?

The belief of some analysts is that the vast majority of Erica interactions at present are relatively simple customer service and navigation issues. For more complex issues — questions about fees, reversing a transaction, etc. — the virtual assistant routes the customer to a live agent.

In response to a question from The Financial Brand Kitchell declined to give the percentage of Erica interactions that are routed to humans, but did say that “it is a lower number than in any other channel right now. “I can tell you,” Kitchell adds, “that the vast preponderance of calls that are being routed through to our specialists are for more complex needs, whether somebody has a question about a fee or a question about a potential fraud.” 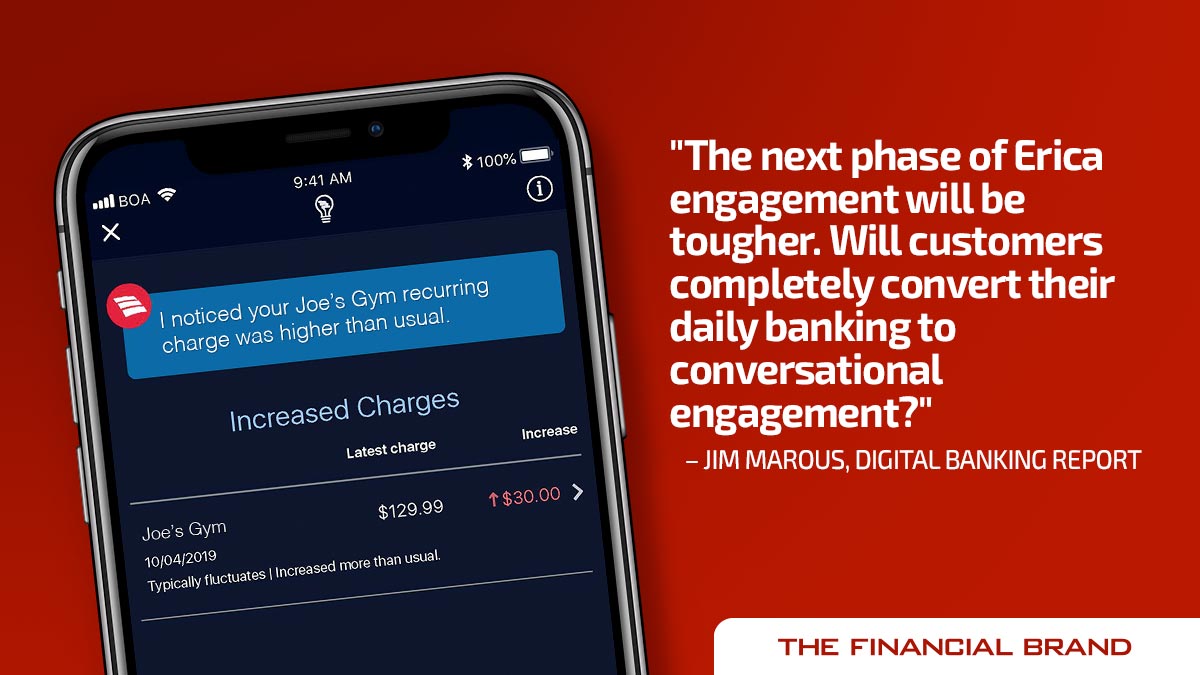 Such issues present a much higher hurdle for chatbots than routine matters. As Jim Marous notes, “The next phase of Erica engagement will be tougher. Will customers completely convert their daily banking to conversational engagement? Will they move more complex engagements to Erica?”

Forrester’s Wannemacher confirms the challenge. “Having reviewed BofA’s mobile app and Erica as part of our look at mobile banking, Erica is not worse than most banks at customer handoffs across channels. But it is also true that banks in general have done a poor job of designing cross-channel journeys.”

Is an intelligent chatbot like Erica the future of retail banking, or, as Wannemacher put it, just a slightly better, more expensive IVR (interactive voice response) solution? Views are mixed.

While Wannemacher says Forrester’s view of the chatbot is “decidedly positive,” and that “Erica is the linchpin of Bank of America’s current digital banking experience for many of their customers,” he nevertheless believes it’s “way too soon to tell if Erica becomes the benchmark upon which many other banks need align themselves or try to beat.”

Erica is not yet a differentiator, according to Marous, although he acknowledges that BofA has definitely proven the viability of a virtual assistant platform. In addition, Marous says that what the bank has learned about conversational banking gives it a lead. “Other organizations definitely have some catching up to do.”

Cornerstone Advisors’ Ron Shevlin points out that without additional metrics, it’s impossible to address how much of an edge Erica gives BofA. “Usage numbers mean nothing without impact metrics like improved customer satisfaction, reduced service costs, and deeper customer relationships, all tied specifically to use of Erica.”

BofA’s Kitchell says that it’s too early to provide those type of metrics. The bank has done “a ton of surveying,” he says, and has seen Erica’s overall satisfaction tracking at about 82-83%, “which compares very favorably to all of our other digital channels.” He also says early signals have been good in regard to Erica helping to facilitate deeper relationships.