Subscribe Now Get The Financial Brand Newsletter for FREE - Sign Up Now
There's no 'set it and forget it' in web-based marketing. Pay-Per-Click marketing and Search Engine Optimization must work together for financial institution websites to produce sales and signups. The right mix demands constant attention to avoid unintended, and costly, search results.

In 2017 rapper “21 Savage” released a song called “Bank Account.” Ten years ago this wouldn’t have registered on financial marketers’ radar, unless they happened to be rap fans. But in today’s search-reliant marketing age, most banks and credit unions have been affected, even if they’ve never heard of the song or the artist.

Blame it on how Google works. In very broad terms, there are two ways to build traffic on your website through search engines.

One way is Search Engine Optimization (SEO), a variety of techniques for increasing traffic through “organic search.” Essentially, this means taking steps to make it easier for Google and other search engines to find your site’s content, “judge” it to be valuable, and to match it to the search terms that people use to find material on the web. This costs nothing — that is, there is no charge from the search engines, though the talent to do SEO right may cost plenty. Practitioners speak in terms of “earning” attention organically.

The other way is Search Engine Marketing (SEM), a major component of which is Pay-Per-Click marketing (PPC) — often referred to broadly as “paid search.” Marketers bid for keywords to appear in the paid listings at the top of search results. The winners, judged according to their bids and other factors, appear. If a searcher clicks on a paid link, the site’s owners must pay a fee. Ideally, after prospects arrive on the landing page, they accept the offer and become conversions, and the cost of the click is more than paid for.

PPC can be very powerful, but on the other hand, a financial marketer’s goal can be undermined by factors out of left field, like 21 Savage’s “Bank Account,” which is assuredly not about the virtues of savings.

Situations like this cause multiple problems for marketers. First, they can crowd out financial institutions’ initial choices of key words in organic search. Second, financial institutions can end up paying for clicks that have nothing to do with banking. Google has no idea why the searcher clicked on a PPC spot. It just knows “click and ka-ching.” 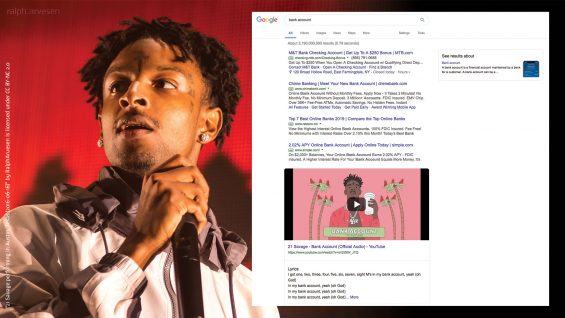 “You are paying for clicks people didn’t intend, which can frequently happen on mobile search,” says Wil Reynolds, Founder and Director of Digital Strategy at Seer Interactive, during a presentation at The Financial Brand Forum 2019. Marketers who don’t monitor and evaluate usage and results of PPC marketing “are literally burning money,” Reynolds adds. When SEO and SEM are pulled together into one view of what’s going on — which remains a rarity, according to Reynolds — huge patterns of waste can be identified. He says his firm spotted $97,000 in inefficient PPC spending in the first 20 minutes of evaluating web performance for a large banking client.

Issues in PPC will become important to more financial institutions because adoption of this technique is growing. Digital Banking Report’s “2019 Marketing Trends Report” found that 49% of institutions surveyed already use PPC or some other form of SEM and 39% plan to adopt it this year, representing a climb in one year of almost 80%. Reynolds makes it clear that success with these tools depends on active management — the financial marketer who thinks that they can “set it and forget it” is going to regret it.

PPC works, but Reynolds demonstrated that it works best when evaluated in conjunction with SEO. Unfortunately the whole area has been hyped to the max, according to Reynolds. He poked holes in several alleged priorities and gave examples of what happens when SEO and SEM aren’t properly managed.

Skewering Voice Search and Other ‘Must Haves’

So often, banks and credit unions hear that they have to climb aboard this trend, and that technology, ASAP, or they will lose ground to nimbler competitors. The list of urgencies just keeps on growing.

Financial marketers have to determine carefully whether their institutions will gain enough by being an early adopter to make the expense worthwhile. The notion that such investments will prove out in the long run sounds good, but for the vast majority of institutions, says Reynolds, simply isn’t realistic.

“How many of you get to have goals that you’re allowed to hit eight or nine years from now?”
— Wil Reynolds, Seer Interactive

Very large financial institutions can afford to put chips on every spot on the table, but most must pick and choose, or wait.

“Mobile is the future!” has been a rallying cry for years, notes Reynolds, and yes, mobile banking has become a growing force in the industry. However, he points out, pundits started shouting that mobile was the future back in 2001. The mobile services designed back then bear no resemblance to where the channel evolved, and many players would have wasted gobs of money.

“You would have been ahead of the game,” says Reynolds, “but how many of you get to have goals that you’re allowed to hit eight or nine years from now? We don’t live in an environment anymore where marketers are given the time to try anything for the long term. You’ve got to put pundits under more scrutiny when they claim something’s going to be the future —because you’re the ones making the bets.”

Reynolds sets about turning down some hype:

• Voice Search: One influential report predicts that 50% of web searches will be made by voice by 2020 — less than one year away. “How many searches have you done today?” a skeptical Reynolds asked the conference audience. “And how many were done by voice? Are all of you going to stop typing in six months?”

So much voice use is in the realm of “Siri, set the timer,” says Reynolds. “But you don’t make any money on that, do you?”

Statistics aren’t available for voice searches on Google, but using a proxy — based on his observation that older users end their voice requests with “please,” something no one ever types — Reynolds has reviewed voice-based traffic for banking clients. He’s found comparatively little.

“I’m not saying don’t invest in this,” says Reynolds. “But temper how much you invest.”

• Chatbots: “So, chatbots are going to take over,” says Reynolds. Pointing to his smartphone, Reynolds puts his finger on the fingerprint reader and obtains his bank balance in seconds. “If you don’t have fingerprint login, I’m sorry for you,” he says. No chatbot required, and no having the phone’s speaker broadcast one’s potentially low balance.

“Be careful of solving a problem that’s not really that much of a problem,” says Reynolds.

• Artificial Intelligence: “AI makes mistakes too,” just like humans, points out Reynolds. Yet experts often portray it as a panacea. ”

“All this stuff that’s thrown at you again and again, you have to learn to build up an armor against hype because it’s kind of cool to think about doing these things someday,” says Reynolds.

Improving on What Works Today: Marry SEO and SEM

Over the years, Reynolds says, he’s noted that SEO and PPC don’t talk to each other. In one sense, he means that literally. During web strategy meetings, he’d watch SEO teams scrolling through their emails when the PPC folks talked, and vice-versa. In the same way, available technology didn’t compare the results of the two strategies well either, or at least not without high add-on pricing.

“Even though you’re paying money for PPC clicks, Google won’t give you your organic rankings next to the PPC pages,” says Reynolds, “so you have to find your own way to get them.” He combines the data in an analytical tool from Microsoft called Power BI (Business Intelligence). He notes that other tools, also designed for evaluating large datasets, can be used for this purpose, including Tableau and Looker.

Understanding how SEO performance and SEM performance correlate grows increasingly important, according to Reynolds, because “people search differently today. They add more and more words to their search phrases, and then go with what they find on the first try, rather than refining their search multiple times until they get a precise fix. That isn’t necessarily a bad thing, not if they convert to business that is net profitable after the PPC cost is covered. One result of this trend is that the number of keywords financial marketers need to evaluate has risen tremendously. The kinds of tools Reynolds refers to above are needed because analyses can run into tens of thousands of search terms.

The interrelationship of sites has its own impact on a financial institution’s site strategy. For example, an institution that is a partner with NerdWallet needs to evaluate how that financial advice site’s material shows up in search versus its own content. Such comparisons can influence the search strategies and keyword PPD choices that the institution makes.

Banks and credit unions have to be careful which keywords they choose to pay for. If and when competitors’ PPC ads show up above the institution’s own, the marketing team needs to ask how much that impedes their ability to drive business with those keywords, even when they know that those words can result in conversions for them. Smaller brands need to think twice before going head to head on keywords with major banking brands that are already winning with those words.

The details of the evaluations that Reynolds demonstrated can grow technical quickly. But two examples from his presentation illustrate choices financial marketers will increasingly need to make:

1. Don’t rely on “Best” as a keyword. It’s common for financial institutions to choose “best” as a paid-search keyword. The rationale is that a consumer typing in “best” for a banking institution or a specific service wants the best of breed.

2. Pay close attention to the smallest details. “With Google, even prepositions count,” warns Reynolds. “You need to parse out all your words like ‘for’ and look at all the words that come after them to see if your landing pages are connecting with what people are really searching for.”

Remember, he adds, “when you’re paying Google for keywords, they don’t care that you’re the wrong answer to consumers’ search.”