Subscribe Now Get The Financial Brand Newsletter for FREE - Sign Up Now
Gary Vaynerchuk (Gary Vee) is a serial innovator, social media icon, chairman of VaynerX, and the active CEO of VaynerMedia. He wants you to have a proactive approach to marketing and be willing to disrupt yourself to avoid obsolescence. In this Q&A interview, Gary discusses the use of social media, the need for supportive culture and leadership and the importance of a personal brand.

Upon meeting Gary Vaynerchuk in person for the first time at this year’s Financial Brand Forum, I was immediately struck by his energy, enthusiasm and gratitude. Having followed Gary on Instagram, Facebook, Twitter, YouTube and other channels, this wasn’t a complete surprise, but you need to see him in person to realize that his level of engagement and passion for what he does and communicates is no act for social media. He is a huge believer in the value of hard work, testing new ideas, helping others succeed and disrupting oneself.

He is also a social marketing machine, continuously on his smartphone, generating a never-ending barrage of great content of video, audio, and blog material every day. At the Financial Brand Forum, he even had his personal videographer with him, capturing every moment of the day for future distribution. Despite his amazingly busy schedule, however, he never is too busy to engage with one of his fans — who, like me, are somewhat awestruck by his message and presence. He is genuine, grateful for his followers, and never turns down a request for a selfie. 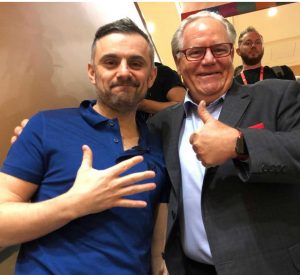 Gary’s opening keynote presentation at this year’s Financial Brand Forum was direct, insightful and without compromise. His message of using social media marketing to improve results in an increasingly digital world was well received by the audience in excess of 2,000. His ability to combine his personal story with industry insights and humor was entertaining as well as educational. While not being hesitant to call out marketers in the audience for being late in the use of social media marketing, he provided inspiration that it is not too late to get on the bandwagon.

After his presentation, I had the unique opportunity to sit down for a one-on-one Banking Transformed interview with Gary to get some additional insights into how banks and credit unions should leverage social media, the importance of supportive culture and leadership, and the concept of building a personal brand.

What is key message you want financial marketers to hear?

Gary: Marketers can’t hold the past on a pedestal. To me, there’s a lack of common sense and a disproportionate lack of consumer-centric DNA. There’s a lot going on right now in modern marketing that keeps me baffled, and I want to continue to put pressure on it. First, selfishly, because I think I’ll be historically correct, and because it feels amazing when you run into somebody who says “Hey, I listened to your message and good things are happening”. That feels remarkable impacting people’s lives or companies. It’s an incredible high, and having admiration is an incredible ambition of mine, and so it feels good.

How about for an industry that isn’t feeling pain right now?

Gary: The height of the black-car taxi industry was the year before Uber was invented. Great prosperity is usually the early indicator for turmoil.

Is Amazon the biggest threat to banking?

Gary: 100 Percent. They have the consumer. In fact, Amazon, Apple and Netflix have the consumer. Even Spotify. They also have data. They have lots of access to insights. But Amazon most because it has permission. They provide free shipping and you’re saving a fortune. Plus, Amazon is also giving you the Prime content for free. You get the competitor to Netflix, Hulu, Disney along with that package. That’s been one of their bigger challenges … to make sure everybody in America knows that they have the Prime subscription when they have a Prime account. Listen, unless the government gets involved or unless Bezos jumps off of being CEO, Amazon will continue to innovate and continue to be successful because it is so consumer-centric. 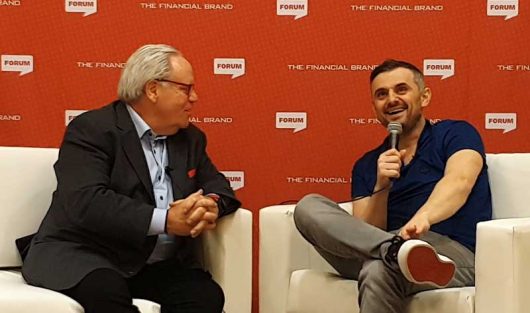 Should organizations give their employees the right to pursue self-development?

Gary: Any great company will allow its players to be put in the best position to succeed. And, if you are fortunate enough to have innovative thinkers, people that are on the offense who are not delusional, that is a bonus. I think one of things that I’m passionate about is for all my sizzle, and all my new thoughts, I’m grounded in business practicality. I noticed a lot of people that follow me come and pitch these wild ideas in their company that are not going to happen.

They’re like, “Hey bank, let’s do VR”. And I think that’s cool. And so I think companies need to allow their thinkers to think, but thinkers or innovators or people in the offense in these companies need to understand if they’re lucky enough to be in an organization that gives them some freedom, they can’t come with, “Let’s do a ‘Pokemon Go’-like thing in VR for our bank,” because that doesn’t make any sense.

Everything I mentioned today about social media marketing will work today — it will work to run thoughtful Facebook ads that tell people why your branch is a better branch than the one down the street. Or, running a piece of LinkedIn content on tax day like: “Have you thought about these six unknown ideas to save on taxes?” This builds an affinity that says, ‘Who is this company that just helped me? Is this something I could consider?’

Value is what’s important and not being a technologist or a futurist or being innovative for the sake of being innovative. Delusion is a very scary place where a lot of people go when they are given a little too much freedom.

Is the banking industry too transaction-oriented?

Gary: The industry is disproportionately short-term transactional, and that creates some short-term benefits, but retention is going to be an issue. I think the products and services that most banks and credit unions are providing, versus the alternative products and services that are emerging from digital-first competitors, is something that’s going to cause a lot of friction in the future.

Is there any room for mass media any more?

Gary: Occasionally. The Super Bowl is amazing. Product integration is key. If you’re a top 10 bank or top 10 in your category, instead of spending $50 million on television commercials that nobody sees, I’d rather give a big-time production company $10 million to be the sponsor of a new show on Netflix called “ATM”, where the whole show transpires around ATMs and it is literally your company.

The Ed Sullivan Show was funded and created by the Lincoln Town Car Company. People forget that historically television started with brands funding it. Commercials came later. I believe now that commercials are going to be disappearing because we’re streaming — traditional ads are a tough buy. But I do believe that Netflix and Hulu and Amazon will test commercials. My intuition is if they’re smart, they’re going to do product integration. I’ve always thought that a big truck company should do a show called ‘The Tailgate’, where the whole show again is at a tailgate. And it’s your truck as the family’s truck. It’s about product integration. 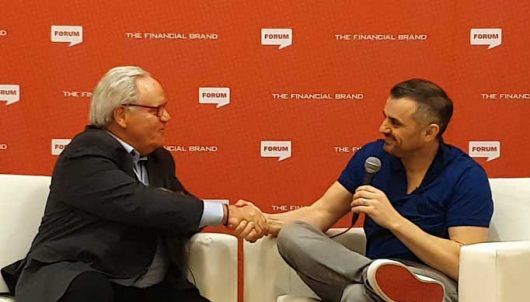 Gary: It’s the new world we live in. On Twitter, the number one thing that people were talking about during the Masters on Sunday was Tiger chewing gum. So, let’s say we have a gum client. I call them — this is Sunday now, because we’ve got to move fast. I want to know what gum he’s chewing and jump on this. Nobody watches commercials any more. Nobody goes through direct mail carefully. Nobody is going to page 37 of a magazine looking at the ad carefully — the world has changed … I’m sorry. Farming used to be our number one industry. Sears was the number one retailer. Walter Cronkite was America’s dad. Things change quicker than ever.