Subscribe Now Get The Financial Brand Newsletter for FREE - Sign Up Now
West Coast regional MUFG Union Bank chose to disrupt itself with a digital+physical offshoot. It's new PurePoint brand uses a new strategy that marries high-rate mobile savings products with high-touch branches that are "digitally-infused". Two years in, the unit's combo of high-rate savings and small-but-plush cashless branches is a massive engine generating lending fuel.

PurePoint Financial sits at the epicenter of one of the hottest debates in retail banking: What’s the right balance between physical and digital?

Pure-play digital banks wow with their apps, but can fall short on support and service. Plus they lack the emotional connection of human contact. Traditional banking providers have that human connection, but struggle with providing the kind of seamless digital experience that consumers now expect.

In early 2017, MUFG Union Bank decided to prove you can get it right on both fronts. Instead of ramping up a digital-only offshoot, as a growing number of traditional U.S. banks are doing (e.g., Chase with Finn, Citizens Financial with Citizens Access), it launched what it calls a “hybrid digital bank” under a separate brand — PurePoint Financial.

PurePoint blends a modern digital platform with branches, which it calls “Financial Centers.” But these are not typical branches. They are physical facilities manned by real people, but they operate digitally in every possible way. No teller stations; no cash on site; no paper.

Unlike its parent, PurePoint is not a full-service banking provider. The hybrid brand offers only two products at this point: savings accounts and CDs. No checking, no loans. Consumer loans are in the works, says PurePoint President Pierre Habis. But for now, PurePoint is a place for “committed savers” to park their funds — provided they have $10,000 in hand. If they do, parking it at PurePoint is an easy choice because the bank makes sure it stays at or near the top of saving-rate tables (2.35% APY as of March 2019).

The hybrid bank describes itself as “the modern way to save.” consumers can open accounts online, on their mobile phone, or over the phone 24/7. They can also open accounts in person at one of 22 locations in six metro areas.

PurePoint has become an efficient funding machine, providing $6 billion for MUFG Union Bank’s lenders to use for business loans, among other revenue-producing products. Habis tells The Financial Brand that PurePoint currently provides about 5% of the deposit funding for MUFG Union Bank, which has total assets of about $130 billion. (Union, in turn, is part of Japan-based megabank Mitsubishi UFJ Financial Group, with about $3 trillion in assets.)

“We generate a lot of assets in this country, so the deposits are very needed and desired,” says Habis, who divides his time between PurePoint and running Consumer Banking for MUFG Union Bank.

$6 billion in deposits in two years is a sizeable pot of money, even in context of a $3 trillion institution. By comparison, Goldman Sachs Bank’s Marcus brand reached $35 billion in deposits in three years, and did so without branches. But keep in mind that Marcus started with a dowry of $16 billion from its acquisition of GE Capital’s online deposit platform. What’s not known is whether consumer deposits gathered from an all-digital bank are as “sticky” as deposits at an institution that also maintains physical locations.

Habis says that 52% of PurePoint’s deposits come from the four states where it has financial centers (Florida, Illinois, New York and Texas), and that these deposits tend to stay longer and have higher balances than the hybrid bank’s balances on average.

PurePoint doesn’t play “the rate game,” as Habis calls it, so none of those 3-month teaser rates, for example. And there are no monthly fees.

“Some people are constantly rate shopping and moving dollars around,” he explains. “But depositors have told us that we’ve proven to them that they don’t have to worry anymore [about chasing rates], because they know we’re always competitive and will always be fair.”

Banking transformed webinar
How To Compete With the Big Banks on a Limited Marketing Budget
Join Jim Marous and James Robert Lay as they discuss how to unlock the secrets of a digital content marketing strategy that can yield 10X more loans and deposits.

“Essentially we took every benefit of a pure digital business and infused it in a physical surrounding,” he explains. When a consumer opens an account in a branch, there are no paper forms. Everything is done on a touch screen. If consumers wish to fund the account with a check, they can take an image of it at the self-service kiosk and leave with the check. And remember: there is no cash handled at these branches. That saves a ton of costs from vaults to teller stations to couriers, etc. Most of the branches are small, between 2,000 and 2,500 square feet, but seem larger with “living room” space filled with comfortable seating, coffee, tea, water, and snacks available — and, of course, WiFi.

“The reality is not every consumer is ready to go purely online with their money.”
— Pierre Habis, PurePoint Financial

“Ultimately anything that’s non digital costs money,” Habis observes. “Re-engineering every single process has given us the ability to consistently offer great rates and at the same time tell consumers that they don’t have to give up people if they don’t desire. The reality is not every consumer is ready to go purely online with their money.”

The branches are manned by a handful of highly trained staffers. In addition to opening accounts, they provide savings advice to anyone who comes in. The advice can be about rates, but also deposit insurance. The employees are all very knowledgeable about FDIC insurance. They will review information on the FDIC website with consumers to help them calculate maximum coverage.

Because PurePoint is also a digital bank, people can open accounts and make deposits online or on their mobile phone. But, as Habis observes, there is a certain segment of the population for whom going to the bank to make a deposit adds an element of social satisfaction for the day.

And Habis, who selects every facility himself, makes sure consumers who come to a branch find it welcoming. This includes showing the work of local artists, which has proven very popular in several cities. 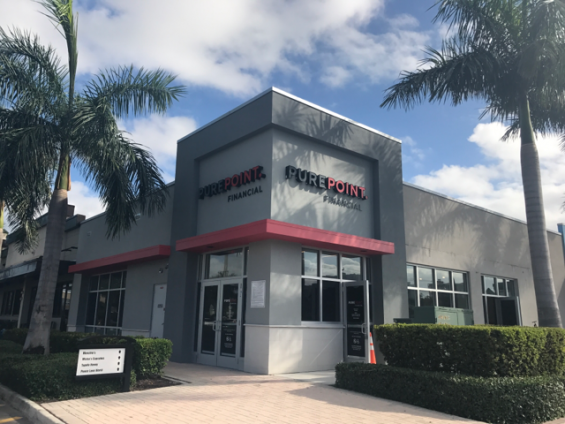 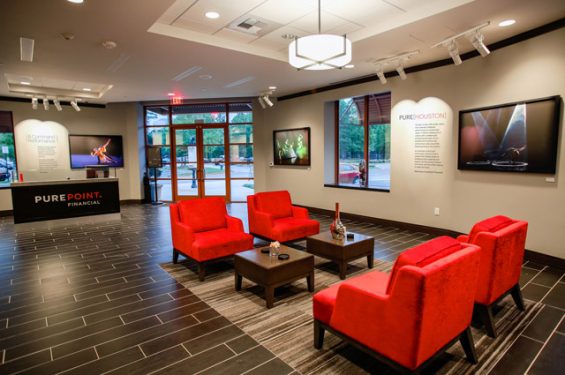 PurePoint does an annual survey exploring the saving habits of the general population. In the latest survey, it found the current state of savings in America is not moving in the right direction overall. Even though more people declare that saving $250 is more fun than losing five pounds, only 41% of Americans regard themselves as “disciplined, habitual savers.” That figure is down six percentage points from the previous survey. Further, the median non-retirement savings balance fell 35% from $2,300 to $1,500 over the course of one year.

Disciplined — or committed — savers are PurePoint’s primary market. However, Habis says part of the hybrid bank’s mission is to educate and encourage Americans to start saving again. He explains that the bank’s $10,000 minimum deposit was a starting point to establish a sustainable business model, but long-term he sees that minimum falling. In addition, he says PurePoint is “considering several technology-oriented enablers to help people save.” Initially these “enablers” would most likely be educational apps rather than the kind of automated, goal-oriented savings apps like Digit, Acorns, and SmartyPig. PurePoint already has online tools that explain concepts such as how compound interest can turn small deposits into large amounts.

Another question Habis is often asked: “How are you doing this within a big traditional bank like Union Bank?” His response: “We’re disrupting ourselves.” Not an easy proposition for a banker who has a foot on both sides of the disruption.

“I love the new frontier and the bank of the future with PurePoint and I love taking elements of PurePoint and slowly injecting them into Union Bank to advance our business on the West Coast,” Habis explains. (PurePoint branches are not located in the western states where Union Bank has branches.)

He says banking leaders must ask themselves with everything they tackle: “Is it better? Is it faster? Does it create more value for consumers and the institution?” “If you have trouble answering ‘yes,’ to all three,” Habis maintains, “you need to stop and look at your own life” — how you shop and behave — and then ask, ‘What should I be doing differently?’ within your institution.”

“This industry is ripe for change,” Habis declares. “We just need to get it done.”