Subscribe Now Get The Financial Brand Newsletter for FREE - Sign Up Now
The largest retail bank in the U.S. is rebranding and rolling out a new corporate identity. The megabank is also tweaking its positioning to achieve greater alignment between the brand and the bank's mission to "respect the power of consumers" and help them achieve their goals. CMO Meredith Verdone sheds light on the timing, the strategy, and the scope.

In a curious twist of timing, the two biggest retail banks in the country — Bank of America and Wells Fargo — rolled out new logos and updated brand positions within just a few weeks of each other.

Similar to the direction Wells Fargo chose, Bank of America opted to modernize rather than replace its 20-year-old logo — only slightly tweaked. A darker, richer shade of blue was used, and the stylized flag emblem was simplified and organized. The “flag” now has more white space between the color bands, and the bank’s name is now typeset in all capital letters with the lettering stretched out, giving it a more modern look. The new logo is accompanied by the slogan, “What would you like the power to do?”

Comparing the new logo (top) against the previous logo (below). The bank worked with the team of international brand design experts at Lippincott.

In the wake of the financial crisis of 2008, BofA’s reputation was in the dog house. But its brand has rebounded strongly since, whereas Wells Fargo is still suffering from a battery of scandals and fines. Six years ago Motley Fool ran the headline “Inside America’s Most-Hated Bank”, with a long article excoriating Bank of America’s flawed business model and culture.

Two years later, in 2015, Bank of America settled with the last of the major claims stemming from the financial crisis with the Department of Justice. It has been quietly rebuilding top-to-bottom ever since.

As The Wall Street Journal describes it, CEO Brian Moynihan has been “pursuing a strategy of ‘responsible growth’ with ‘no excuses’ that values stability over swagger.” The $2.3 trillion bank has chosen to deal with less-risky customers and provide them with fewer products, and do so efficiently using automation and digital applications.

Even so, for a company that employs nearly a quarter million people, has 67 million U.S. customers, and blankets most of the country with 4,400 branches, any change carries risk. So far, however, the new brand repositioning seems to have largely avoided being trashed in the social media/web crucible.

Armin Vit, one of the world’s most well-known and respected corporate design critics, says BofA also needed to update its logo so that it would work better in digital channels.

“The goal here was a subtle evolution that allows the original design to adapt to 20 years of technology and aesthetic changes with an execution better suited for today’s uses,” Vit says in his analysis. “The new icon is a more literal interpretation of the American flag where all the stripes are equal weights, so there is a valid conceptual reason to thicken the counterspaces that, in turn, allow the icon to reduce much more than before. Perhaps the best testament to the redesign is how well the logo works in single color and in smaller sizes.”

The BofA repositioning has been in the works for more than a year, but Meredith Verdone, Chief Marketing Officer, tells The Financial Brand that a key factor in moving it forward was the bank’s improved customer satisfaction scores. 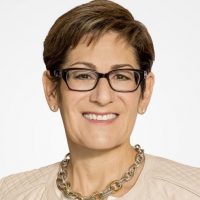 “One of the things we asked internally was, ‘Do we have the credibility to tell that story?’ It was important for us to know, ‘We’ve hit a pivot point,’ in terms of improvement of our customer experience — especially over the last five years. That allowed us to be a little more expressive about some of the things we’re doing.”

As evidence of this pivot, Dean Athanasia, co-head of Consumer and Small Business at BofA, told Euromoney in mid-2018 that “Our latest data is that 81% of customers now rate us nine or ten on a ten-point scale.”

The bank has also notched high marks from several external sources, including the number one ranking among traditional banks in the U.S. for both mobile banking and online banking functionality from Forrester in 2018 and 2017 respectively.

The bank isn’t perfect, however. It came in only “about average” in J.D. Power’s “2018 U.S. National Banking Satisfaction Study” behind Chase, PNC and U.S. Bank. Still, Euromoney named Bank of America “World’s Best Bank” for 2018, and a different J.D. Power study, shows BofA ranking number one in customer satisfaction for retail banking advice.

Verdone also points out that over the past ten years the bank has also been working to greatly simplify its product set. It slimmed down from an astounding 1,400 products to 65, on the consumer side alone.

The multi-year brand repositioning kicked off with a television ad in the fall of 2018, featuring CEO Brian Moynihan observing commonplace scenes of life on his commute to work with a voiceover saying, “‘What would you like the power to do?’ Listening to how people answer this question is how we learn what matters most to them. This is why we’re here. And above all else, it’s really what people want from us.”

Verdone says the phrase, “What would you like power to do?” is intended more as a thought-provoking conversation-starter than a tagline in the most classic sense. “What we love about the question is that it’s about listening and understanding what matters most to our clients. And then it helps us frame our capability based on what matters to them.”

The phrase does replace a traditional tagline — “Life’s better when we’re connected,” which has been in use by the bank since 2013. “Our strategy hasn’t changed,” Verdone explains. “It’s just how we’re expressing it that is changing, a little bit — moving away from this idea of life connected.” That argument makes sense, since everyone now takes for granted the hyper-connected digital world we all live in.

The “power” theme was initially rolled out for the bank’s marketing to business and institutional clients, according to Verdone.

“How we market the company is becoming much more unified,” Verdone states.

Big, Meaty Issues for the Launch

Over time, the campaign will feature clients, communities and partners. The first phase, which ran through the holiday period, told the stories of founders or leaders of six of the bank’s long-standing partners addressing social and environmental issues. Among them were Tory Burch on empowering women, Ken Burns on producing documentaries, Matt Damon on providing access to clean water, and Tim Shriver on the Special Olympics.

“We purposely chose partners who are making a difference in this world — dealing with really big, meaty problems that are hard to solve,” Verdone states. “These people are the ones who are doing the work day in and day out. We wanted to give a sense of the impact when you put a company of our size and scale to work — through sponsorship or capital deployment — helping to tackle some of the trickiest problems in the world.”

This and other phases of the campaign will be featured on television, digital video, mobile, social media, and print. The Hill Holliday and Super Union ad agencies developed the campaign.

Moving forward, BofA will apply the same concept across all of its lines of business — consumer, high-net-worth, small business, and business banking.

For the consumer part of the campaign, Verdone notes that the slogan “What would you like the power to do?” is really about ambition and achievement. “It’s not about the power to get a better rate,” she explains. “That’s transactional. People think in terms of things that they want in their life — how they want their kids to have a better future than they did, for example.”

This positioning change from products to aspirational better reflects the bank’s internal restructuring of recent years. “We are no longer run by individual product divisions as we were in the past,” noted Dean Athanasia in Euromoney. “We are now run as one customer division that makes the best decision based on a holistic view of each individual.”

The Importance of Authenticity For Brand Purpose

The process of how Bank of America decides which organizations to include in a marketing campaign — and more broadly, the right tone to take in its ads — is quite rigorous and extends beyond the Marketing Department. Part of it occurs at the company level, Verdone explains, overseen by one of her colleagues, Andrew Plepler, global head of ESG (environmental, social, governance).

“Everything we do is aligned to our business and is rooted in our brand purpose,” Verdone told Business Insider. “So when we do things, like our 30-year partnership with Special Olympics, it is because we value inclusion. … We actually [have hired] 400 people with intellectual disabilities.”

In terms of content and tone of its ads, Verdone avoids “cause marketing,” but willingly incorporates examples of things that reflect the bank’s values. She wouldn’t hesitate to cast a same-sex couple in an ad, for example. “It goes back to what we promote internally,” the CMO says. “Same-sex is a great example of our focus on diversity. In other words, it’s real. It’s authentic to what we’re doing. So casting a same-sex couple would be in line with what we believe the world looks like.”

How the CMO Job Has Changed

Verdone readily agrees that ensuring that actual customer experience is in synch with what marketing promises is part of a CMO’s job description now.

“As the world has grown more digital, marketing is less about just putting messages into the marketplace and more about what is the desired experience across different channels,” Verdone explains. She says the biggest change she’s seen in her career is moving from just telling the story to combining the story with the experience and effectively measuring it against a longer-term view.

To enable that, “we have to organize ourselves so we can react or respond or engage with our clients more quickly. Whether you want to call it ‘agile’ or another term, bank marketers need to match the pace of what customers expect from any other brand. The bar has been raised on customer expectations.”