Every time you start to think the financial industry’s fixation with Twitter may be easing, something completely new comes along and shakes things up. Like this stunner: TweetMyMoney, a new fully-proprietary innovation from Vantage Credit Union that allows people to access account information and make transfers via Twitter.

With the revolutionary new service, members can check their account balances, deposits, withdrawals, holds and cleared checks with simple commands. They can also transfer funds within their accounts. And it can all be done through Twitter for free.

Once you’re an online banking user with Vantage Credit Union, you can register for TweetMyMoney instantly. You can do both online.

Then all you do to make it work is send a direct message with a basic command to Vantage Credit Union’s Twitter account (twitter.com/myvcu).

How registered users can request their balance by sending a direct message to Vantage within Twitter. 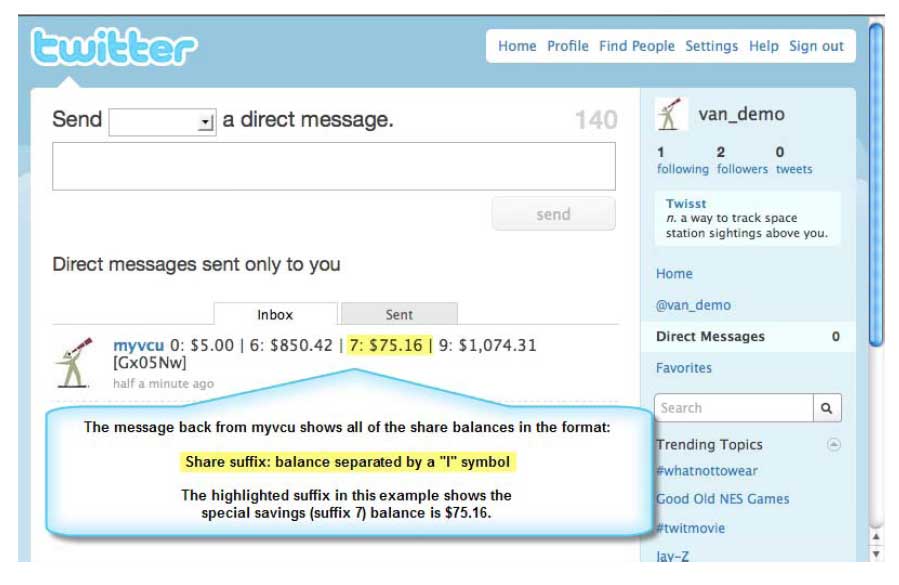 What Vantage sends to someone who requests their balance via Twitter.
Note: In this example, the member has 4 separate accounts (numbered 0, 6, 7 and 9).
The #bal command returned balances for each of the four accounts.

There’s no shortage of tutorial videos and documentation. Most curious parties should be able to get most — if not all — of their questions answered by reviewing the library of materials Vantage provides:

How Secure Is It?

If you’re like most people, you’ll immediately wonder about the security of such a system. But Vantage seems to have done a good job ensuring its new system is secure. The credit union devised its own Correspondence Authentication Codes that puts a special six-digit “signature” in digital communications such as eAlerts, eStatements, and, of course, banking information delivered via Twitter. It’s a very slick yet simple idea that is summarized in a short video.

The real security within the TweetMyMoney platform is that money can only be transferred between accounts held by a single member. There’s no way to use TweetMyMoney to deliver — or pry with malice — funds externally.

And if the TweetMyMoney Twitter account is ever hacked, Vantage says the hacker wouldn’t have access to any private or sensitive information. Tweets sent directly to members aren’t saved, and private messages from members would only contain meaningless commands. There really wouldn’t be much for a hacker to utilize. (Of course, a hacker controlling a financial institution’s Twitter profile doesn’t need anything else to wreak havoc and steal people’s money.)

In an interview with The Financial Brand, Eric Acree, EVP/Vantage Credit Union says TweetMyMoney is the first step in a four-prong strategy centered around mobile banking. Vantage chose Twitter to debut its online banking offering because it was “the easiest and least expensive” option.

In phase two, the credit union plans on unveiling essentially an identical set of features and services via Facebook, which Acree thinks should be ready around Q1 next year.

Further on the horizon, in phase three, Vantage is considering introducing SMS- or text-based banking from mobile phones. In the fourth and final stage, Vantage wants to unveil an iPhone application. Acree says no plans have been finalized yet.

“It something we have to carefully consider.”

Acree says it took only three months to conceive and deploy TweetMyMoney, but says most of the credit belongs to Vantage Credit Union’s chief “Technovation Guy,” Cam Minges.

Acree says the strategy is designed to target a younger demographic with services they find attractive.

“Seventy percent of our new members are under 40,” Acree points out.

With over 100,000 members, Vantage is hoping TweetMyMoney will ultimately have a base of around 4,000 users.

Despite his optimism, Acree is not blind to the realities of launching Twitter-based banking.

“We know this isn’t a mass-market service,” he admits.

“People will have one of two reactions to TweetMyMoney,” Acree predicts. “They’ll either think, “Wow, that’s awesome!’ or, ‘Oh my gosh, that’s stupid!’”

“And that’s what we anticipate will happen when we roll out our Facebook application,” he reflects candidly.

For many months now, the retail financial industry has found Twitter both fascinating and puzzling. A few financial institutions have enjoyed some success offering customer service through Twitter, but the vast majority have struggled to integrate the popular social media tool into their marketing in any meaningful way.

Earlier this summer, ING Direct Canada launched its FeeTweeter service, the first-ever Twitter application from a financial institution. Now, with the launch of TweetMyMoney, it seems the financial industry is taking Twitter to a whole new level. It makes you wonder, “What’s next?”