Subscribe Now Get The Financial Brand Newsletter for FREE - Sign Up Now
The scope and speed of evolution in regulation, customer behavior and technology – coupled with the emergence of new competitors – mean that the future of banking will not be a continuation of the past. New technologies will transform banking as we know it, providing both opportunities and challenges for financial institutions.

If personal user experiences can be enhanced by augmented reality (AR) or virtual reality (VR), then it can also be institutionalized by banks to revolutionize the banking industry. The possibilities are are still in early embryonic stages, with testing being done worldwide.

For instance, the Commonwealth Bank of Australia targets bank customers looking to buy or sell a home. Augmented reality and rich data are used to provide historical information about property sales, price tendencies, current listings, and properties that have been sold in the area. This insight helps individuals make smart sale and purchase decisions.

According to analysts, augmented reality and virtual reality could be utilized to give bank customers autonomy in terms of at-home banking. Hybrid bank branches could also come into existence.

Quantum computing represents a major leap forward in computing power, surpassing the potential of the cloud or blockchain. However, it will likely be years before it is widely used in business applications, due to many stability and security concerns. Despite this extended timeline, firms like JPMorgan and Barclays are part of a group investigating quantum computing potential in conjunction with IBM.

The impact of smart machines (smart vision systems, virtual customer assistants, virtual personal assistants, smart advisors, other natural-language processing technologies, etc.) will have on financial institutions during the next few years is beginning to take shape.

From applications for Amazon’s Alexa to bank developed virtual assistants like Bank of America’s Erica, the future of smart machines acting as digital concierges on behalf of consumers is upon us. The banks and credit unions that invest in better digital engagement will have more profitable relationships with customers. At the end of the day, customers will continue to self-select the bank that provides the least amount of friction and the most relevant support and guidance.

Can the Banking Industry Keep Pace With Emerging Technologies? 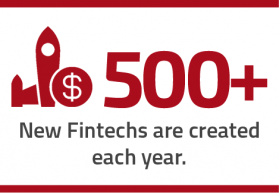 As quickly as past technologies have become the norm, a new wave of emerging technologies will combine digital technologies and the power of data to set new standards. The prioritization and investment in each of these technologies will vary based on the business model and strategic goals of each organization. For instance, while the marketplace as a whole does not foresee investing much in blockchain technology, the financial services industry ranks this as a high priority.

Most organizations recognize that there is a significant skills gap that puts transformation efforts at risk. According to PwC, “Respondents say skills in their organization lag across a range of highly important areas, including cybersecurity and privacy, business development of new technologies and user experience and human-centered design. Worse, skill levels have declined even as the demands of digital keep advancing.”

It is important for all financial organizations to make emerging technology a ‘core competency,’ with engagement throughout the organization (not just the very top). In addition, the focus of every implementation must be both internal and external human experiences, as opposed to revenue, profit and cost savings.