In the next few years, video advertising in U.S. will soar past $100 billion. Less and less and less will involve traditional TV. Banks and credit unions will increasingly need to shift their TV advertising budgets over to digital video if they hope to get their message in front of their audience. And that means YouTube.

Digital technology has spawned dozens of video alternatives to traditional TV, making the medium wider, deeper, and even narrower — all at once.

“Viewing is now dictated by our personal calendars, not by a network programmer,” says Google in an online educational presentation. “The term ‘broadcast’ doesn’t even really apply anymore.”

And if you spend any amount of time on YouTube, it’s nearly impossible to find a video — whether it’s a scene from your favorite movie or advice on how to repair your lawn mower — that doesn’t have a video ad preceding it. Longer videos on YouTube may be interrupted by a “mid-roll” video ad multiple times. 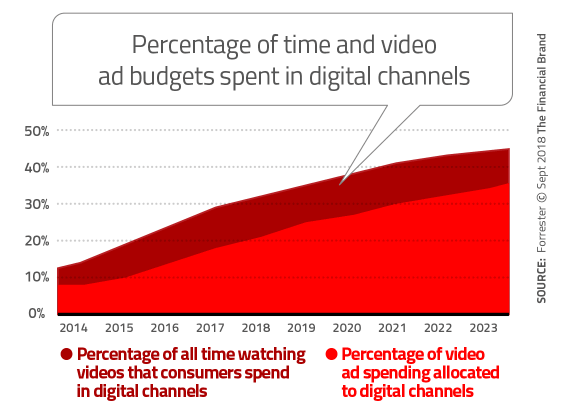 The Interactive Advertising Bureau reports that nearly 60% of marketers’ digital advertising budgets for 2018 was allocated specifically to online video. According to that report, financial services advertisers increased their expected spending on digital and mobile video advertising by 53%, on average, over 2016 levels. Ad spending by financial services companies on original digital video — video produced specifically for internet distribution, as opposed to re-purposed content from traditional TV — is expected to rise even higher, on average by 79%, compared to 2016.

There’s an ongoing tug of war between an evolving traditional TV industry and digital video’s new forms. Forrester says that the U.S. audience for traditional TV is currently sitting around 258 million people. But online video is catching up quickly, projected to surpass 201 million views in the U.S. alone this year.

“U.S. viewers have an increasing array of options for watching video content,” says Brandon Verblow, Forecast Analyst at Forrester. “With a finite population and hours in a day, TV’s grip on viewer attention is beginning to loosen.”

According to the IAB, 70% of consumers globally watch digital video content at least once daily, and 53% stream several times each day. Two thirds of consumers worldwide have live-streamed video. More than half of them prefer free viewing supported by advertising.

Verblow and his team advise that “advertisers must continue to diversify their video ad budgets to ensure effective delivery of their message in this increasingly fragmented environment.”

Indeed banking providers are already participating in this rapidly evolving digital video market. But this whirlwind of change has complicated marketing decisions for traditional financial institutions, starting with how — and where — they should allocate their budgets.

Online digital video advertising isn’t just for big brands and megabanks, either. There’s a lot right on the web that financial marketers can explore. Even the tiniest advertisers can experiment with video marketing on YouTube. The site offers tips to those who don’t have a video message to show yet. Video advertising has become more pervasive overall, and appears in multiple forms.

Advertisers can pick and choose among opportunities for a more efficient overall buy. But concocting the right mix of places to be seen, however, and the type of message to be delivered on each can be a daunting challenge.

Jim Nail, Principle Analyst at Forrester, says that marketers must update the old one-size-fits-all approach if they hope to fully exploit all the opportunities digital video presents.

“As consumers’ video consumption habits become a smorgasbord of viewing options,” he says, “marketers must offer their morsels in different places and portions.” 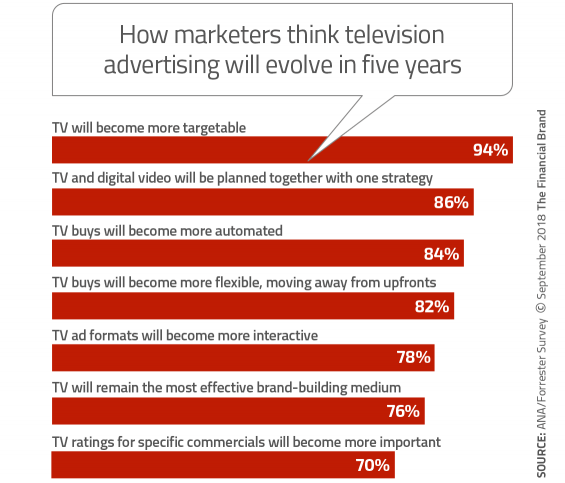 The challenge for larger players, as video marketing platform Innovid put it, is that “digital video advertising needs to be more precise, strategic, and personalized across all devices and channels.”

“It’s like a kid’s puzzle,” as one advertiser explains in a Forrester report. “At a certain age, a kid can do a 100-piece puzzle. We’re now dealing with the 1,000-piece puzzle, and we have to put all the pieces together to find a way to reach our audience in the same mass way.”

According to Forrester, two-thirds of U.S. adults will tolerate ads in order to have access to free streaming, and they prefer streaming with commercials versus waiting for their shows to become available online without commercials.

“As free streaming has grown more popular, so has YouTube,” Verblow explains. “Its product execution helps drive the market.”

The report finds that beyond being free, YouTube’s user experience is improved by the wide variety of content it carries and the ability of its algorithm to recommend additional, well-matched suggestions for viewers.

Forrester counts social media video on all other social media channels separately from YouTube. In 2017, the firm says, 37 million people watched social network video where the content was put up in hopes of monetizing it — excluding personal video sharing among friends and family members. While that is small in terms of the overall online video usage, Forrester notes that social has considerable prospects for growth, with usage increasing along with advertiser awareness of this channel. 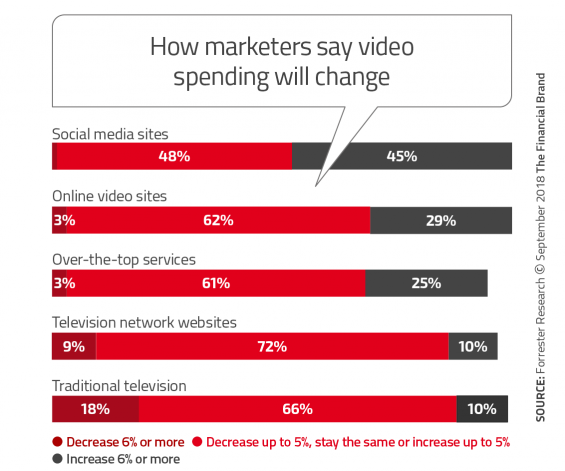 “In addition to preroll and midroll ads served within social video content, video ads on social media can be shown as standalone ads in the news feeds,” Forrester says. “As a result, overall social consumption and users also drive social video ad spending.”

Forrester projects that from 2018 to 2023 social media ad spending will rise at a 20.8% compound annual growth rate, almost twice the projected CAGR for display video of 10.9%.

The firm’s research among professional marketers indicates plans for stronger use of social media sites for video spending, with social video ad spending growth of 6% or more ranking highest among social sites.

Spreading Your Bets Around

Forrester believes technology such as advanced TV and addressable TV permit advertisers to target segments for their messages. Partly this is being driven by the increased desire to make marketing buys on the basis of data. 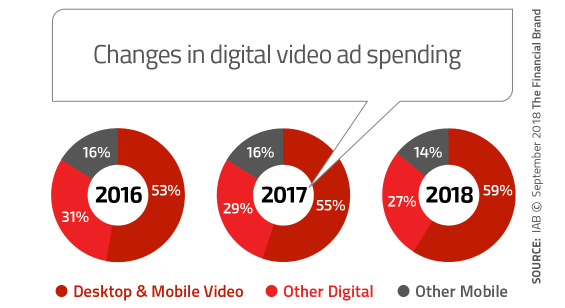 So what does an “omnichannel video effort” look like? It certainly doesn’t mean putting chips on every spot on the table. Instead, Forrester recommends a mix of video placements and creatives designed for customers at various points in their “purchase journey.”

“A diversified approach is particularly important for reaching younger customers,” the firm states, “who are more likely to consume digital video. Older Millennials (ages 29 to 37) are nearly three times as likely to subscribe to a vMVPD as Gen Xers (ages 38 to 51).”

Also this: Don’t become a pest.

“The ultimate goal of video advertising is not to deliver a target number of gross ratings points (GRP) or impressions, but to reach the maximum number of qualified consumers with enough frequency as to be effective and not so much as to be annoying,” Nail says. “This has always been a challenge for TV, and it has become an even bigger challenge as viewing on streaming services cuts into viewing on TV. Although GRPs and impressions remain currency in the marketplace, they obstruct when the campaign goal is not to reach 70% of the adults age 18 to 49, but to reach 70% of true potential customers.”

New ways of delivering digital video mean a growing lexicon of terms to describe the various channels, audiences and formats. Here’s a few good ones financial marketers should know:

In-Stream Video Ad -Played before (pre-roll), during (mid-roll), or after (post-roll) a streaming digital video. These ads cannot typically be stopped from being played.

Dynamic Video – Video ads customized in advance and/or able to transform itself upon delivery to target relevant audience segments. Customization may include delivering a specific combination of ad content such as the copy, the background images, and the size and color of the call-to-action button.

Cost Per View – A pricing model where the advertiser pays every time their video ad starts playing. Typically sold in blocks of 1,000 impressions.

vMVPD – Virtual Multichannel Video Programming Distributors are services like Sling and Hulu Live that take programming produced for traditional TV and redistribute it via the internet. Forrester identifies this as having the most potential for growth among all forms of TV.

Smart TV – A hybrid TV connected to the internet and interactive features.

Advanced TV – Technology built on internet rails that enables advertisers to target who their video ads go to, so that three people in the same household watching the same program might see commercials based on their demographics, not one ad for everyone.

Addressable TV – One of several variations on Advanced TV, this permits “advertisers to purchase audiences as opposed to traditional methods of buying based on programming,” according to IAB. The organization says there are roughly 64 million addressable households in the U.S.

TV Everywhere -An online business model in which television broadcasters, particularly cable networks, allow their customers to access live and/or on-demand video content from their networks through Internet-based services