Subscribe Now Get The Financial Brand Newsletter for FREE - Sign Up Now
Pretend you're a bank manager. A customer walks into your branch to make a deposit. His check is from a bank in Michigan, but the routing number is tied to a bank in Ohio. Would you call the cops and have the guy arrested?
Subscribe to The Financial Brand via email for FREE!

An ordinary transaction that plays out thousands of times every day across America went awry in Wichita, Kansas.

On September 6, a customer of Emprise Bank tried to deposit a $151,000 check — proceeds from the sale of his home in Dearborn, Michigan — into his checking account. He and his family had recently relocated to Kansas so he could continue pursuing his doctoral degree in mechanical engineering at Wichita State University.

But instead of depositing the check, the bank’s employee called 911 to report a forgery was in progress. According to the 911 call, the teller reported that a “fake” check that had been washed and altered was being presented by an “overly friendly” man who appeared to be “Pakastani.” The employee also said the check was from a bank in Michigan, but the routing number was from a bank in Ohio.

Just before 1:00 pm, four squad cars from three different law enforcement agencies responded to the call — one from the Kansas Highway Patrol, one from the county sheriff’s office, and two Wichita police officers. The customer was handcuffed and questioned. His wife and 15 year-old daughter, who were waiting for him in the car, were surrounded by more police cars. Then the entire family was then taken down to the Wichita Police Department.

“It was pretty straightforward that this, in fact, was a valid check.”
— Capt. Doug Nolte, Wichita Police Department

According to the police report, detectives working in the Wichita Policed Department’s financial crimes division were able to verify that the check, was in fact, real. They apologized for any misunderstanding and released the family… hours after the customer had showed up at the bank to make the deposit.

Reality Check: If someone can verify a check is good at 3:00 pm in the afternoon, then it should have been good two hours earlier when it was initially presented for deposit… before the cops were called and an entire family was hauled off to jail.

Emprise Bank also apologized to their customer, Sattar Ali, and the next day released the following statement:

“We are aware of a situation at the 21st and Woodlawn branch yesterday and can confirm that our team acted in accordance with our policies and procedures. If faced with the same circumstances today, we would expect our team to take the same actions.”

Ali, who was born in Iraq but has American citizenship, believes racial profiling may have played a role in the bank’s response, and told the Wichita Eagle that his family is now “living in fear.”

“I’ve lived in the states for almost 30 years, and I’ve never experienced that,” he said. “I didn’t know what was going on or why the arrest. I’d never been in handcuffs before in my life. We were placed in cells. Later, they came and said, ‘You are free to go.’” 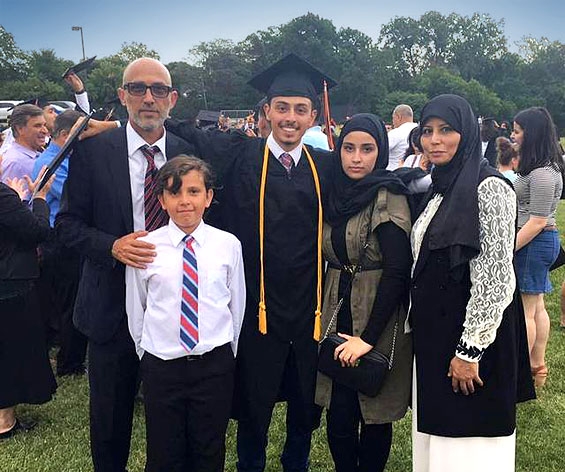 “What should this family have done differently?” said Tom Digger in one of the comments on KAKE’s site. “They had a check! They went to deposit it! They did not try to cash it or get any money! And the bank called the police?? For depositing a check!? That is insane! What happened to the days when they gave new customers a toaster!!?

“At Emprise Bank, we do not tolerate discrimination of any kind. We are sorry that a situation, which occurred in our branch last week, made our customer feel otherwise.

Emprise Bank does not control who or how many law enforcement officers respond to a call, but we rely on their experience and expertise to determine the appropriate next step. For reasons unknown to Emprise Bank, the situation escalated once law enforcement became involved with this customer in our branch and later with his family who was outside in a vehicle.

Last week, we apologized to our customer in person and by letter. We assured him, and want to assure others, that the decision to contact law enforcement was solely based on our internal procedures related to verifying fundamental security features and the routing number of a check. When we were unable to do that, we called law enforcement for assistance.

We sincerely regret the trauma our customer and his family experienced. We realize that a delay in our public response may have been interpreted as lack of concern over this situation. That is not the case and we apologize for the delay. Emprise Bank remains dedicated to treating all of our customers with the dignity and respect they deserve.”

The Wichita Police Department posted a detailed timeline of the events on Facebook and has also issued multiple apologies. Chief Gordon Ramsay said that although officers followed policy, he feels bad for what happened.

“When unfortunate situations such as this one arise, it creates an opportunity for dialogue between the police and the community. That dialogue can help us improve.”

All the explanations, backpedalling and apologies had little impact in the court of public opinion.

“Outrageous. Even worse the corporate HQ for #EmpriseBank stands by the branch’s actions and this is standard procedure,” said one person on Twitter.

“You’d think this all could have been discussed inside the bank sitting in chairs over some coffee. Why do you need to cuff and stuff someone and his entire family?”
— Comment on Local Press Coverage

On the bank’s Facebook page, Brian Woods said Emprise wouldn’t be judged quite so harshly “if the CEO had said something along the lines of, ‘this should not have happened, and we will take every measure to ensure this does not happen again’,” but that isn’t what he (and others) heard from the bank’s PR team.

Nine days after the initial incident, Emprise had accrued over 250 comments and nearly 200 reactions on Facebook. The feedback — which was overwhelmingly negative — then spilled over to the bank’s review section. Emprise Bank’s Facebook page rating dropped to an average of 1.7 on a five-point scale. Before its removal from public view, the section was littered with more than 500 one-star ratings and negative reviews.

“I am a business owner and I deposit multiple (sometimes large) checks on a daily basis,” said Kevin Peterson on Facebook. “I will not bank with an organization where I fear that I, or my children, will be detained by the police because either one of my clients wrote a bad check or it was unverifiable. That is what a hold on funds is for. You need to rethink this apology and stop this policy.”

Most people — including The Financial Brand — have more questions than answers.

Emprise Bank expressly declined to answer any of The Financial Brand’s questions concerning this matter.

“Would police have been called for a possible attempted forgery if you were a middle-age white man? Bank executives say yes and are adamant that race was not a factor. But would four law-enforcement officers normally arrive for a call about a possible forgery? Would you have been handcuffed and detained by police? Would your wife and 15-year-old daughter, waiting in the car, have been detained if they weren’t wearing hijabs? There are some who think this isn’t a big deal, or complain that everything has to come down to racism. But they probably aren’t Muslim. Or persons of color. Or of any minority.”
— Wichita Eagle Editorial Board

Was It Worth The Backlash?

Many observers suggested that Emprise needs to consider how its business practices affect its customers and the bank’s reputation.

“Looks like someone overreacted,” said Anton Zuykov. “Maybe the procedures have to be reviewed somehow?”

Keith Henning didn’t care for either the policy or the PR spin the bank tried putting on its public statement. “That’s not an open and transparent statement,” said Henning. “Post your procedures. Where does it say to call the cops? Did you call the issuing bank? Did you agree to deposit it, and put a 72-hour hold on the funds?”

Myron Jackson agreed a better explanation, including clarification of their policy in such a situation was due. “Rather than say ‘oops we called the police on a legitimate transaction’ they say they’d do it all again. Not so much an apology for what they’re trying to pass off as ‘policy.’”

“Are you saying you call the police every time a large check is deposited?” asked Diane Sherman incredulously. “The police have a better way to verify the authenticity than the bank? The depositor acknowledged it would take time to verify and your procedure is not to take the time, just call the police? Sorry, this argument doesn’t hold water. There is something else going on.”

In an interview with the Wichita Eagle, Teri Ginther, COO for Emprise Bank stressed that any concerns stemmed exclusively from the check, not the individual making the deposit.

“I can’t state strongly enough that we do not tolerate discrimination of any kind at Emprise Bank. Ever.

Ginther said the Emprise employee who made the 911 call “was confident” she was dealing with a fraudulent check.

“We have to rely on the judgment of the tellers observing the check,” Ginther told the Wichita Eagle.Wichita police Captain Doug Nolte said detectives ultimately verified the legitimacy of the check by calling the people who issued it.

“It was pretty straightforward that this, in fact, was a valid check,” Capt. Nolte said. “The bank could have done the same thing.”

Emprise is still trying to figure out why they were unable to verify the check when police detectives could.

Closing Thoughts: When an entire family can get arrested for trying to deposit a perfectly legitimate check, there is obviously something seriously wrong with the paper-based payments system here in America. Regardless of what the law says or what the bank’s policies state, there is a better way situations like this can handled. And you really have to wonder what would have happened if Sattar Ali had tried using mobile deposit instead of presenting the check in person. Almost certainly he wouldn’t have been cuffed and hauled off to jail.