Subscribe Now Get The Financial Brand Newsletter for FREE - Sign Up Now
'Digital convenience' helps the top three banks acquire more new checking accounts than the next 17 largest banks combined. To win the battle for a smaller number of checking accounts 'in play' requires a better understanding of consumer profiles, attitudes, behaviors and trends.

The strength of almost any retail banking organization is determined by the ability to acquire new households. The competition for these new customers has never been greater, but the number of households shopping is significantly less than in the past. So, how should an organization position itself for growth?

The 2016 Omni-Channel Shopper Survey of U.S. consumers, conducted by Novantas, explored the profiles, attitudes, behaviors and trends of consumers who shopped for and/or opened primary checking accounts. The research found that the number of new primary checking accounts opened has dropped by half in the past decade from a ‘churn rate’ of 15% to around around 7%. This decline is attributed to very low deposit interest rates combined with a relatively stagnant economy.

The research focused on understanding four primary elements that can provide the foundation for a stronger checking acquisition strategy:

According to Novantas, “Banks need to develop a market-by-market, multi-lever approach to customer acquisition. While branch counts and locations remain a primary lever, they are losing primacy and now must also be integrated with other physical channels, digital banking, marketing message and brand.”

As opposed to segmenting consumers using traditional demographic identifiers (age, income, family structure), Novantas has found that the way a consumer interacts with a physical branch is the most accurate predictor of buying behavior. By dividing respondents into those who are more or less dependent on the branch in terms of actual banking transactions (“branch dependent”), and more or less attached to the branch in terms of the importance placed on it for a primary checking account relationship (“branch attachment”) a branch segmentation matrix can be developed.

While checking shoppers cut across all channel segments, the segments differ markedly in what they want from a bank, and accordingly have different perceptions about various competitors and are more or less open to different competitive sets. As a result, different banks — based upon specific market position, distinct capabilities and overall marketing — should have different prospecting targets. (Read more about the segments in the Novantas Report) 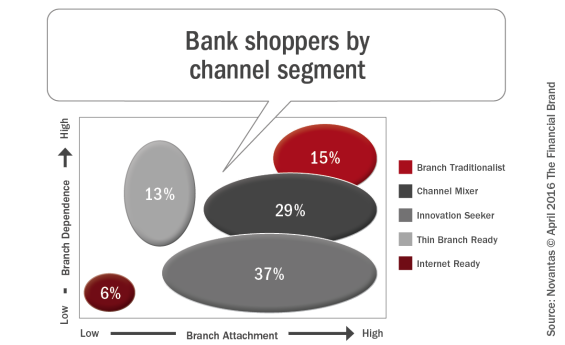 It does not come as a surprise that Millennials make up a disproportionate share of new-to-bank checking prospects. Most financial institutions have this segment as a primary target as noted in the Digital Banking Report, 2016 State of Financial Marketing. But as many organizations have discovered, the Millennial is a challenging acquisition target since national banks have been winning an especially high share of this segment.

In fact, the Novantas research showed that the three largest retail banks — Bank of America, Chase and Wells Fargo — outpace the next 17 largest retail banks in both drivers of account acquisition, as well as awareness and consideration stages of the shopping funnel. The good news for banks outside the top 3 is that Millennials with a checking account at a national banks are more open to moving. Sixty-three percent of Millennials who have their primary checking at a national bank also said they were open to switching that relationship, compared with only 51% of Millennials at large regionals.

In addition, a greater proportion of Millennials who may switch have higher incomes. Sixty-eight percent of checking holders under 35 have household incomes exceeding $50,000, a figure that approaches the 72% of prospective switchers aged 35 to 44. Older Millennials are also beginning to look like the next age cohort of older customers in terms of balances and products held. 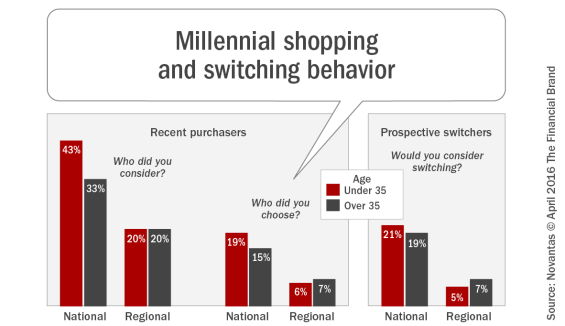 The ability to acquire the somewhat more demanding Millennial consumer will require regional banks and other smaller organizations to invest in digital channels and to shift resources towards digital marketing and away from physical branches.

Historically, banking convenience has been defined based on physical branch proximity to either home or work (or both). As banking technology has evolved, the need to visit a teller in the branch or even an ATM has declined. This had resulted in a redefinition of “convenience.”

“For the first time ever, simply having the nearest branch no longer defines convenience.”

For the first time ever, the highest ranking single factor in the definition of convenience is no longer proximity to a physical branch, but having “leading online and mobile capabilities”, which had 26% of the responses. The second most frequent
response was not having to pay foreign ATM fees (23%), followed by the availability of nearby branches (18%), having many branches and ATMs (13%), nearby ATMs (9%) and extended hours (6%).

The shift in the definition of convenience has been dramatic. In only one year, the importance of nearby branches fell 12%, while leading online/mobile capabilities rose by 6% and no foreign ATM fees rose by 5%. The change in the definition of convenience provides the opportunity to rethink branching strategies, potentially increasing the distance between physical branches.

Another impact of the new definition of convenience is that banks managing their physical networks by market can no longer use “branch share of market” as a correlation for checking acquisition potential. It takes more.

“High branch density is an increasingly costly and inefficient lever for customer acquisition,” says Kevin Travis, EVP and Head of Marketing and Distribution Strategy at Novantas. “There must be an integrated approach with other physical channels, digital banking, marketing message and volume, as well as brand. Indeed as the report reveals, perceived convenience, the biggest household acquisition driver, is highest at banks that have allocated investment to building share of voice, brand distinctiveness and digital capabilities and experiences.” 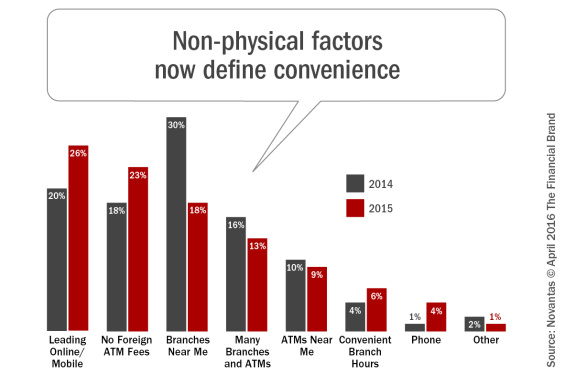 As the rate of consumers establishing new primary checking relationships has slowed, the battle for new checking customers has intensified. Adding to the challenge are the demands of the increasingly digital consumer and the decreasing importance of a physical branch network. Given the already positive impression of national banks as being able to provide better digital banking services and their established branch and ATM networks, how is a regional or local bank or credit unions supposed to compete?

Novantas found that being “distinctive” relative to other banks in a given market attribute generated a strong leverage of investments similar to branch share and share of voice. Attributes besides price Novantas grouped as contributing to “distinctiveness” included:

The more distinctive a bank was perceived in a local market, the more likely the bank wins new checking account purchases relative to its branch share in that market. Interestingly, there were a large number of bank-market instances where the bank acquired new accounts at a rate several times its branch share value. It is also believed that “distinctiveness” can contribute to both consideration and eventual purchase, having a multiplier impact.

Not totally surprising, the three largest banks also had an average “distinctiveness” index that was half again larger than the average for the next 17 largest banks. Combined with the benefit of both physical and digital convenience, the largest banks have a significant advantage in any checking purchase decision.

“In this challenging household acquisition climate, it is important for banks to understand who is shopping, what matters to these consumers, and how banks can best win their business,” says Chris Musto, a Director in Novantas’ Marketing and Distribution Strategy practice. “There is near term opportunity, however, for banks to capture new target segments who are potential switchers — especially Millennials, who represent the largest pool of prospective checking switchers.”